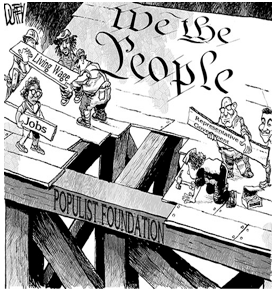 CRITIQUING THE LEFT-The echoes of Adolph Reed’s critique of the left in Harper’s magazine continue to reverberate. At its fringes, where the heat’s generated, it’s an argument about the relationship between the progressive movement and the Democratic Party. At its center, where there have been occasional glimpses of light, the talk is about building an independent populist movement that can affect real change.

That’s where the conversation should have been all along.

My initial assessment of Reed’s essay hasn’t changed. It started an important conversation – this one – and makes some telling points, but it’s diluted by score-settling and needless divisiveness.

Unfortunately those flaws are also reflected in many of the responses to it.

There’s an element of vehement agreement in all this. Reed doesn’t dismiss electoral politics, and his left critics uniformly agree on the need for a strong independent left.  So what are we really arguing about? People seem to have brought years of smoldering resentment to this conversation. It’s turning into a debate, not among people, but among peoples’ shadows.

Enough. We need to talk about transformation – social, economic, and political. In that sense Reed is right. His opponents are right to argue that electoral politics, while not central to the movement-building process, cannot be removed from the equation entirely.

Now can we talk about building that movement?

The latest entry in this battle royale comes from Mike Konczal, one of the best writers and analysts we have on the topics of economics and finance. Writing in the New Republic, Konczal allies himself with Harold Meyerson and other Reed critics.

(Meyerson’s is the best-written and most sensible of the Reed responses. But its primary flaw lies in its proclamation that today’s Democratic Party is less neoliberal than its 1990s counterpart. Not so. Its leaders on the Hill aren’t resisting the newest trade agreement because they’re more progressive. They’re doing it because there’s more public resistance now than there was then. Therein lies the key to future successes.)

Konczal’s opening gambit, which may have initially appeared devastating, actually undercuts his argument: “A Democratic president’s economic agenda is a failure,” he writes, “lost to business class acquiescence, the embrace of austerity, and an overall lack of vision.

“This was the conclusion of The New Republic, summarizing Franklin Delano Roosevelt and the New Deal in May 1940.”

Unfortunately, at that moment the criticism may actually have been correct. The New Deal faltered when Roosevelt prematurely pivoted to deficit reduction in the late 1930s. (Marshall Auerback has an excellent summary here.) The official unemployment rate in 1940 was 14.6 percent and was showing no signs of the downward slope that had characterized the early years of the New Deal.

The war changed all that. By 1944 the official unemployment rate was 1.2 percent. In other words, military necessity pushed Roosevelt toward the left’s agenda of massive industrial stimulus financed by deficit spending.

The real moral of the story? Even under a progressive hero like FDR, we needed an independent left. Imagine how much more one is needed today.

Like Reed’s, Konczal’s essay touches on many points without lingering. Konczal seems to dismiss the importance of divining President Obama’s or his party’s true ideology (especially his/its conservatism, or lack thereof). But it seems to me that that’s an important conversation to have, if only to shape tactics for the next several years. And surely it’s not irrelevant to discuss the Bill Clinton legacy, given the identity of the Democrats’ probable nominee?

Whoever wrote Konczal’s headline (it’s not always the person with the byline) intended to lay a mighty smackdown on the Reed crowd. “An Incoherent Harper’s Essay Suggests There’s No Difference Between Obama and Republicans,” it states, adding: “Left-wing naiveté about right-wing radicalism.”

But Konczal, like other rebutters, seems to agree with Reed in some key ways. He agrees that “liberals focus too much on elections and less on ideology.” And he paraphrases former neoconservative Michael Lind as saying that “liberals … fight over electoral strategies first, and hope somehow their first principles will fall out of all that action and energy somehow.”

That’s extremely well said, and I doubt that Adolph Reed would disagree. What’s more, Reed’s comments, both in his piece and subsequently, suggest he agrees with Konczal that there are still policy differences between the two parties. Reed believes that the two parties are “converging in policy,” not that there is no difference.

Konczal lays a strong emphasis on the extremism of the Republican right. He rightfully points to the states as hotbeds for far-right government activism. That’s a critical problem. But, whether you agree with him or not, it’s not one that Reed ignores. Instead, he argues that fear of the far right has been used to stifle challenges to the centrist Democratic Party orthodoxy from the left. That, too, is indisputable.

Both sides are right on this one. The radical right is a grave threat that can’t be ignored, but neither should it used to force corporatist policies on the Democratic base. But when should it be resisted at all costs, and when should the left abandon conservative Democrats? In the end that question’s more tactical than ideological. It won’t be solved in generalized debates like this one.

Konczal says this about Reed’s “converging policy” line: “This is the kind of stuff that drives liberals up the wall, and for good reason.” But if the two parties’ very real differences have been obscured, Democrats must take a large share of the blame. It’s true, for example, that “conservatives want to privatize Social Security while liberals wanted to remain a public program.” But Obama’s proposal for Social Security cuts obscured that difference, especially when he proposed expanded savings accounts at the same time. In health care, his abandonment of a public option reinforced a privatization wave that continues to sweep government at all levels despite a record that is spotty at best. And his anti-deficit rhetoric has been inarguably conservative, in an economic sense.

Mike Konczal should know as well as anyone that there are areas of convergence between the two parties, because many of them center on his areas of expertise: finance, economics and Wall Street reform. As we’ve seen in the last couple of decades, there is a conforming mythology in Washington on issues that from the power of free market capitalism to the deadly destructiveness of government deficits. Politicians like Elizabeth Warren and Bernie Sanders are conspicuous precisely because they don’t share it.

Reed was at his strongest when he was describing much of the modern “left” as the description of a “cultural sensibility,” an agenda that is strong on social issues but economically passive and politically pliable.  He was at his weakest when indulging in unwarranted negativity or excommunicating other writers by declaring them to be “ersatz leftists.”

His opponents are, in a way, his mirror image. They’re strongest when they’re trying to ground Reed’s abstract critiques in real-world contexts, and weakest when pouring out their resentment for leftists who don’t support the Democratic Party – or don’t support it enough.

Konczal is strongest when exploring the glimmering possibilities of the political present. He writes: “I see new strands focused on the politics of creating alternative spaces and institutions, notably in much of the work and thought central to Occupy. Others are focusing on re-grounding leftist politics and a critical re-engagement of work itself. I don’t see a convergence however. The question could use more engagement, including from Reed himself.”

More of that, please.

Konczal is excited about the issue of inequality as a potentially transformative topic, but agnostic on whether either the Democrats or the independent left will turn it to their advantage. “I’m not sure,” he writes, “but it’s worth finding out …”

Agreed. So why aren’t we talking about that? We’ve relitigated the past long enough. It’s time we concentrated on the vision – moral and cultural, as well as political – that’s needed to build a progressive and populist future.

(Richard (RJ) Eskow is a former executive with experience in health care, benefits, and risk management, finance, and information technology. He is a Senior Fellow with the Campaign for America's Future … where this piece was first posted … and hosts The Breakdown, which is broadcast on We Act Radio in Washington DC.)
-cw