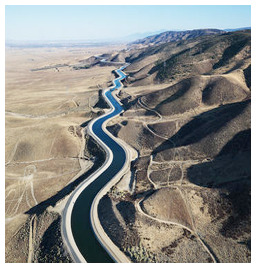 STATE DIVIDED- As all the Californians who celebrated the deluge of rain that fell the week before last know, it did not do much to ameliorate the state’s deep drought. We are likely to enter our traditionally dry spring, summer and fall in a crisis likely to exacerbate the ever greater estrangement between the state’s squabbling regions and classes.

There are two prevailing views about how to deal with the drought. Farming interests in the Central Valley want the state to fund construction of additional water storage capacity so that the 700,000 acres of some of world’s richest farmland now fallowed by steep water cutbacks can be put back into production.

The predominant view embraced by the media and ruling political class identifies the drought as yet another manifestation of relentless global warming, which means the focus should be on reducing greenhouse gas emissions. Greens balk at the idea of massive new spending on water storage for the agriculture sector, the state’s biggest water user, advocating instead for more conservation. New dams and reservoirs would have high environmental impacts, they argue, and their benefits may not justify the costs.

Yet many believe more storage is precisely what the state needs, including Democratic Sen. Dianne Feinstein, and the state Assembly’s Democratic leadership, under pressure from Republicans and Central Valley Democrats, recently added $1 billion in funding for water storage projects to a draft water bond proposal.

The southern part of the state, which tends to be drier than the north, has managed to avoid the worst of the drought by investing in its own storage facilities, something the more green-oriented north largely has avoided.

“Pat Brown understood you had to build capacity and store a lot of water,” former Salinas Mayor Dennis Donahue, a lifelong Democrat and radicchio grower, told me. “As a state we have decided not to build capacity that we could have built. To make this a morality tale about climate change is an insult to the 40% of people who are unemployed in some of our rural towns.”

California’s drought has become a national partisan issue, but storage is hardly a Tea Party or libertarian obsession. Hard-hit farming regions, in fact, are not calling so much for less government, but an expansion of water facilities largely owned and operated by state and federal agencies.

Their strongest arguments are economic and, equally important, basic social justice. California produces upwards of of the nation’s fruits and vegetables, and the economy of the interior, and much of the central coast, revolves around agriculture. The interior region suffered the brunt of the Great Recession in California but now must endure the lost of some $5 billion in farm-related revenues; 11 of the 20 metropolitan areas with the highest unemployment in the country are already located in the interior region of the Golden State.

Not surprisingly many in the interior and rural parts of California see themselves as victims of wealthy coastal counties, whose economies have been bolstered by rising stock prices and absurd home valuations in Silicon Valley. These people regard high-priced water, like expensive energy, as a relatively minor inconvenience. San Francisco actually depends as much or more as any place in California on imported water, but rich urbanistas do not make their living from growing food, manufacturing or logistics. For them, high prices for resources is a kind of moral penance for lives that contribute to the threat of global warming.

At the same time, the basic claim that California’s drought is an inevitable product of warmer temperatures seems a stretch. Anyone somewhat familiar with California water issues — as I have been for the better part of 40 years — knows that the state has a history of alternating wet and dry periods dating back hundreds of years. Indeed, while the most recent rains may not augur a new, wetter period, statewide precipitation has now rebounded to levels much closer to historic parameters.

To be sure, human-caused environmental degradation is real and must be acknowledged, but it’s clear that  droughts have occurred, in California and elsewhere, for thousands of years. Some have lasted for a century or more.  The worst dry periods, according to tree records, took place in the 1500s, somewhat before the first SUV hit the road. The 1860s saw massive rains and flooding throughout the state, followed by a severe drought that almost wiped out the state’s cattle industry.

In the last century, California suffered from severe droughts in the 1920s, the late 1970s and again in the 1990s; all ended when rainfall resumed in subsequent years. Even over a period in which greenhouse gas concentrations were increasing dramatically, three California droughts began and ended in much the same way.

More generally, the notion that the United States is entering an era of deep and abiding water shortage also remains dubious. A 2008 federal report on climate and drought concluded that the last decade was not as dry as either the 1930s or the 1950s.

Just a few years ago climate activists were claiming that a major drought throughout the Southeast was a clear harbinger of how global warming would affect everyone. Similar claims have been made for a recent drought in the Midwest. According to the U.S. drought monitor map, neither the southeast nor the vast majority of the heartland suffers from serious drought conditions. Indeed over the last year, according to the U.S. Department of Agriculture, the percentage of the country suffering any drought at all has dropped from 66% to close to 50%.

To be sure there needs to be more attention paid — in California and elsewhere — to water issues and conservation, as many greens suggest. But  that’s  no reason to abandon prudent water management, like storage, in the belief that massive desertification is inevitable. California’s Inland leaders are simply calling for  retrofitting and improving water facilities, many of which were built a half century ago, and create additional wet-period storage capacity. If it does not, a large part of the state’s heartland will return to a  desert more by fiat than climate, leaving behind a huge, largely unemployable, and predominately Latino underclass.

Fortunately, not all is lost. For all his sometimes obsessive concern on climate change, Governor Jerry Brown has proposed major improvements in the state water system, much of which was built by his father. In this, he has been willing to challenge the green interests, who inevitably will try to block any new facilities. In the past, even Brown has found changing any of California’s complex environmental laws very difficult given the power of the green lobby, particularly within the courts and the regulatory agencies.

Clearly the  more reasonable water conservation measures urged by the environmentalists should also be adopted. Vast lawns and golf courses watered from the Sierra make little sense in a state whose population and economic centers are totally dependent on imported H20. Yards consume more than half of California’s urban water supply; using more drought resistant plants — my family is replanting our front yard with desert cover — and expanding already available, highly treated recycled water for exterior irrigation are commonsense changes cities and towns throughout the southwest should pursue. Agriculture, which uses more that 75% of the state’s water supply, must also become more conservation-oriented.

Water-hungry crops, like rice and perhaps even cotton, may need to be phased out. More use should be made of drip irrigation, which is employed extensively in other dry climates such as Israel. A greater emphasis on California’s unique advantages for specialty crops like nuts, green vegetables and fruits inherently makes more sense than growing water-hungry crops in competition with more water-rich locales.

But unless Brown can fashion a compromise, the drought will continue to serve as propaganda fodder for the climate change community while promoting the demise of yet another basic industry, joining fossil fuel energy and, increasingly, manufacturing.

The social results of such an approach is already apparent in the state: the highest poverty rate in the nation and one-third of the nation’s welfare recipients.

It may seem moral to link this drought to warming for the sophisticates who control California, but from here, the whole approach seems pretty cold indeed.