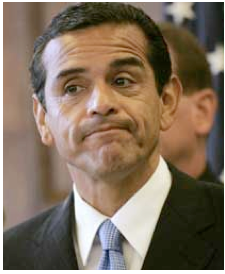 VILLARAIGOSA LEGACY IN QUESTION-Antonio Villaraigosa, the mayor of Los Angeles from 2005 to 2013, wants to be remembered as the guy who brought mass transit to LA, who smashed crime—and finally gave the city a real downtown. He is all about his legacy.

A relentless self-promoter who is now an appointed professor at the University of Southern California, Villaraigosa will soon be lecturing students about the fine details of managing a world-famous metropolis and, after years of covering—and tangling with—his administration, I have no doubt his planned memoir about leading the nation’s second-largest city will be a hoot.

But the twisting of Villaraigosa’s past was well underway before he handed over the keys to Eric Garcetti, LA’s 43-year-old “hipster mayor” whose father, Gil Garcetti, infamously lost the 1995 O.J. Simpson murder trial as the Los Angeles County district attorney.

In the weeks leading up to Villaraigosa’s departure in June 2013, political supporters constantly banged the drum that under the mayor’s watch LA had become safer, that he improved public transportation infrastructure and that he pushed forward a successful “green” agenda. Some of which is loosely true.

How true? Although crime dropped across the country over the past eight years, and Villaraigosa and the LAPD made a nonsensical claim that LA was as safe today as it was in 1956, the mayor did expand the police department to a little more than 10,000 sworn officers and violent crimes such as homicides and rape declined around 40 percent during his two terms.

In 2008, Los Angeles County voters approved a half-cent sales hike for 30 years in the form of Measure R, which Villaraigosa had furiously campaigned for. The tens of billions raised through that increase will go toward much-needed transportation projects and improvements, such as new bus operations, better freeways and, more controversially, rail lines.

Villaraigosa and his supporters often claim that the passage of Measure R was due to the mayor’s political wizardry. But the initiative just barely got the green light from taxpayers and a large crush of young people showed up to the polls to vote for Barack Obama, not Villaraigosa, and helped to put Measure R over the top.

With the so-called greening of LA, Villaraigosa pushed forward a “clean trucks” program at the Port of Los Angeles, which requires diesel trucks to meet tough environmental standards and has decreased air pollution at the nation’s largest port. But Villaraigosa also signed off on Teamster-friendly rules that made it very difficult for independent truckers to work at the port. Those rules have been challenged in federal court. Villaraigosa also announced a plan for LA to stop using coal-fired power by 2025. It sounded great, but as with many of his grand plans, it’s too early to say if that will actually happen. (Read the rest … including what the former Mayor’s legacy really boils down to … here)