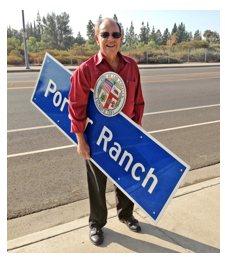 And no other candidate, including all the incumbents, received more than 159 votes--less than half that of the average winning total.

"Three hundred people came and voted who don't know a thing about our community," a longtime Porter Ranch activist complained to me.

"They just brought them over in a van from the Korean church across the street," another said. "Some didn't even speak English. They checked the right EmpowerLA box and they voted."

Some of the old guard alleged that the slate was assembled with the encouragement of ousted EmpowerLA General Manager BongHwan Kim, who left the department in July 2012 for a position in San Diego.  But Kim denied any involvement in the Porter Ranch coup.

"I’m not familiar with the church that you mention," the former General Manager told me via email. "In my position, I encouraged as many people citywide to get involved with NCs regardless of their ethnicity or faith." 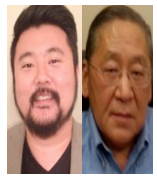 In LA, political consultants know that races came down to geography and demography. A slate of Korean-Americans swept out of office a long-standing Neighborhood Council board of Anglo-Americans and other-Americans, in a place that EmpowerLA calls, with some imagination, "Porter Ranch."

"Welcome to the melting pot that is LA!" Wendy Greuel campaign operative Michael Trujillo tweeted me, regarding the result.

But the Korean coup actually swept a melting pot aside.  Porter Ranch's board formerly boasted of lots of diversity.  Sent packing were an African-American board member and two Levantines, as well as a non-demoninational one.

Porter Ranch also happens to be one of the city's top targets for residential development.  The development is all slated for the area of new Porter Ranch in which most of the Koreans reside: tracts of freshly-built McMansions and newish suburban sugar cubes in the $500-$650,000 range.

"Srsly, that shit (PRNC) should be called the Chatsworth East Neighborhood Council, and had the development that was touted as 'Porter Ridge' on signs and billboards back in the 80's been built there in the hills where Nouveau Porter Ranch was built, it would be the 'Porter Ridge Neighborhood Council.' But I think the monied Koreans didn't like the horsey-rednecky insinuations associated with living up in the Chatswizzle," is the way one longtime Porter Ranch resident who now finds herself in another bailiwick put it to me after Saturday's shocking elections.

"Toll Brothers is buying Shapell and can reshape the remaining residential development in Porter Ranch.  Shapell is not a commercial developer and is likely to sell its remaining commercial interests to another developer," Pope added, tossing land use into the mix.  Pope himself endorsed two of the five winning Koreans. 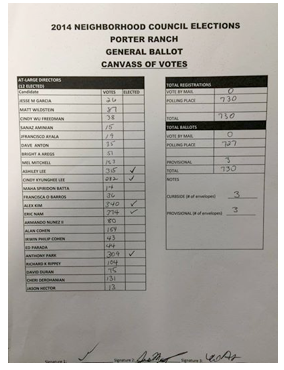 If this is all a little too much to process--even after the Silver Lake Neighborhood Council voted to no longer consider itself as "eastside"--know that the Neighborhood Council neighborhood that calls itself "Porter Ranch" looks nothing like the place most of us understand as Porter Ranch, which has evolved in the past two decades rather more speedily than most Angelenos outside of the community may know.

Porter Ranch The Neighborhood that everyone in the Valley knows runs roughly from Porter Ranch Drive on the west to Aliso Canyon Park on the east, with a couple of turnouts here and there, and extends south from the foothills south to the 118.

"That was the second largest demographic when were forming in 2001. We even did a steering committee flyer in Korean. Later, we established natural boundaries and that put the entire Shapell Compound in the PRNC boundaries," says longtime Granada Hills activist Kim VanKirk Thompson, of the original laying of the boundaries.  "That development IS Porter Ranch. It's legally Northridge. But it's really a ton of cul de sacs and a church."

Western Porter Ranch happens to be a prime tract target and developers will be only too glad to deal with the pro-growth Koreans rather than the slow-growth proponents who formerly dominated the board.

One developer wants to carve up the Santa Susannas into a tract of 188 homes and have the tract annexed by the City of Los Angeles.  If it were annexed, it would also be part of the Porter Ranch Neighborhood Council.  Another developer of luxury homes, Toll Brothers Inc., the largest developer of luxury homes in the US, just acquired local-to-LA developer Shapell, which has already built one of the newer developments in the ambiguous Chatsworth Hills/Porter Ranch/Porter Ridge area and which owns over 2,000 lots around LA.

Now five pro-growth Korean-Americans, including a 17-year-old, are in charge of community land use communications and recommendations in the stakes-and-Caterpillars chaparral.  Part of the anxiety of the remaining board (Porter Ranch elects board members for four years, but staggers the elections to follow the City's two-year cycle) is to learn exactly how enthusiastic for deluxe sugar cubes the new board members are.