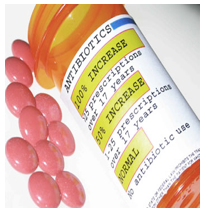 GELFAND’S WORLD-In the pantheon of scariest things, my generation used to worry about getting vaporized in a nuclear attack. As we got older and the Cold War waned, we worried a little more about things like getting shot at or getting cancer. But not too many of us have been worrying about bacterial infections. Perhaps we ought to, because we've been living in a brief paradise -- barely more than half a century -- where we can get a shot or take a pill to cure ourselves of what used to be humanity's worst horror. It is not yet certain that our antibacterial paradise is really a fools' paradise, but we have reason to be concerned.

There is a lecture series at LA Biomed, the research section at Harbor UCLA Medical Center, called Science Fridays. The most recent talk was given by Dr. Kevin Bruhn about the development of antibiotic resistance among some of the common pathogens, and what we might possibly do to find alternative treatments. (Disclosure: I have been at times a salaried researcher at LA Biomed and continue to maintain a relationship with a research group there. I don't have anything to do with the infectious disease research groups. Bruhn and I have been coauthors on 3 papers on a different topic.)

Bruhn began by reminding us that as late as 1931, humans had all the accoutrements of modern civilization except one. They had jazz and automobiles and radio and airplanes. They had whiskey and literature. But when it came to bacterial infection, they were at the same technological level as cavemen. If you got something, your system either fought it off or you died.

And plenty of people did die. I've written previously about the vast death toll, particularly among the very young, of diptheria. It is memorialized by collections of small gravestones in older sections of American cemeteries. An earlier generation of Americans remembered that the son of a president got a blister on his toe one day, and shortly after that, he was dead.

And of course (but our civilization has forgotten) pretty much any penetrating wound in any of the wars from the Civil War through the first World War was a nearly automatic death sentence. You can read a fictionalized account in All Quiet on the Western Front, but it represents the reality of the time.

Some years ago, there was an account of "The First Penicillin Shot" in one of the major medical journals. What was particularly interesting about the story was something that I had never really thought about. Prior to the introduction of penicillin, there were sulfa drugs that had some antibiotic capability. But in the case of deep infection that created a pocket of pus, there was nothing to be done but to drain it (if it was in an accessible location) and hope. Some patients existed with chronic deep infections that never really went away. The hospital wards that dealt with such patients were that era's equivalent to the worst kind of cancer wards of today's world. People survived, but suffered, often for year after year, and there wasn't really anything that medicine could do for the underlying problem.

Penicillin was the miracle drug for those kinds of cases when it became available. It was the first drug that combated those deep infections. It's contribution to the survival of wounded soldiers in WW II was enormous.

The problem for us is the fear that for some kinds of infections, the bad old days could return. A bacterial pathogen that becomes resistant to all of the common antibiotics is a real fear in the medical profession.

Maybe it would only be for some kinds of bacteria. After all, there are lots of different types of bacteria, almost as different from one another as humans are from lizards or mice. But for the person who gets a nasty pathogenic germ that is resistant to all known antibiotics, it's the year 1931 all over again. The characterization of increasingly bad bugs goes from antibiotic resistance to multiple antibiotic resistance to pan resistance. That last term represents the case where the doctor looks at the report from the clinical lab and finds the letter R (for resistant) opposite every antibiotic tested. You would prefer not to be that patient.

One not uncommon, scary strain with multiple resistance is known as MRSA, which is a particularly dangerous form of staph. It scares not only the patients, but the infectious disease specialists who worry about it getting loose in the wider population.

For those of you who don't like big scientific sounding words, skip this paragraph. There is an acronym called Eskape that describes a collection of bacteria that are fairly common and of concern. This group includes one that everybody has heard of, E. coli, and also includes Pseudomonas, Klebsiella, and one that is less known to the public called Acinetobacter.

As Bruhn explained, Acinetobacter is the poster child for a bacterial species that has rapidly gained resistance to multiple antibiotics. It's the kind of bug that can be transferred in the hospital setting through a needle or a breathing tube, and in those patients where the infection is resistant to most or all antibiotics, the mortality is high. A scary thought indeed. Luckily, most of us won't get it, but for those who do, the risk is substantial.

Well, why not just invent new kinds of antibiotics? After all, penicillin was followed by several other classes of antibiotics. There are tetracyclins and cephalosporins, to name a couple of the better known types. The problem is that bacteria have been very effective in developing the ability to survive antibiotic attack. They do this in various ways that are hard to combat. Bacteria have the advantage of being small and reproducing themselves very fast. One common form of bacteria can reproduce itself a thousand times in a little more than 3 hours, and be a million times more numerous after 6 hours. With numbers like this, the next round of divisions will yield lots of mutant bacteria (because DNA replication is not always completely accurate -- some changes occur), and some of those may be antibiotic resistant. That's the problem with rapidly growing colonies of bacteria. They are constantly throwing off changed versions of themselves, and it only takes one resistant bacterium to defeat an antibiotic.

Our speaker used this well known aspect of biology to point out one more difficulty for the clinician and future patients. When you think about the process of developing a new drug, including taking it through the required sequence of human trials, it is disconcerting to consider that a brand new, billion dollar drug may be rendered useless within 10 years due to the development of resistant organisms, and as we all know, patent protection exists for a limited number of years. In other words, on top of all the other problems, it turns out that antibiotic development is not economically promising to pharmaceutical companies. The topic of reforming patent protection is another topic for another day, but it is a real issue.

But that's just money and biology. The other problem in antibiotic development is a little more worrisome. Most antibiotics have been discovered in the natural world. Penicillin's origin as a mold is well known. Other classes of antibiotics have been created synthetically. The reason that one class of antibiotics differs from another class is that there are different mechanisms of action. Putting it more simply, some antibiotics act by shutting down bacterial protein synthesis. Others work on bacterial DNA. And others, such as penicillin, make it difficult for the bacterium to construct its protective outer wall.

The problem is that we haven't been really lucky in finding whole new kinds of antibiotics for quite a while now. We've been sorting through nature's inventions, and just like trying to find new oil fields after all the obvious ones have been found, we are having a hard time finding new antibiotics because we have been so successful in finding the older ones. It's the cliche of low hanging fruit, in this case the fact that we've already picked it.

Luckily, there are scientists and physicians working on a few novel approaches to finding ways to defeat human infection. I won't go into the detailed biochemistry (which is of course fascinating), but try to describe a little of the bigger picture.

One possible approach is to starve the bacteria into submission. Starve them of what, you might ask. One possibility is iron. We all need iron, and the bugs need it too. It's an essential nutrient. Bacteria don't have blood, like we do, but they use iron in generating energy. If you can keep bacteria from absorbing iron, and you can do so without killing the patient, then there is therapeutic potential. Some of the people at LA Biomed have been working on ways to interfere with the ability of bacteria to take up iron without doing damage to ourselves.

Another approach is to tinker with the patient's immune system in a way that accentuates the damage to the bugs while keeping us alive. This is fairly technical and complex, but it looks to be promising. If I may be allowed to editorialize a bit here, the level of understanding of biology that allows us to attempt a wonder such as this is fairly new. All the work on protein structure and function was essentially unknown fifty years ago. We weren't much further along even forty years ago. It's been a long haul to where we have information on most of the proteins in the animal world and many of the proteins in the microbial world. Out of that knowledge, we can tailor small synthetic molecules or we can select for the chemicals of the immune system itself to be our tools.

Bruhn spoke about one novel approach to treating the Acinetobacter infections that refuse to yield to antibiotics. It's called immunomodulation, and is essentially what it sounds like. It turns out that in some Acinetobacter infections, the body's own inflammatory response can be a problem. If you can tamp down one part of the immune system in a very specific way, you can potentially save the life of the patient. So far, the experimental results from studies in mice are promising, but lots of work remains to be done. In the mouse studies, at least in some experiments, the bacteria continue to survive in the presence of the immunomodulation, but the mice survive. If this approach turns out to be valid, then the obvious next step is to develop the drugs that will do the required immunomodulation in the safest but most effective way.

There is one other approach that is something of a return to the past, but dressed up in modern technology. Before there were effective antibiotics, one treatment for pneumonia involved giving the patient an antiserum aimed at the pneumonia bacteria. The serum was obtained by injecting the bacteria into an animal and collecting blood. The serum fraction could then be provided to a pneumonia patient. It was not a perfect therapy, but it was effective in reducing mortality.

So why not apply the monoclonal antibody approach to fighting infectious disease? This is a complicated question, so suffice it to say that for Acinetobacter infection, researchers are contemplating the use of a monoclonal antibody to attack a particular part of the bacterial cell. You might think of it as using modern science to improve the function of our own immune system.

In the real world, increasing levels of antibiotic resistant organisms have become a serious issue. But in the work of the research labs, we can find hope.

(Bob Gelfand writes about culture and politics for City Watch. He can be reached at [email protected])