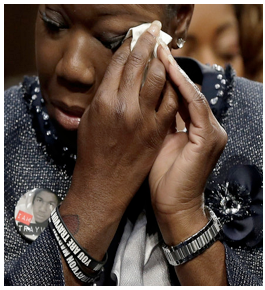 OTHER WORDS-My 15-year-old son is a hulking 6’6″. He wears a hoodie and listens to hip hop.

But I’ve never had to explain to him that his neighbors might find him threatening. I’ve never told him that police officers might assume that if he’s hanging out on the sidewalks of our city he’s up to no good. I haven’t warned him that clerks will follow him in stores, and I haven’t instructed him on how to behave when that happens.

In short, I don’t worry about him.

Because my son is white.

That one fact alone ensures that most people assume my son is what he is: a nice kid, an athlete who does well in school, and a young man with a bright future.

It makes my experience as the mother of a teenage son dramatically different from that of the black mothers I know. As the mothers of white boys, we take for granted that our sons will move easily through the world. We don’t know the daily sigh of relief black mothers breathe when their sons return safely home.

This month marks the second anniversary of the death of Trayvon Martin at the hands of George Zimmerman. The FBI doesn’t track the numbers so I couldn’t figure out how many young African-American men have been killed at the hands of police, guards, and self-appointed vigilantes since that date.

But one study found that in 2012 alone, there were 313 of these “extrajudicial” killings of black people. At least 136 of them were unarmed.

“Only 13 percent of those who were killed,” the study’s executive summary states, “were involved in allegedly violent criminal activity that physically threatened others’ lives.” Police involved in the shootings reported, instead, feeling threatened by those they killed.

And that was the only argument that prosecutors needed, much too frequently, to not bring charges against the killers.

My heart aches at the brutal thought of my son being gunned down. And yet, I can’t imagine myself in her shoes, as much as I try. I can’t imagine someone finding my sweet son threatening.

I can’t fathom some of my fellow citizens making a joke of my son’s death or making a “celebrity” of his killer. It’s unthinkable.

And that, right there, is a privilege.

So, while I can’t ever truly know Sybrina Fulton’s heartache or the anxiety of black mothers everywhere for their sons, I can stand side by side with them. I can treasure all the young men I am lucky to know — of whatever color—– treasure them as I do my own child. And I can heed the devastatingly powerful words Sybrina Fulton spoke at a National Urban League Conference last July: “Please use my broken heart to say to yourself, ‘We cannot let this happen to anyone else’s child.’”

(Sarah Browning is executive director of Split This Rock Poetry Festival and an associate fellow at the Institute for Policy Studies. This column was provided CityWatch by OtherWords.org)