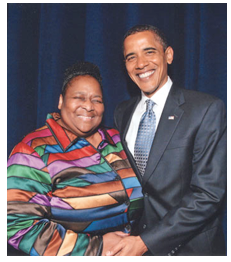 EDUCATION POLITICS-Veteran LAUSD Crenshaw High School teacher teacher Iris Stevenson has been cooling her heals in teacher jail at LAUSD for the crime of having taken her students to an event out of state without having signed LAUSD permission slips. Although she had parent permission and the prestigious trips she has taken her students on in the past have always been approved, this time she has been put in "teachers' jail" since December 2013, because she failed to get pro forma permission.

This is a completely unjustified use of incarcerating a teacher, since housing teachers should only be used when the teacher represents a threat to student safety and this form of isolation is necessary to allow a timely investigation to take place to determine if in fact the teacher threatens student safety as per the California Education Code. This was not the case with Ms. Stevenson nor is it the case with the vast majority of teachers who are being "housed" around LAUSD for the sole purpose of intimidating them into retirement.

Why? Because teachers at the top of the salary scale and/or about to vest in lifetime health benefits (which will cost LAUSD an additional $300,000 in presently unfunded liability) and/or disabled teachers are far more expensive than an uncredentialed Teacher for America-type teacher who they can get away with paying $35,000.

In just the first year you force a veteran teacher into retirement, LAUSD would have a combined savings of $45,000 in salary and $15,000 in significantly diminished benefits. And that's just the first year, since the novice replacement will not attain the seniority and pay of the veteran for many years to come. And of course, LAUSD can "encourage" even these new teachers to move on after 2 or 3 years to preclude them from attaining tenure and a higher salary and benefits.

What makes this possible is a completely co-opted media, like what showed up at Crenshaw High School on Friday, February 7th to supposedly cover a demonstration about teacher Iris Stevenson's being unjustly housed in the "rubber room" without ever being told what the charges were against her and how long it would take to resolve them.

Unlike the thousands of teachers that have preceded Ms. Stevenson, she at least had the backing of the Black community and groups like CORE and its head Celes King IV. Regular teachers who have been targeted in the past have never been able to get any interest from either the mainstream or public media, which up until now has functioned more like a stenographer for LAUSD party line than anything even remotely representing an objective journalist in a society with a supposedly free media.

In watching the event unfold, the media- true to form and now mundane habit- only did a cursory covering of the event. And although there were people who attend- myself included- that could have given a real context to what was going on, instead all media packaged a rather banal and offensive "news spot" that stereotypically was built around a bunch of Black folks singing gospel.

Now, don't get me wrong, I like gospel, but I find smart and aware Black people that are sick and tired of their community and young people being marginalized in an LAUSD long dysfunctional system that literally has no expectation that Black children can learn to be a far more pressing issue. Putting 33 different administrators through Crenshaw High in the last couple of years is not a way of achieving excellence. And no rational person truly concerned with finally allowing children of color to live up to their potential would ever think it was.

And then of course there was United Teacher Los Angeles (UTLA) President Warren Fletcher and UTLA Secretary David Lyle who complained to the cameras that, "LAUSD refused to communicate about Iris Stevenson,...or any other targeted teacher in the 'rubber room' except by press conference." So doesn't UTLA as the exclusive bargaining agent for all LAUSD teachers have the power and legal standing both under the Collective Bargaining Agreement and state and federal law to compel LAUSD to respond to them in an appropriate court of law, if  LAUSD continues to refuse?

Fletcher & Co. have done nothing over the last 3 years to vindicate these rights and obligations they owe to teacher rank and file. Rather, UTLA leadership- both elected and entrenched bureaucratic- continue to abdicate their responsibility by doing absolutely nothing to help targeted teachers. Worse yet, they complain that they don't have the money to do so, which is offensive considering that they have stood by and watched 17,000 teachers being unjustly targeted and forced into early retirement.

One must wonder just how much litigation these teachers' dues would have paid for. From LAUSD's point of view, is there any wonder why they continue the teacher witch hunt, since they are never confronted by any union action?

One unexplored scenario as to why teacher Iris Stevenson was targeted remained unaddressed by either the media or others present at Crenshaw High School on Friday, because it is hard to believe LAUSD administration could be so base and ignorant in their actions.

The most obvious yet unbelievable answer as to why Ms. Stevenson was targeted was that with 30 years experience, she is at the top of the salary scale, which has already put talks on thousands of high seniority teachers from coast to coast. And the District could save a whole lot of money by getting rid of her, irrespective of any positive effect she has on her students at Crenshaw or the community at large by meeting President Obama and taking her students to sing at Nelson Mandela's funeral.

Can people be so stupid? That's for you to answer.

● Note: If you or someone you know has been targeted and are in the process of being dismissed and need legal defense, get in touch: Lenny@perdaily.com

(Leonard Isenberg is a second generation teacher at LAUSD. He blogs at perdaily.com  … where these comments were first posted.)