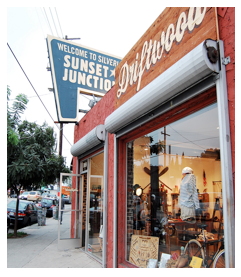 We even saw just how ridiculous these bodies can become last week, when the Silver Lake Neighborhood Council, curtseying to concerns of a couple of sniffling old cholas in mainstream media, decided that they would no longer consider themselves Eastsiders anymore.

Worse, the Department that shepherds these various scattered pens of alternately whining or bleating bovines, EmpowerLA, is run by amateurs with little regard for America's legacy of constitutional government.  It has the wackiest City commission of all, which is saying a great deal.

The department itself, hardly fostering stand-alone, "independent" Neighborhood Councils, mostly serves as the City's Kinkos service center, xeroxing, collating, and distributing in the obliging service of our Mayor, our Councilmembers, and the developers who own them.

At the Citywide level, Neighborhood Council elections are more like a "snap election" in which the people who hold power decide to call elections a little earlier than they are expected. There isn't a lot of run-up time, and this election cycle has been truncated.

In parliamentary countries, snap elections sometime happen when a party in power that gets to call for elections (something we've never had in the US at the national level) tries to consolidate its power to clear some coming political hurdle. The United Kingdom has had "called elections" for decades, creating the capacity for "snap elections," but only recently (2011) abandoned the practice and shifted to "fixed-term" elections.

One of the top reasons the City called for Neighborhood Council elections (even while making up rules for it as it went along), and likely the very top reason, is that Eric Garcetti has seen in his own Council District how much Neighborhood Councils can help him manage his own agenda. The Silver Lake Neighborhood Council is the most gamed one in the whole system. On Silver Lake, there are people who have prominent Council staff positions, their wives too, and we have also had land use attorneys, even people who write arguments on your City election ballots.

As a consequence, we see things that City Council doesn't quite have the temerity to discuss openly floated in the Silver Lake NC--one example was a discussion about AirBNB. Of course, if City Council itself started to talk about banning AirBNB or similar services, there would be a huge fight. But using a Neighborhood Council as a place to float that trial balloon and watching what kind of dialog in media ensued enabled the Council to discover whether the time was right or not to take some kind of action.

The Silver Lake Neighborhood Council of course also helped Garcetti kill the Sunset Junction Street Fair after a 30-year run. The bottom line on that was that the City didn't like the promoter, plain and simple. Now, who has ever liked rock promoters? But part of the attack on the Street Fair was accomplished by lining up the merchants affected the weekend of the Festival, and the Neighborhood Council did that.

Eric Garcetti wants Council and of course his own office to be able to work with a set cast for the next two years. His Mayoralty, despite appearances, is somewhat fragile, and all the political consultants know it. The people who advise him feel he needs every local support mechanism he can get supporting him, and NCs are one of those mechanisms.

The thing about snap elections is that they can really go badly. Those in "power" themselves may be caught off guard by the suddenness. These elections on the fly at this time are actually quite a gamble for the Mayor's office.

It all should be called to an abrupt end. But it doesn't seem possible that this might happen.

Neighborhood Councils have their own self-perpetuating advocacy groups via the various vanity congresses their least-talented and lowest esteemed have formed.

Also, even if after a decade, a Neighborhood Council election cycle barely accounts for a shockingly abysmal one percent of the voters of the City, that figure alone also represents five percent of a similarly abysmal "real" election turnout.

So I too have done my part to rectify all this civic nonsense, providing to CityWatch a column that is a primer on how the City of Los Angeles really works, for use of Neighborhood Council candidates and voters alike.