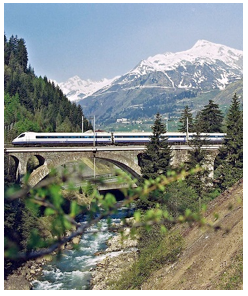 CALIFORNIA-Here’s a story of two high speed rail systems: Switzerland’s effort to build a 34-mile long tunnel right through the Alps to accommodate its planned high speed trains, at a cost of $10 billion over 20 years, and California’s joke of a high speed system now pegged at $68 billion with no beginning and no end in sight.  Why does high speed rail work in Switzerland and throughout Europe and is such a flop in America?

Two words provide the answer: “practical” and “integrated”.  Europeans use trains because they have to and they want them fast; thus the boom in high speed rail that dates to the 1970s.  European cities were laid out centuries before the automobile; their downtowns consist of narrow winding streets, with pedestrian zones and little parking, yet that’s where economic activity and the best shopping is.

Thus it became practical for Europeans to get downtown other than by car, and over time they have developed a highly integrated system, with buses, trams and underground trains all interconnected.  In many countries you can buy a combo train and bus ticket to take you exactly where you want to go.

Outside major train stations is a large bus plaza with 10 to 20 bus lines. And trains go directly to the airport; many airports have their own train station.  So high speed rail fits into an existing well integrated bus and rail system.

In Switzerland you can take the Swiss PostBus from virtually any tiny Alpine village to a nearby railroad station, and with only one or two train changes, arrive at the Zurich Airport rail station where you can easily board a flight to America.  I know; I’ve done it.

This explain why Swiss citizens voted in 1994 to tax themselves $10 billion to build a gigantic project, known as the Gotthard Base Tunnel, that will by the world’s longest railroad tunnel when it opens in 2016.  The Swiss story shows why high speed rail makes so much sense in Europe.

Italy, to the south, has a sophisticated high speed rail system that connects major Italian cities from Milan.  Zurich, to the north, is connected to high speed rail in France, Germany and Austria.  But the two cities are not connected except by much slower rails that must wind their way up into the Alps to pass through an existing 11-mile long rail tunnel that was built in 1882.

For cars and truck it’s the same, they must pass through the 11-mile long Gotthard Road Tunnel, where trucks often have to wait as long as 12 hours to pass and automobile drivers are told over their radios in four languages to go slow.  A car or truck crash inside this tunnel is a real mess, as happened in 2001 when two trucks crashed.

But most importantly, it will be one more piece of a massive rail system that now connects virtually all of Europe.  Go to any major train station and there are literally dozens of trains waiting to depart with connections to every part of the continent.  Hundreds of thousands of people daily pass through the major train stations.

We have none of this, we have a few commuter routes and that is about it.  For California, a high speed train would not improve on existing airports.  Given that California’s high speed train will be slow speed in the Bay Area, it will not beat the SFO-LAX flying time, even getting to the downtown.  If you want to stop in Fresno, will there be a fleet of buses at the train station to take you everywhere, not likely.  What if you want to go to Sacramento; is there a rail link up the San Joaquin Valley?  No.

People take trains in Europe because there are a lot of them; they get you where you want to go quickly and efficiently.  California high speed system will be a single line not even well integrated to our highway system.  If you arrive at the Los Angeles high speed station and you want to go to Santa Monica, how will you get there?  By car of course.  L.A’s Metrolink carries about 40,000 people a day of the 15 million in Southern California; it provides relatively small feeder services, as does the Bay Area’s BART system.  The Europeans solved the feeder traffic systems decades ago; we have just cars and limited light rail systems to take us to the vast suburban world that is California.

Getting Californians out of their cars has been the dream of environmentalists for decades and it has not worked.  Perhaps the most important transportation bill Gov. Brown signed last year was driver’s licenses for illegal immigrants; this means that the million or so undocumented workers in California can now legally drive to a job.  No one said let’s give them train tickets to get these folks to their jobs; everyone knows we drive to work in California and that is how it is going to stay.

Legislative Democrats and Gov. Brown should admit that high speed rail may be a nice idea, but without an integrated public transit system and without providing a faster way to get people where they want to go, it is just a wasteful boondoggle.

(Tony Quinn is a political commentator and former legislative staffer. This column was first posted at foxandhoundsdaily.com) –cw