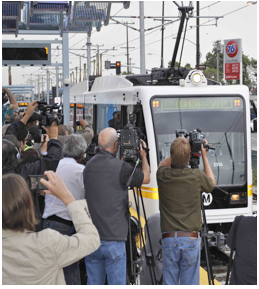 TRANSPORTATION LA-I've no doubt that this column will be seen as either hopelessly naïve or hopelessly cynical by many a reader, but it's hard to escape the factual conclusion that LA Metro (or the "MTA" if you wish to call it that) is making progress on improving transportation despite a plethora of complicated obstacles and challenges--a "hot mess", if you will.

The problem is clear for most who have studied transportation challenges in LA County for years--we're over 50 years behind in building, and one of the few good things about our current construction boom is that (during this economic downturn) the costs of materials and labor are completely opposite to how expensive things were a decade ago.

Measure R was a great start in achieving both financial support and countywide voter/political consensus for our overdue road and rail projects, but it's clear that the feds and Sacramento have been derelict in their obligations to our transportation, water and other necessary infrastructure.

LA County has had to save itself, and may have to do so again with future taxes and/or bonds.

What are the obstacles and challenges?  Well, there are too many to enumerate in one CityWatch article, but here are some of the most obvious ones:

1) Distraction because of the California High-Speed Rail (CAHSR) Initiative

To some, one rail project is the same as another rail project...even if they do recognize that the I-405 freeway is a very different freeway than the I-15 freeway.  The lack of funding and the legal challenges facing the CAHSR project might be solved by use of cap-and-trade funds, but this is still a very different project than that approved by the voters, as George Skelton of the L.A. Times points out).

Furthermore, if one were to weigh the priority of the CAHSR project to more local projects in the Sacramento/Bay Area and the Greater Los Angeles/San Diego Area, it wouldn't be difficult to conclude that the money going to the CAHSR project threatens and/or delays more popular and rapidly-buildable projects with greater and more certain economic and environmental benefits.

2) Distraction because of LA City shenanigans with developers

While this unwholesome playing of footsie isn't limited to LA, the greater responsiveness of the Santa Monica City Council to those residents/constituents concerned and/or opposed to the Hines/Papermate project is in marked contrast to the manner in which LA residents/constituents are treated when they oppose an ill-advised (and arguably illegal) project.

It's clear that developers want to take advantage of transportation measures, but the era of these developers paying for their fair share of transportation funding has morphed into an era where the voters pay for the ability of developers to make money...sort of a golden opportunity of paying big bucks for the privilege of being punched in the face.

If LA City residents are going to pay for improved transportation options, then they deserve to know that their neighborhoods aren't going to be destroyed to benefit a few well-connected special interests...especially because they're being asked to pay for TWO funding initiatives, one for an expansion of Measure R at the county level, and one to repair roads at the City level.

Lost in the mix of complaints about the safety and operations of the Metro Blue Line is that it's one of the most successful light rails in the United States, transporting approximately 90,000 riders a day. Operations from Long Beach to Los Angeles are now highlighted with the completion of the connecting Expo Line to Culver City, but the Blue Line is decades old and in need of repair.

Fortunately, the Blue Line will be upgraded, and with over 100 new and renovated train cars to help bring the Metro fleet to 21st century levels.  The power lines and station infrastructure will also be brought to modern-day standards.

4) A lack of funding from Washington

It's great that the recent appropriation bill from the feds includes $65 million each for both the Purple Line Subway to La Cienega (phase one of three needed to get to the I-405 western terminus) and the Downtown Light Rail Connector (connecting all four Downtown-oriented light rail lines to Bunker Hill, City Hall and other key Downtown locations).

However, it's just a start .  Future grants and loans are anything but certain from a Congress that (on both sides of the political spectrum) treats transportation as an afterthought, rather than the first priority, when it comes to federal budgets.

5) A lack of consensus from Metro on critical projects

It's no secret that connecting Metro Rail to LAX is a source of frustration and aggravation to voters and taxpayers throughout the county, but it's not so well-known that the complexities and challenges and misconceptions about what this means fly below the radar screen of most doing the belly-aching.  In particular, the term "Metro Rail to LAX" means very different things to different people.

For example, Yaroslavsky and others on the Metro Board recognize that having the planned train to LAX is one that is too expensive and difficult if it goes underground, yet Knabe and Ridley-Thomas and others recognize that it's too soon to exclude all possible options.

What IS certain, and DOES have consensus, is that $1 billion or more is needed for this project, and that it's not because of poor Planning or spending practices.  There are a lot of east-west, north-south and operational issues about a "train to LAX", with a lot of moving parts from LA World Airports, Metro, the LADOT and the Federal Aviation Administration.

There is an east-west People Mover, a north-south Crenshaw/LAX Line to connect the Expo and Green Lines that is 1.5 miles east of LAX, and a host of surface street and bus-related issues to resolve...to say nothing of a proposed consolidated Rental Car Facility at Century/Aviation.

Arguably, this project will eclipse the Wilshire Subway as the key item to promote future county, state and federal funding for LA rail projects--and, unfortunately, the Downtown Light Rail Connector does not get the attention it deserves as a critical countywide attention-grabbing item as does the Metro Rail to LAX project.

We also need Metro Rail and Metrolink extensions to the Westside, South Bay, Southeast Cities, and San Gabriel/Fernando Valleys as much as we need it to Downtown and LAX, to boot.

But at least it does appear that an initial countywide rail network is possible by/near the year 2020.

This is an item that will get unbelievably short shrift, but merits a great deal more attention, as the shortcomings of train-related transportation becomes more evident as we finally get many of the wishes we've wanted for decades with respect to rail.

Road and freeway upgrades and repair, sidewalk repair, bus- and bicycle-related transportation needs and the overarching issues of Planning and Land Use remain either neglected or ignored by elected officials and the electorate alike.  We each have our own agendas, and most of us are just too darned busy making a living and raising our families to have the time and patience for this sort of "nerd talk".

Yet credit is due as much as is criticism when credit is merited, and for those willing to stop the screaming long enough to realize how much progress is being made under less than ideal circumstances, it does appear that Metro is making progress...despite the missteps and distractions and unforeseen obstacles that keep getting thrown at it.

(Ken Alpern is a Westside Village Zone Director and Boardmember of the Mar Vista Community Council (MVCC), previously co-chaired its Planning and Outreach Committees, and currently is Co-Chair of its MVCC Transportation/Infrastructure Committee.  He is co-chair of the CD11 Transportation Advisory Committee and chairs the nonprofit Transit Coalition, and can be reached at Alpern@MarVista.org This email address is being protected from spambots. You need JavaScript enabled to view it. .  He also co-chairs the grassroots Friends of the Green Line at www.fogl.us .  The views expressed in this article are solely those of Mr. Alpern.)