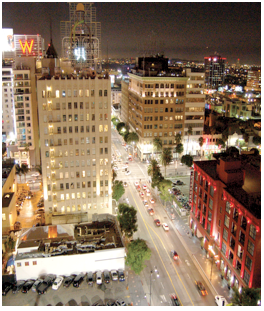 PLANNING LA-While some people have sought refuge in reciting the 23rd Psalm while walking through Hollywood’s hills and valleys, Judge Allan Goodman has taken affirmative steps to set us upon a wiser and safer path.

In his January 15 Final Statement of Decision, His Honor did more than declare that the City’ Hollywood Community Plan Update was “fatally flawed” and based on “wishful thinking.”  His decision compels the City to do a new Draft Environmental Impact Report and to include a DownSizing-DownZoning Alternative [DS-DZ Alternative].  This DS-DZ Alternative can save Hollywood from the evil decree of the City to smash us up with more super high density projects, atrocious traffic nightmares, and ever increasing levels of crime.  As the City’s own proposal for the Promise Zone funds stated, “Hollywood is riddled with crime.”

State law requires the City to lay forth before the public different visions of a future Hollywood.  The City may not only show a future Hill Valley of Biff’s Casino, but it has to show a future where the clock tower is restored and Hill Valley remains a family community.  And, where the Biff Tannen’s of the world are not in control.

Now LA City Hall has to prepare an alternative future showing what Hollywood would be like if it had less people (like we have a choice; they’re leaving in droves).  The City has to show how we can implement Hollywood’s Specific Plan for a proliferation of small neighborhood parks and something called woonerfs.  Basically, a woonerf is where a street lined with these low rise apartments from the 1950's and 1960's removes the pavement and replace it with grass creating a green pasture between the apartment houses and then the City adds back a curving road way.

Sure, a garden type woonerf is almost impossible to visualize; that’s the reason the City has a legal duty to provide drawings so that people can see what they could have other than another mixed-use project.

The law allows the Ds-Dz Alternative to describe a Hollywood with no Transient Oriented District [TODs] and with no Millennium Projects.  As Judge Goodman noted about the TODs, SaveHywd & HELP presented evidence that the TODs are the problem.  The public has the right to see a  vision of a liveable Hollywood.

The fact that TODs drive away people to less dense areas is well known to everyone except to politicians at City Hall.  As Joel Kotkin wrote in CityWatchLA on January 14.

“At the same time, the mayor and other regional leaders should realize that LA's revival depends on retaining the very attributes – trees, low-rise density, sunshine, as well as entrepreneurial opportunity – that long have attracted people. People generally do not migrate to Los Angeles to live as they would in New York or Chicago. Indeed, Illinois' Cook County (Chicago) and three New York City boroughs – Manhattan, Queens and Brooklyn – are among the few areas from which LA County is gaining population. Where are Angelinos headed? To relatively lower-density places, such as Riverside-San Bernardino, Phoenix and Houston.”

After Judge Goodman looked at the facts and after he looked at the law, His Honor found that the City had used bogus numbers and had abused its discretion by not being forthright with the public about Hollywood’s future.  Now, the City has to do follow the law, or find itself back in court with another fatally flawed Hollywood Plan.

(Richard Lee Abrams is a Hollywood activist and an attorney. He can be reached at: [email protected] ) –cw