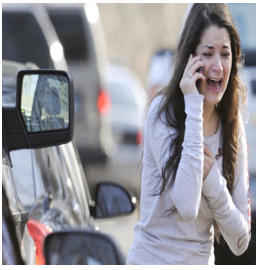 NEIGHBORHOODS LA-Usually after writing a “downer article” I like to write something upbeat lest I depress all of you as well as myself.  The CityWatch adult bullying article from last week really caused a furor.  About 80% of the responses were positive in addressing the situation and the rest thought I was either over reacting or had an overactive imagination.  There will be follow- up and I’m not going to let it go.

In this column however, I want to address school shootings and what some of our Neighborhood Councils and their Public Safety Coalition is doing to try and prepare our schools and kids so that they can survive one of these horrific attacks.

It seems like they are more frequent and more deadly but I discovered that according to Wikapedia, the earliest known United States shooting to happen on school property was the Pontiac's Rebellion school massacre on July 26, 1764. Four Lenape American Indians entered the schoolhouse near present-day Greencastle, Pennsylvania, shot and killed schoolmaster Enoch Brown, and killed nine or ten children (reports vary). Only three children survived.

The issue of students carrying guns to school was a topic of discussion dating to the mid-1870s, as noted in this 1874 Los Angeles Herald article:

"Boys and Pistols Yesterday at noon a boy sixteen years of age shot himself, or was shot by his brother. It matters not who fired the fatal shot. No criminal act was intended or committed, and the boy is dead. He was a member of the High School of this city and was, we are told, something over the average good boy of Los Angeles. This boy lost his life through the too common habit among boys of carrying deadly weapons. We do not know that this habit can be broken. We do not know that schoolteachers have the right, or would exercise it if they had it, of searching the pockets of their pupils, but it seems almost a necessity that some such rule be enforced. The hills west of town are not safe for pedestrians after school hours. Nearly every school-boy carries a pistol, and the power of these pistols range from the harmless six-bit auction concern to the deadly Colt's six-shooter..."

For you younger readers…there was a time when Los Angeles had three major newspapers, the Los Angeles Herald Examiner, Los Angeles Mirror and the LA Times.  There were four but the Examiner and Herald merged.  The Mirror was LA’s answer to the NY Post.

Aside from the shooting at the at the Jewish Community Center in Northridge and the recent shooting at Santa Monica City College we have been fortunate.  The Homeland Security web site has an abundance of statistics on school shooters www.homelandsecurity.org.

After Colombine A program, called ALICE -- alert, lockdown, inform, counter, evacuate -- has been implemented in 300 schools since it was founded in the mid-2000s by former SWAT officer Greg Crane and his wife, a former school principal.

After the Columbine shooting in 1999, Crane said he realized the lockdown-only policies most schools have aren't enough to protect students if there is a shooter on the loose. By locking doors and hiding, students become easy targets, he said.

"You look at Columbine and every single child killed in the library that morning," Crane told reporters referring to the library in which 52 children and teachers hid for more than four minutes before the gunmen entered and shot 18 of them. "They were all sitting down. ... Why were they there five minutes when they had five minutes to do something else?"

The C in ALICE is for "counter," and that's often the most controversial step, but it's also a last resort, Crane said.  Different parts of the country have come up with their own programs.

Almost everyone reacted after the Sandy Hook Massacre, with the exception of the NRA who advocated for selling more guns. January 2013, on average there has been a school shooting every 11 days during the school year.  Active Shooter Action Program (ASAP) was established because of the Sandy Hook tragedy. The topic of active school shootings originated on the Education Committee of the Woodland Hills Warner Center Neighborhood Council, focusing on the prevention of similar tragedies in the community. 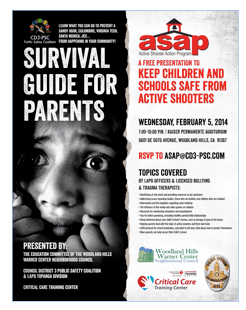 The committee began with three members, including a Senior Lead Officer from the LAPD. As time passed, and with more school shootings, the committee acquired additional members, and started to gain recognition. Because of the need to lobby for legislation and present to communities beyond Woodland Hills, ASAP was developed, merging with the CD3 Public Safety Coalition.

The CD3 Public Safety Coalition is comprised of the Neighborhood Councils in Councilman Bob Blumenfield’s District.  It started last year when the NC’s and some of the public safety organizations got together and organized a joint Public Safety and Disaster Preparedness Fair in October.  I have been a strong advocate for Districts and Alliances working together on joint projects.  Reseda NC and Tarzana NC were responsible for getting seven other NC’s in the West Valley to join together and present a Senior Symposium in conjunction with One Generation Senior Enrichment Center.  That has been an extremely successful project for the last five years.  The groups enjoyed working together and looked for other joint activities to host.

In the year since Sandy Hook, the ASAP committee has done extensive research about the necessary steps in preventing active school shootings. The committee met with law enforcement including LASPD, teachers, school principals, representatives from the LAUSD Board of Education, mental health professionals in the community, as well as from the Los Angeles County Department of Mental Health, and the LAFD Captain (Inspector) for the Schools and Churches Unit.

A full assessment was established about what services already existed in the community and what was missing. In addition, local school safety policies and procedures were evaluated, including lockdown procedures, teacher trainings and mental health assessments for high-risk youth. The committee also educated themselves regarding appropriate fire rated locks, peepholes and window coverings.

Furthermore, the LAFD Captain informed the committee that they had been the only entity to inquire about fire rated door hardware, although schools were taking their own initiative in putting in peepholes, door locks etc., which was problematic, since it probably did not comply with fire codes.

Another huge realization was that there was no legislation regarding mandatory lockdown drills or “Run, Hide and Fight” drills.         Earthquake and fire drills are mandated drills that are required to be performed regularly, yet children are not dying from earthquakes and school related fires. In fact, a child has not died from a school fire in the U.S. in over a half a century. Yet, children are dying and are critically injured from school shootings at epidemic rates.  Therefore, various legislation efforts for secondary alert systems, lockdown and “Run, Hide and Fight” drills etc. are vital.

After ASAP compiled all the research, guidelines were established that would educate the community to help prevent active shooter events at schools. Presentations geared toward parents, in addition to presentations for teachers and school staff regarding identifying at risk youth and reaching these kids in the early stages deemed critical.     Lobbying for necessary legislation was another imperative avenue for ASAP to tackle.

ASAP’s ultimate mission is to ensure that schools are prepared to protect children from these tragedies. Furthermore, ASAP has teamed up with LAPD’s “Seconds Count” program, from the Topanga Division, which educates school educators and staff to protect themselves against violence and active shootings on campus.

ASAP together with members of the LAPD Topanga Division will have their first Parent Presentation on February 5th at the Kaiser Auditorium, in Woodland Hills, from 7-10pm. Presenters include licensed therapists specializing in this field, along with two LAPD Officers. Mental health issues must be addressed and taught how to recognize these young people before a tragedy occurs.

If you would like to see a preview of the of the ASAP presentation, Tarzana Neighborhood Council is holding three Town Halls this week and although the featured topic is different at the Town Hall in St. Paul’s United Methodist Church, Temple Judea, and Islamic Center of Reseda (see www.tarzananc.org for more info) the election committee thought it was important enough to have this presentation at the three events.

You will note that I have not mentioned anyone by name.  They asked that I describe the group as opposed to giving credit to individuals.  These people are volunteers with a community agenda.

ASAP has a long road ahead.  They have to get LAUSD on Board…never an easy task. City, County and State legislators need to get behind the project and so do we.  There is no sitting back and waiting for all these things to happen or waiting till a tragedy occurs.  Neighborhood Councils and your Alliances what do you say?

(Denyse Selesnick is a Board member, Election Chair and Vice-Chairman of the Outreach Committee for the Tarzana Neighborhood Council.  She is a contributor to City Watch covering activities and policies of NCLand. You can reach her at denyseselesnick@yahoo.com)