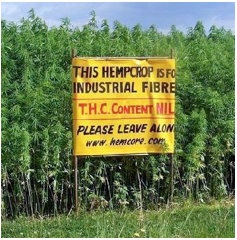 PLANET WATCH-The phony justification for banning hemp because someone might secretly grow pot makes even less sense than it did before Colorado and Washington State legalized marijuana.

Take a moment and look around you. Look up. The sky hasn’t fallen, has it? People in Colorado are buying marijuana — legally — and civilization hasn’t come crashing to its knees.

At this point, we’ve all seen TV journalists reporting from Colorado dispensaries, noting long lines around the block and shop owners worried their supplies can’t keep up with demand. It’s quite a spectacle, which will be repeated in Washington State later this year.

But the only thing new is that it’s happening out in the open because pot is now legal.

In the rest of the country, a hefty percentage of Americans are doing the same thing — just more clandestinely so they don’t get arrested for it. And unlike their counterparts in Colorado, they aren’t paying taxes for toking, and their pot purchases might give business to violent drug cartels.

I’m not in favor of Colorado’s legalization of marijuana because I smoke it (I don’t). But I’m sick of watching my tax dollars go to arresting and locking up potheads.

And our enforcement of the law is anything but fair. My pot-smoking friends — the computer science PhD at an elite university and the highly paid tax attorney — will never get busted for smoking bud.

That fate is reserved mostly for potheads of a different class — people like Ramarley Graham, an 18-year-old African American youth who was shot by a cop in the Bronx while attempting to hide a small bag of marijuana.

But just before Colorado redefined the phrase “Rocky Mountain High,” and with much less fanfare, California legalized growing industrial hemp.

Hemp, although related to marijuana, won’t get you high. Instead, it’s useful as fiber for clothing, rope, and paper, and its seed is edible as a healthy food or oil. Hempseed has the perfect ratio of omega-6 to omega-3 fatty acids, and it even contains a beneficial form of omega-3s, stearidonic acid, that is rarely found in plants. It can be turned into a biofuel.

Better yet, it’s ecologically friendly to grow. Hemp requires very little in the way of pesticides. By using hemp for paper, we can cut down fewer trees. It’s a much better option than cotton for clothing, since cotton requires heavy pesticide use — including some arsenicals that are banned for all other uses but allowed on cotton.

Unfortunately, like it’s much maligned cousin, hemp is illegal under U.S. law. Because, you know, what if someone grew a bunch of pot and hid it by pretending it was hemp.

Canada and China are somehow capable of allowing farmers to grow hemp without losing their grips on drug control.

Our insane ban on growing hemp has nothing to do with drugs. It’s about money. The industries that stand to lose business if hemp is legalized — the cotton, timber, and biofuel industries, to name a few — don’t want the competition.

Do we have a free market or not? We should legalize hemp and let the chips fall where they may. The industries that stand to lose if hemp is legalized have used drug hysteria to their advantage for long enough.

Now that marijuana is legal — at least in Colorado and Washington State — the phony justification for banning hemp because someone might secretly grow pot makes even less sense than it did before.

(Columnist Jill Richardson is the author of Recipe for America: Why Our Food System Is Broken and What We Can Do to Fix It. This column was provided CityWatch by OtherWords.org)  -cw