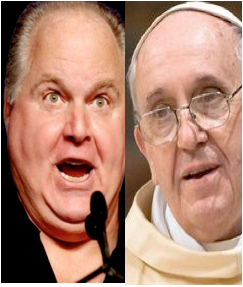 RED-BAITING POPE FRANCIS- Here’s a twist on Christmas that would make Jesus weep.

First, a right-wing faction in the United States is wringing its hands over a hokey cultural “crisis” cooked up by the faction itself, namely that liberals, atheists, humanists, and — God forbid — Marxists are waging a “War on Christmas.”

The infidels aren’t accused of lobbing bombs in this war, but words of mass destruction. Specifically, the right-wing purists wail that unholy lefties are perverting the season by saying “Happy Holidays,” instead of “Merry Christmas.”

Second, some ultra-conservative members of this same faction have launched their own war — against Jesus. How twisted is this? They say no one should mess with the word “Christmas,” yet they’re messing with the guy Christmas is supposed to be about.

OK, technically they’re not going directly at Jesus, but at a key part of his message — and, and in particular, at a key messenger of Christianity: Pope Francis.

They’ve decided that the Pope is a “Marxist,” pointing out that Francis speaks often about “the structural causes of poverty,” the “idolatry of money,” and the “new tyranny” of unfettered capitalism. Obviously, say the Pontiff’s pious critics, that’s commie talk.

The clincher for them was when Francis wrote an official Papal document in which he asked in outrage: “How can it be that it is not a news item when an elderly homeless person dies of exposure, but it is news when the stock market loses two points?” See, cried the carpers, that’s proof that Francis is the Red Pope.

But wait — that was a very good question he asked, one ripe with the moral wrath that Jesus himself frequently showed toward the callous rich and their “love of money.” Indeed, the Pope’s words ring with the deep ethics you find in Jesus’ Sermon on the Mount. Was he a commie, too?

Could it be that the carpers are the ones lacking in real Christmas spirit?

(Jim Hightower is a national radio commentator, writer, public speaker, and author of the book, Swim Against The Current: Even A Dead Fish Can Go With The Flow, Jim Hightower has spent three decades battling the Powers That Be on behalf of the Powers That Ought To Be - consumers, working families, environmentalists, small businesses, and just-plain-folks. This column was provided CityWatch by OtherWords.org)