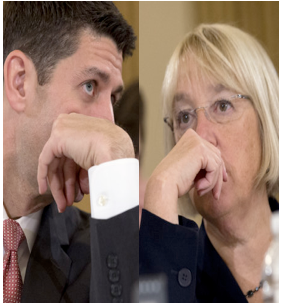 OTHER WORDS-Channeling the spirit of the holiday season, key lawmakers managed to set aside dysfunction and take the first step in a small budget deal for the 2014 fiscal year.

This was a necessary first step to passing a budget by Jan. 15, the expiration date they set for the stop-gap spending bill that’s currently funding the government.

While their agreement is an important step toward bipartisanship and away from manufactured crises, it leaves a lot of congressional business unfinished — including Unemployment Insurance, Food Stamps, and the debt ceiling. It also leaves a lot to be desired as it lacks most of the things that Americans say they want.

There’s broad agreement among the general public about what a budget deal should contain and as we move into the budget debates for fiscal year 2015, let’s hope that our lawmakers finally pay attention to what they missed in this deal.

National polls routinely indicate that Americans want Social Security strengthened, with 82 percent choosing to preserve benefits even if it means raising taxes. As lawmakers move forward, they should listen to the American people and eliminate the $113,700 taxable limit on wages subject to Social Security taxes to strengthen and secure the program for generations to come.

When it comes to the Pentagon, Americans favor cuts, with voters on average choosing an 18 percent reduction in military spending when they’re presented with information about current spending levels.

Yet each year the military accounts for more than half of all discretionary spending approved by Congress. It’s imperative that lawmakers heed the advice of a bipartisan task force that found $1 trillion in fat over the next 10 years hiding in the Pentagon budget — and start making intelligent reductions.

And these loopholes add up to big bucks —they cost the U.S. Treasury hundreds of billions of dollars each year. In 2013 alone, the tax break for offshore corporate profits, known as “deferral,” cost the U.S. Treasury $42 billion. That’s five times as much as the federal government spent on the early-childhood program Head Start over the course of this year.

The tax break for capital gains and dividends income — which overwhelmingly benefits the top 1 percent of taxpayers — cost the Treasury a whopping $83 billion in 2013. That’s more than the entire food stamp program, which both chambers of Congress appear poised to cut next year.

During closed-door Budget Committee negotiations we routinely heard from our lawmakers that the federal budget is “in crisis.” To use a phrase that Vice President Joe Biden made famous in last year’s vice presidential debates, that’s a bunch of a malarkey.

The federal budget’s crisis is being caused by our elected officials, who have failed to fulfill their responsibility of passing a spending and revenue plan that reflects the people’s values and priorities.

There’s plenty of common ground for what that plan should contain.

The Budget Committee legislation tweaked the edges of the federal budget instead of coming up with real solutions. Americans deserve better.

(Mattea Kramer is Research Director at National Priorities Project and the lead author of the book A People’s Guide to the Federal Budget. NationalPriorities.org  This column was provided CityWatch by OtherWords.org)