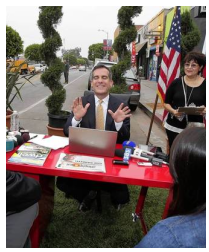 STREET TALK-In 2009, then New York Mayor Michael Bloomberg made one of the biggest changes Manhattan had ever seen. It had nothing to do with Big Gulps. Bloomberg and his transportation czar Janette Sadik-Khan took a congested section of Times Square and closed it to traffic. They erected barriers, painted the asphalt, added beach chairs and -- presto! -- the street became a park.

These and other instant plazas reduced injuries to pedestrians and motorists while they boosted retail receipts. Most importantly, they returned the public realm to the people.

Can the same magic happen in LA? For his first act as new mayor, Eric Garcetti unveiled the "Great Streets Initiative."

Of course, LA already has great streets. A few, anyway: Ventura Boulevard is teeming with energy. First Street in Boyle Heights is a real community gathering spot. Abbot Kinney Boulevard -- anti-gentrification protests -- has become a hipster haven. But greatness doesn't happen by accident: These places are like stages set with wide sidewalks, tamed traffic and authentic retail so that daily social dramas can happen.

Then there are the duds. Lincoln Boulevard from Marina del Rey to Santa Monica should be great. Instead it's a headache of auto-domination, cluttered signage and crummy landscaping. (My mother called it "Stinkin' Lincoln.")

"And while we're at it, let's add some sculptures and murals," Garcetti announced at an October transportation conference by the Urban Land Institute, Los Angeles.

"Their first priority will be to make sure street projects are coordinated. No more Bureau of Street Services paving a street on Monday, DWP digging it up on Tuesday," said Garcetti. "Let's also combine a DWP pipe project with some street furniture funds and with a sidewalk repair project all at the same time." Here's the video of his speech.

But this "first priority" is a no-brainer. It doesn't take an urban visionary to see that departments should work together.

What would really transform the landscape is a Times Square-like project. Something big and bold. The ideas are already floating out there... some of which Garcetti endorsed as a City Councilman from Hollywood. He could cover L.A.'s sub-surface freeways, such as the 101, and turn them into parks. He could join forces with L.A.'s uber-popular Cyclavia events and revive the dormant bike-share program, such as those successful in Chicago in New York.

And he could identify the streets at present designed only to flush traffic through town and instead give them a human dimension. These places constitute our meager public spaces. Let's cede more of them to walkers, to runners, to bikers, to skaters, to moms with strollers. To us.

When Bloomberg's transportation chief Janette Sadik-Khan did this, there was opposition, naturally. But, according to Esquire magazine's profile of "16 Geniuses Who Give Us Hope," she created plazas in at Madison, Herald and Union Square. "A whole long stretch of Broadway -- two hundred thousand square feet, the size of three and a half football fields -- is a pedestrian parkland, tables and flowers and sweating tourists resting their eighty-pound Toys 'R' Us bags while billboards glint commercially above them." In her inspiring TED talk, Sadik-Khan sums up these changes.

Her changes were a huge success. Maybe the best move Garcetti could make is to hire her.

(Jack Skelley is an urbanologist and marketing expert … and owner of JSPR. He blogs at HuffingtonPost.com [[hotlink]]] where this column was first posted. More on Skelley here.)