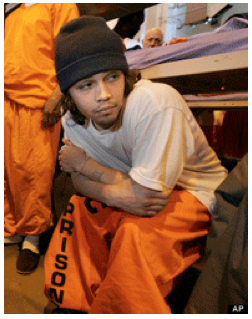 THE VIEW FROM HERE-I’ve talked about many social-justice issues—healthcare, immigration, segregation, even the harm perpetrated by people who are unwilling to serve on juries.  But I have never touched deeply enough on the current, pervasive disparities in the prison system that are inflicting both an immediate and a long-term perniciousness on all our lives.  If gone unchecked, these inequities can hit us all like an earthquake or tsunami--the consequences of mass incarceration.

It is said that you leave your sanity at the door once you become subject to the horrendous conditions inside!  Cramped quarters lead to greater violence (consider an earlier study with rats that killed each other because of over-crowding).  The law requires 3 hours a week outside the cell but that doesn’t mean outside in the fresh air of a prison yard.  It could be in a suffocating gym where sunlight only peeks through high windows.  Our jails and prisons are bursting at the seams with an ever-greater “nexus between race and the PIC.”   More are in for drug-related crimes than ever before.  Most spend 23 hours a day in a cramped County jail cell.

Solitary confinement, which can last for an interminable amount of time (think of Denzel Washington’s brilliant and prophetic performance as Rubin Carter in the movie Hurricane), frequently produces automatons.  We might as well go back to the Dark Ages and lobotomize the inmates.  I thought jail was about rehabilitation for eventual re-introduction into the community (post-prison) to reduce recidivism and mentor more productive citizens!

Too easily, we forget we are dealing with human beings--they are, after all!  We have more concern for mistreated dogs—too many going from sweet, cuddly fur balls to marauding neighborhood terrorists.  We forget that similar conditions can also create monsters before and upon their release.

Our contemporary prison system seems to reflect and perpetuate inequality.  Prison today, as Michelle Alexander says, is the “new Jim Crow,” the eponymous name of her book.  Eisenhower spoke of the military-industrial complex.  Today we have the prison-industrial complex (PIC).

In LA County there are some 18,000 people in our jails at any one time—places that are sometimes no more than holding tanks, often for years, until the accused goes to trial (and keep in mind, they might have been innocent the entire time).  The vast majority of inmates are males in their mid-30s--48% Latinos, 32% Black and females--39% Latino and 34% Black.  Because most cannot make bail (often set at unreasonable, exorbitant rates beyond the reach of most people), they sit there for weeks, months, even years.

Few will ultimately go to trial because they have been “coerced” into plea bargaining:  Go on trial for a life sentence with an over-worked, understaffed Public Defender or accept a 36-year deal.  Out of fear or lack of counselling or just poor judgment, 92% opt for the plea.  What most need (before they become hardened criminals) is a drug-diversion program or mental health therapy rather than imprisonment.

Once inside, prisoners find that classes have been cut, so securing a GED or going for a higher level of education is a virtual impossibility.  Once out, an abundance of conflicting, mind-boggling rules confront them, all of which have the ultimate consequence of keeping them from getting a job so they have no legitimate means of supporting themselves or their families.

What happens when felons are finally released?  In many states these ex-cons face that New Jim Crow:  The formerly incarcerated become disenfranchised (their ability to vote is forever taken away, making them second-class citizens, people without a stake in their communities; people without a sense that I am an integral part of my neighborhood and must protect it).

Furthermore, they aren’t eligible for food assistance or Section 8 housing (and too frequently are prevented from moving back in with family or friends who are rent-subsidized because of  regulations that would cause such people to lose their own rent subsidies).  What a Catch-22!  In the meantime, advocates like Susan Burton (A New Way of Life) are working feverishly to overturn these obnoxious Section 8 provisions.

When we go back to the 50s and 60s during the Civil Rights Movement, the number of prisoners was down and the conditions were up.  However, since the struggles for rights were largely successful and the Viet Nam War had come to an end, the PIC needed to nourish the pig—the bank was nearly empty.  So through lobbying and campaign donations and a number of other factors, the War on Drugs began and continues … unabated.

There is money to be made by the PIC.  When publicly financed prisons have inadequate accommodations for their inmates, we have turned to privately owned systems (often placed in rural areas with a promise of jobs for the locals) to alleviate the overflow.  However, since most residents, in fact, don’t have the required skills, people from elsewhere are brought in to build and maintain and guard, and the local economy receives short-shrift.

Private prisons are paid per head.  They are owned and run by corporations, some of which can be found on the Stock Exchange.  These businesses lobby to criminalize minor acts that were never crimes before.  Thus, as more people are convicted of what are often victimless crimes or issues that previously would have been considered “harmless” misdemeanors, private prisons make more money—by the boatload.

There are 23 new prisons in California alone at an approximate cost of a quarter billion dollars each.  These places of incarceration have become profit mills for the plutocrats.  Prison work generates all kinds of products (not just license plates) from widgets to lingerie (Victoria’s Secret is just one benefactor of their labor).  What do prisoners get out of it?  They earn a few cents a day for pocket change to purchase toothpaste, a hair brush, or stationery to write home to tell Mom not to worry even as they get beaten up with such frequency, they have lost count.

For many however, being sentenced to a State prison is preferable to being housed in our LA County jails where conditions, by comparison, are so much more appalling.  Drugs and violence abound.  Since visitors are examined from head to toe and incoming mail is scrutinized, from where do you think the contraband comes?!  I’m just sayin’ …

The Twin Towers, in fact, are so notorious for their nightmarish conditions, that a two billion dollar plan to replace them is being seriously considered.  What ought to be an obvious, better option is education over incarceration.  It might just do the trick and save the taxpayers a lot of money at the same time.  Americans place 700 persons in jail out of every 100,000 in our general population.  This statistic is not one about which we should be proud or take pleasure.  Countries like Canada, England, France, Germany, Italy, China, and Japan don’t even come close.  In contrast, their average is between 60 and 130. We can do better if we want to do better—now that’s the American way!

The FBI and the ACLU have long been investigating the County jail crisis.  Sheriff Lee Baca and his department have been found guilty of egregious violations and not only must correct those deficiencies but must pay steep penalties as individuals and as a governmental agency as well.  If and when Baca decides to run for re-election, are you going to think twice about your vote?

The public has generally become inured to what is going on.  Their sensibilities have been numbed through the constant barrage of gruesome sights and sounds from the news media, TV shows, movies, and X-box videos.  The public has become scared.  Neighborhood Watch Programs proliferate (often producing the George Zimmermans of the world—someone, by the way, who genuinely needs help before another explosion occurs).

What has happened to us in America?  Over the last 30 years, our country has become number one in the world at having more people incarcerated at any one time (second only to what transpired during the reign of terror during Stalin’s regime).

The public feels little empathy or sympathy.  There are no demonstrations outside prisons or jails to call for amelioration of the situations found there.  Did the recent inmate hunger strike accomplish much of anything?  Where was the outcry?  We cry more over puppy mills than prison mills—though both are deserving of our tears.

We need to demand mitigations.  We cannot allow our police to protect and to serve the whiter, more affluent neighborhoods, making everyone there feel safe while they occupy the poor, minority areas, engendering distrust and constant apprehension by those residents.  The latter are places which abound with the constant sound of overhead helicopters, where hair-raising encounters with the police are too frequent, where officers themselves are often filled with dread at the thought of the next confrontation.

While LA County is the largest jailer in the world, it can change its reputation for the better.  It can become a role model to be emulated by other prison facilities.  Supervisors Mark Ridley-Thomas and Gloria Molina are working on this very concept.

It is important to note that there are many individuals, groups, and organizations that are seeking remedies to the quagmire our prison system finds itself in.  Split-sentencing seems to provide one outstanding option for those guilty of lesser crimes:  Inmates spend half their sentence in jail (where they can learn coping skills and get an education as well as job-training) and the other half under close outside supervision where they can successfully develop skills to engage the outside world.

Mental health and drug diversion programs have already been mentioned as viable alternatives to what we have now.  Furthermore, activists and other leaders are putting their heads together to come up with a variety of more acceptable and promising strategies.

The answer is certainly not “one method fits all.”  As long as we as a society are cognizant of the problems inherent in our current prison system and as long as we dedicate ourselves to replacing them with something far better, resolution to this very serious issue cannot be far behind.

We need to make our voices heard--loud and clear!  We must replace the New Jim Crow with a Pax Romana!