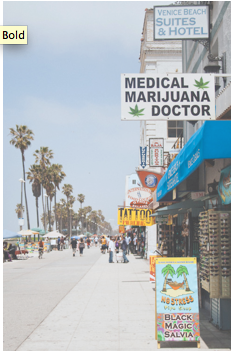 BEEN THERE, DONE THAT-Since I have multiple sclerosis and some other health issues, I am in constant pain. Sometimes it is so excruciating that it feels as if my body were on fire.  It is hard to sit and difficult to stand.

Being aware of the LA City Council ordinances regarding marijuana dispensaries, I decided to do some “research” on how one goes about getting a prescription for one of the hundreds of varieties of cannabis.

I was at my neurologist’s office for my bi-annual check-up and thought I would slip in the request for a prescription.  Although he replied that I would be a good candidate, he stated that he would not provide one as long as marijuana-use is a Federal offense.

My next step was to contact a reputable dispensary (I had worked with its staff on some previous political issues) to recommend a doctor who would write a prescription for me (still research, of course).

I called to make an appointment.  When I arrived, I had to fill out some basic informational paperwork which included a few generic questions about why I was at the office.  There was no long list of questions about my health issues or any medications that I was already taking or allergies I might have.  No blood pressure or temperature was taken nor were weight and height measured.  Family doctors and dentists and optometrists all ask such questions before treating their new patients.  Why shouldn’t marijuana doctors be mandated to do the same?

I did have to hand over my photo ID (driver’s license) to keep a copy for their records.  Then I was led into an inner office and was told, just before I entered, that I would be speaking to the doctor via Skype.  What the ... ?!  I sat down opposite a computer screen—an out-of-world experience.  It felt a little like 1984.  Big Brother watching.  The doctor appeared, looking Skypey—distorted—reminding me of the Wizard from Oz.

He asked me two or three questions, said I looked good for someone with MS ... .and that was it!  I left the room, paid $60, was given a letter for the marijuana pharmacy and a picture ID card (for $10), a document which would expedite getting a prescription filled (the card is good for one year).

My experience was frightening.  To think I could walk in and get a prescription for weed in less than 10 minutes is just plain scary.  What if I had a heart condition that could be exacerbated with drug use?  What if the ingredients in the drug would react negatively with my current medications?

The entire experience felt like being in an “prescription factory” where there was no genuine concern for the welfare of the patients—just an unsavory place to make easy money for a corporate doctor who owns numerous on-line offices and perhaps sees none of his “patients” in person.

Then I began to think about all the concerns the City Council and many constituents have expressed over the number and locations of marijuana pharmacies.  The final version of the ordinance limits marijuana dispensaries to 134 for the entire city, setting further limits as to how close they can be to schools, public parks, etc.

Why isn’t there even greater concern over which doctors are allowed to prescribe in the first place?  A medical license alone shouldn’t be enough to authorize the writing of such prescriptions.  Of course, there are many doctors who run their marijuana practices ethically, using good judgment, being diligent, looking out for the best interests of their patients.  Of course, those who need these prescriptions are grateful to the doctors who will write them.

On the other hand (and there is always another hand), legal marijuana pharmacies/dispensaries are necessary.  They fill a very real need.  I visited one on Ventura Boulevard in Encino and was very impressed by its quality.  It was not at all what I had expected.  I had pictured a head shop or something like that.  I thought my senses would be overwhelmed by the “bouquet,” but that was not the case either.  The atmosphere, in fact, was very professional.

A customer has to be buzzed in.  There are video surveillance cameras along with an armed security guard to make sure that nothing untoward occurs.  The customer is asked for the recommendation form, written out and signed by the prescribing doctor (a copy is made; the original goes back to the consumer).

A copy is also made of the patient’s California ID card/driver’s license (only resident Californians can obtain the marijuana medications which must be limited to use within this state and cannot be taken across state lines).

A questionnaire is filled out and signed by the patient who is then invited into another room (buzzed in with a security guard on duty).  Very knowledgeable staff assistant to the customer:  What is your health issue?  For what do you need the marijuana—back pain, sleeplessness, lack of appetite, etc.?  Which option do you prefer?  Chocolate bar, candy, beverage, pills (some of which do not make you high), joints (yippee!).  The prices are surprisingly reasonable:  $10, $20, $30—depending on what you want.  Cash, debit, credit card—any of which pay the bill.

Getting back to the concerns over marijuana doctors, there needs to be rules—greater oversight.  Patients should be examined in person and not long distance.  Patients need to be advised which form of medical marijuana is best for ameliorating their particular symptoms.  Physicians must include advisory directives to their patients in order to avoid abuse of the drug, such as driving under the influence.

We need to proscribe doctors from writing marijuana prescriptions unless they are willing to uphold their pledge to the Hippocratic Oath—DO NO HARM.  It must be up to us to press our elected City Councilmembers to pass an ordinance that will protect those patients who are truly in need of pain mitigation and to protect the rest of us from physicians who are willing to DO SOME HARM.

If proper administrative management over these practices means a slightly higher initial fee for people seeking these prescriptions, then maybe patients should be willing to make that little sacrifice for their own good.

On the other hand, the job of our electeds is to protect and to serve the greater community (just as it is for our police).  They must live up to our expectations and respond to the needs of the constituents—set the rules, make them practical, make them reasonable and fair, enforce them.

The public deserves something better than marijuana doctors.