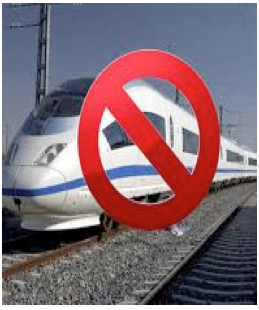 ALPERN AT LARGE-Quick--what does our prison system, California High-Speed Rail plans and a public works water measure have in common?

Answer:  Californians want them, but balk when they see the price tag, according to a USC Dornsife/LA Times poll.

Quick--how many folks in California credit our state's drop in crime to the "three strikes" and other tough law enforcements, and how many want more prisons?

Answer--about as many who are disgusted with the overpayment to prison guard unions and the cost overruns of exorbitant prison facilities, to say nothing of the cost of housing prisoners in this state.

Answer--the same percentage that approved the California High-Speed Rail Project to begin with: about 52%.

Quick--how many Californians believe that our water situation is either a crisis or a major problem?

Answer--a majority, as is the number who balk at the price tag.  Only one-third of all voters, according to the aforementioned poll, support more borrowing.

Quick--how many Californians believe "other Californians are paying their fair share" towards public works projects?

Answer--do I really have to ask?

Quick--how many Californians believe our public works projects are being spent well, and in a transparent, cost-effective manner?

Answer--again, do I really have to ask?

Quick--do we have faith in our utility providers, prison system operators and transportation authorities to prioritize spending and pursue the public works projects that Californians overwhelmingly favor?

Quick--is Governor Brown's push to keep prisoners in our system and out of the streets, and his effort to perform water-related public works projects, being hampered by his support of the California High-Speed Rail project?

Answer--that's a toughie, because each of these endeavors have different pros and cons, and perhaps have different sources of support and opposition.  But it's not too much of a stretch to suggest that Californians are truly feeling soaked and whipsawed by the constant sticker shock in a state still trying to keep its budget balanced...and the High-Speed Rail project is often "Exhibit A" as to a policy of poor spending in Sacramento.

Quick--Is there an answer towards spending money cost-effectively on public works projects?

Answer--yes, but perhaps this state does not have the ability to do that.  So long as the "we need good-paying jobs" folks double and even triple the labor costs for these projects (both for construction and operations), we'll never get these built on budget and on time.

But there IS an answer, and it's two-pronged and probably focused around more public sector union reform and the willingness of society to teach young people job skills, to allow those seeking forgiveness on their student loans, and to pursue ways to truly integrate illegal immigrants into California society.

Certainly the snapping turtles from the Left will screech out their knee-jerk arguments about slave labor, but asking public sector unions (such as the LADWP and prison guard unions) to be reasonable, affordable and sustainable in their pay and benefits is the same as asking the average taxpayer to have their taxes treated as fair investments and civic duty...and to not have that taxpayer treated as slave labor, to boot.

Certainly the snapping turtles from the Left will (again) screech out their knee-jerk arguments about slave labor, but separating middle-class and established private and public sector union jobs on one hand, from necessarily low-wage jobs that teach job skills, allow student loan forgiveness and allow civilian opportunities for illegal immigrants to pay their way into American society (currently they can only do so by joining the military) on the other hand, merits consideration more than ever.

We are way, WAY behind on our public works spending, and revisiting one of the few Depression-era successes of FDR--the Civilian Conservation Corps--gets little to no thought at a time we need it the most.

And although we clearly MUST pay a living wage (I really prefer "independent wage"), along with Medi-Cal benefits for workers and their families, in this modern day of civility and fairness, there are no shortage of sincere individuals--particularly young individuals--who want to support themselves and their families and get a new start.

Kids who blew it in school but want to learn job skills.  College and grad students who want to work off their loans while they're still young.  Illegal immigrants who want to prove they can work and be part of American society.  Low-risk inmates who want to show they want to live their lives anew with honest work and with an employment history.  Folks out of full-time work for years, and who want to have a solid resume.

Construction materials are cheaper than ever at this time, and our need for public works includes decades-overdue projects.  Now all Californians have to both look inwards and at what they're willing to spend for future generations.  Sweat equity and shared sacrifice can mobilize and unite our society in a manner unachievable by any other approach.

So...quick--how much does California really want to bring its public works, infrastructure and economy into the 21st century?

Answer--that one is up to you to answer, because right now it doesn't appear certain that either the political leadership or electorate of California (that is to say, those who haven't yet been driven from, or fled from, the state) has the courage to get out of its collective comfort zone to do the right thing for this generation, and for future generations, of Californians.

(Ken Alpern is a Westside Village Zone Director and Boardmember of the Mar Vista Community Council (MVCC), previously co-chaired its Planning and Outreach Committees, and currently is Co-Chair of its MVCC Transportation/Infrastructure Committee. He is co-chair of the CD11 Transportation Advisory Committee and chairs the nonprofit Transit Coalition, and can be reached at [email protected] This email address is being protected from spambots. You need JavaScript enabled to view it. . He also co-chairs the grassroots Friends of the Green Line at www.fogl.us . The views expressed in this article are solely those of Mr. Alpern.)