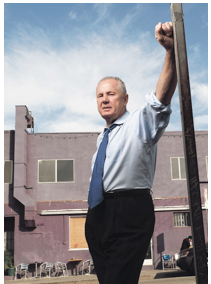 POLITICS - A motion appears on Tuesday’s City Council agenda that has been waived from being considered before its relevant committees (PLUM and Budget & Finance) and has seen no public discussion, has not been presented to neighborhood councils or constituent groups.  Where then, did this motion come from and why is it being rushed before the Council?

The motion (related to Council File 13-0046), seeks to delay the consolidation of the Departments of Planning and Building and Safety (with some additional entitlement/development functions being carried out by various other departments) into a new and yet unnamed department.

The process the measure seeks to stop has been in motion for many months and represents expenditures of $850,000 by the City in its quest to improve development services, code compliance and customer service.

The City has in hand a “Development Reform Strategic Plan” and has hired a consultant whose next report is due to the City later this month—on September 23rd.   What possible (good) reason could there be to halt the process at this time?  What are the consequences of a delay?

Tuesday’s motion seeks the preparation of a report to include “options, other than consolidation, that would improve the City’s development process.  The report should include best practices in other large municipalities, a cost benefit analysis, pros and cons of consolidation, other viable realignment options and an implementation timeline”  [Motion Price-LaBonge, 9/13/13].   The motion also directs that any and all analysis and actions currently underway to move toward consolidation be delayed until the next Fiscal Year this despite a joint report from the Dept. of Building and Safety (DBS) and Planning dated April 5, 2013, signed by the General Managers of both departments that recommended to the Planning and Land Use Management Committee of the City Council that their respective departments be consolidated into a new department in order to:

Public hearings were held both in PLUM and the Budget & Finance Committees where testimony by those in support and those against the proposal was considered prior to making their recommendation to consolidate development functions to the City Council. Managers of both departments testified in favor of the consolidation.

On May 29, 2013, the City Council approved the consolidation of Planning and Building & Safety as well as development functions from DOT, BOE and Fire and instructed the departments to work with the CAO and CLA to retain a management consultant firm to implement the consolidation, conduct outreach to stakeholders – including development industry, community groups, land use consultants, etc, and to look into the best practices of other cities that have consolidated departments.  (This is basically what the motion proposes, except that it proposes a delay.)

The CAO has reported that the departments involved in the consolidation were involved in every part of the preparation of the RFP, including the specific tasks and deliverables and the interview and selection of the consultant.  The CAO and the consultant retained by the City have given updates on their progress to PLUM (August and September) and to the Budget & Finance Committee in September.

The consultant has reported to PLUM and the Budget & Finance Committee that they are on time in the process and thus far have contacted several municipalities with blended departments.  The findings of these interviews will be presented in the consultant’s draft report to the CAO due on September 23rd.  The consultant will also be proposing a new department name which best reflects the missions and functions of the new department.

The consultant and the CAO have conducted various stakeholder meetings with VICA, CCA, and Neighborhood Alliance groups.  A presentation will be made next weekend to the PlanCheck NC group and to a larger neighborhood council group at the upcoming Congress of Neighborhood Councils.

While more discussion between the consultant and constituent groups is advisable and should be encouraged, there has been no effort to engage the community or time allowed for discussion of the pending motion.  Homeowner and business communities, Neighborhood Councils and NC Alliances have all been caught by surprise.

Moreover, all constituent groups engaged in the process are eagerly awaiting the consultant’s report in order to consider and weigh in on the benefits, findings, timeline, and overall recommendations.

The process needs to be completed in a transparent and public forum.  No efforts to delay issuance of the report due on September 23rd should be considered.  There is plenty of time to debate the findings and recommendations.  Why pull the plug when the need is clear, the process is already underway and the bill has been paid?

The motion is not necessary.   Those items requested in the motion have been part of the Consultant’s scope of work and have been undertaken by the Consultant as reported at various hearings.  The City has paid for this work project and should receive, discuss and review it.

IF full implementation is the path chosen after deliberation, it will be implemented in phases.  There is nothing constructive to be accomplished by attempting to delay something that will not happen immediately.  It could take a year or two to fully consolidate these two departments and other related departmental tasks.

The additional items proposed by the Price motion would require a new RFP, the allocation of additional City funds and more time that involved staff will have to devote to this task -- instead of performing their day-to-day assignments.  The current contract with the consultant already addresses most of what the motion purports to address.

The prudent and responsible action at this late stage in the process is to deny the motion proposed and instead to consider the consultant's findings and recommendations, and move forward toward a resolution, be it full consolidation or any option which improves development services and safeguards the needs of the communities.  If more time is needed as things proceed, benchmarks can be established to allow for more time.

The Neighborhood Councils and Alliance Board members should be given the opportunity to weigh-in at every phase of the process, since any decision will have a direct impact on how the community will be served in the future.

It is time to move forward with renewed commitment on the path to department consolidation. The process should not be hijacked at this point in the process.

City Council members:  You set the tone for improved leadership and management. It is up to you to carry forth the vision that has brought the process this far. Understand and be sympathetic to the fears and concerns of those who may be impacted.

However, know that any sudden attempt to put the skids on the process is counterproductive and will allow for those who revel and benefit from the current dysfunction to "win."

And that, dear leaders, is a NO-WIN situation for the City.

(Barbara Broide is a long-time community advocate and President of the WSSM Homeowner’s Association. She is an occasional contributor to CityWatch.)