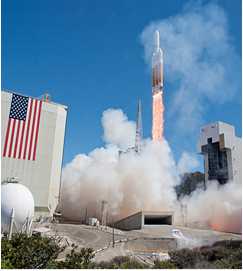 MAILANDER’S LA - Five, four, three, two, one ... It was a spectacular and spectacularly successful lift-off, out there from the launchpad at Vandenberg last week.  The USA shot a super spy satellite into the heavens and the Feds felt so good about it that they not only announced the launch but gave access to select journalists and photographers.

Like all other uncleared Americans who have no idea what the government either does to us or to others, I have no idea what the satellite does.  But I hope the surveillance geniuses at our local companies like Boeing and JPL put something on the despun shelf that might help locate some aerospace advocates in the City of Los Angeles, because when you peer down at City Hall from any angle, you have a hard time finding any.

The mammoth engines for the Delta IV rockets were made by Rocketdyne in Canoga Park.  That's in Bob Blumenfield's Council District.  I didn't see any congratulations stemming from his office.

The slide of LA from aerospace champion to potential also-ran in aerospace began in the early 1990's, shortly after the first Gulf War.  LA's enormous aerospace industry shuttered plant after plant as politicians told the people that our post Cold War "peace dividend" meant a diminished aerospace program.  Also, LA's aerospace firms in the 1980s and 1990s found themselves competing with entities in other states with more lax environmental laws.

Aerospace jobs simply moved out of town, especially to sun-belt destinations favored by President Clinton and southern Governors. Mayor Richard Riordan made aerospace a campaign bullet point but also looked on as parts of Hughes made tracks to Texas and Arizona.  Within days of becoming Mayor, he spoke to 3,000 aerospace workers at Rocketdyne.  But by 2000, there were over 1,000 acres of empty former aerospace buildings in the San Fernando Valley in industrial parks dotting the West Valley and the Western edge of the County.

While talking a good game, "Riordan’s interest in aerospace was non-existent, from what I recall," one aerospace industry advocate told me.  But Riordan did bring some jobs from points a little further west into LA's West Hills in 1998, into an old Hughes Missile Systems group building.

"[Eric] Garcetti made a point during the campaign of saying he was going to hire an economic development manager dedicated to aerospace – who is it? Has that person been hired? Have they even listed the job?" the same advocate asked me.

Aerospace may not be a good fit for Garcetti's Oxbridge-forged economics.  His wife and top advisor Amy Wakeland, whom the Mayor met while at Oxford, is more of a social justice crusader, more likely to ponder subsistence level wages at a car wash than how LA might bag 10,000 more middle class satellite and rocketry jobs.  Social justice causes are all over her curriculum vitae, as certainly as the Mayor himself likes affordable housing programs.

This kind of social justice prioritizing of economics is a good fit for the scattered neo-bolsheviks presently on the LA Times editorial board, especially those who fled the Weekly in the mid-zeroes, but it doesn't bring the kind of social order or community investment that more good aerospace jobs might bring.

But there is some hope on the horizon, especially at the County level, even if at the civic level LA interest in aerospace is lagging.  LA's Jobs Defense Council, an adjunct of LA County Economic Development Corporation, just this week formed a special lobby that will work towards strengthening LA's aerospace industry and "confronting sequestration"--the Congressional budget mandate that will drop defense contract spending by ten percent this year.

The special team is headed by a United Auto Workers' bigwig and a field officer for Supervisor Mike Antonovich who is a vet of Northrup Grumman's B-2 program.  The organization's five point plan for revitalizing aerospace includes forming a "red carpet" team of elected officials who might reach out to aerospace company executives.

The City of LA's soft stance on defense and aerospace jobs to-date has led at least one City Hall observer to wonder if Garcetti might also be trying to curry favor with the Obama Administration by tacitly accepting sequestration.  Whether true or not, accepting sequestration cuts is not something the Jobs Defense Council is interested in doing.