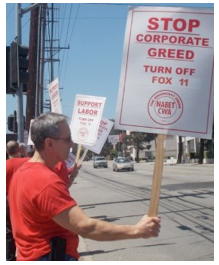 LABOR POLITICS - This week we mark the 50th anniversary of the March on Washington and Martin Luther King’s “I Have a Dream” speech. Few would argue about the importance of Dr. King in U.S. history and the decisive role he played in the civil rights movement.

Soon after his death, a campaign began to have King’s birthday declared a national holiday. Over six million signatures were collected on a petition to Congress to pass such a law, in what has been called “the largest petition in favor of an issue in U.S. history.”

Fourteen years later, MLK Day was observed in all 50 U.S. states for the first time.

And in 2006, Greenville County, South Carolina became the last county in the U.S. to officially make MLK Day a paid holiday.

Growing numbers of private employers also consider MLK Day a holiday. Companies as diverse as Costco, Alaska Airlines and Starbucks give their employees a paid day off or pay them time and a half if they work on MLK Day.

Which brings us to Fox Television.

This summer, Fox declared an impasse in contract negotiations with CWA/NABET Local 53, which represents the engineers, editors and photographers at the company’s two TV stations in Los Angeles, KTTV and KCOP. Declaring an impasse, after two years of sporadic negotiations by the company, gave Fox an excuse to impose a contract that slashed the wages and benefits of its union workers.

One of the first benefits Fox decided to get rid of was a paid holiday for Martin Luther King Day.

Fox also stripped a paid meal from its union workers, took away a week’s vacation, reduced their work week to 37.5 hours, and cut their pay over 6 percent.

Keep in mind, this is at a company that bragged to shareholders just a few weeks ago about the billions of dollars it was earning and predicted even more success in the future.

Greed alone is bad enough, but does Fox really need to insult the civil rights movement in its relentless search for profits?

Were he alive today, I think I know what Martin Luther King Jr. would say about Fox’s actions.

“Injustice anywhere is a threat to justice everywhere,” said King, who believed that boycotts, such as the 1955 Montgomery Bus Boycott, were powerful and effective tools for civic action.

In recent weeks, I have been writing too many of the advertisers on KTTV Fox 11 and KCOP-TV, to let them know that Fox has not been bargaining in good faith or treating its employees fairly.

If Fox doesn’t change its policies and return to the bargaining table, I’ll follow up with those advertisers and ask them to stop running commercials on the stations.

If need be, we are also prepared to lead a boycott of those advertisers.

We’ve gotten tremendous support from other union members from all over California, who recognize that our fight is their fight. If Fox gets away with this, other companies will take notice and go after MLK Day and other hard won benefits of union workers.

Together we can restore MLK Day, and the other wages and benefits that Fox took away from its workers. And we can keep Dr. King’s dream alive for future generations.

(Steve Ross is President of National Association of Broadcast Engineers and Technicians, NABET-CWA, Local 53. This column was posted first at  Labor’s Edge and later at FryingPanNews.org)