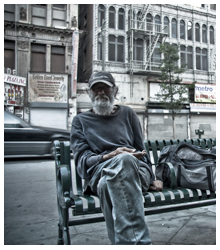 THE VIEW FROM HERE -  I once saw a poster of a metaphorical equilateral triangle, but it didn’t illustrate a math problem or a pyramid or a financial scheme.  In fact, it didn’t represent equality at all!

Instead, it illustrates a top-down economic reality, a truth that reflects the unforgiving foundation of every single civilization since the beginning of time.

At the very top—balancing precariously on that very narrow peak, that summit--stand the proverbial robber barons, the captains of industry, the politically powerful and well-connected.  They’re the people who know nothing of real labor (they consider their mental “exertions” more meaningful than actual physical drudgery); yet they stand on the shoulders of those who do, the people below them on the pyramid, the people who make it possible for that one percent to make all the money and to keep it.  Those at the top are held up by the laborers below, crushing each level until the foundation of the entire structure is about to be crushed from their sheer weight.

And at the very bottom of the bottom—almost beneath the foundation—exist the invisibles, the homeless!

For some time, I have been an advocate for the homeless (as have many of you).  I have been touched when I served meals to these special, grateful human beings.  I have held their hands and embraced their trembling bodies as they cried out their stories.  I have administered simple medications for people who needed so much more.  I have observed the broken bodies of people incapable of working, barely able to walk.  I have seen children whose only meals are provided by kitchens or by their schools—lucky if they get one warm meal a day.  I have also listened to people who tell of trying to sleep while others walk about aimlessly or yell out inexplicably--the untreated mentally ill who wander around children and women who can barely sleep because they are afraid they will be accosted during the night.

Then there are the people who depend on buses to get them to work or a job interview but arrive too late due to impractical transportation schedules, and so they are fired or miss out on a potential position.  What of the young people who are driven downtown only to be thrown out of the car by their own parents who no longer want them and tell them never to contact them again—children who have not finished school and  are too young for work permits, so they turn to prostitution as the only way to survive?  What of them?

And the shelters … people depend on shelters for a shower but may have to settle for a sponge bath because a shower is not available.  And the shelters … if  homeless individuals or families are lucky enough to be accepted into them, they can only stay so many days before they are turned out onto the streets once again.

I recount an incident from not all that long ago:  I was on my way to an early Saturday morning conference on a cold winter’s day when I approached a downtown off-ramp.  There had been no traffic until I tried to get off the freeway.  It took me a half hour just to get to the bottom but I still needed to make two quick lefts.  What was the traffic jam?  I am going to be late!  I saw police cars and officers whom I thought were annoying homeless men and women who were just trying to sleep peacefully under the overpass.  I began to roll down my window to scold the patrolmen, “Leave them alone!  They are harmless!”  Then I saw it.  Oh, dear God.  Two dead gentlemen, one covered already; the other, only up to his face.

I have never forgotten that scene.  I wanted to cry but I was also filled with helpless fury and a sense of powerlessness.  I have shared that story countless times, hoping others would become equally outraged and would feel compelled to change a society that looks away when the less fortunate come toward us.

I share all this because there are so many misconceptions about the homeless, and the wretchedly shameful conditions they experience, about those who are but one small step from joining their ranks, from losing their homes only to sleep in cars or under a card board “roof” on the streets.

Many people think they choose to live that way.  I think, however, that people choose to believe  the homeless want to live that way.  They choose to believe this convenient untruth because so many people are unwilling to face what is really transpiring in their own communities.  Accepting the veracities surrounding homelessness would force them to do something about it—their consciences would demand action, but it is so much easier to be in denial and blame the blameless.

We talk about people “yearning to be free”—free from poverty, hunger, illness, abuse, abandonment, joblessness, homelessness.  What would Emma Lazarus say about these unfortunates after all these years?

One of my former students, Joey Meyer, addressed this issue in his magnificent chinquapin entitled “Cities”:

are cold and dark

with silence all around.

Some people are homeless in them.

Whoa!  I don’t know about you, but I wasn’t expecting that ending!  That last line is filled with anger and disappointment.  It demands, it insists, it challenges us to commit to do something real—not merely to give lip service to what is a travesty in the richest country in the world. We help everyone, everywhere when there is an emergency—as we should!  We are lucky to be in that position.  But at the same time we persist in looking away from the tragic circumstances that too many of our own people face every day.

Remember Edwin Markham’s all-to-fitting poem, “The Man with a Hoe”?   Over a hundred years ago he spoke so eloquently, so poignantly, so passionately about the evil his words reveal.  How prescient he was!  He warned us that this strong but battered protagonist has been “Bowed by the weight of centuries” with “the emptiness of ages in his face, And on his back, the burden of the world.”

This is the same man that the “masters, lords, and rulers” of the world have created to perform excruciating toil with little offered in return for his efforts.  Markham ultimately asks how these lords of industry and power will answer to the rest of us (and to a higher power).  How will they answer to those they have worked so mercilessly and taken for granted “after the silence of the centuries”?

I ask the same thing (though less eloquently).  I speak not only on behalf of the homeless but for any of us who are down-and-out or about to be.  We can no longer look away.  There but for the grace of God go any of us.  Yes, we should be our brothers’ and sisters’ keepers.  I think it is a moral imperative.  We really have no choice.