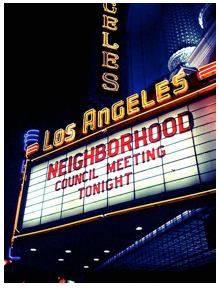 NEIGHBORHOODS LA - In my pursuit to see if BONC (Board of Neighborhood Commissioners) is “bunk” it is like discovering a Pandora type box …Not as awful- but ask one question and it leads to another, which leads to another etc.

It is really easy to sit on the sidelines and criticize.  Most everyone I talked to had an opinion.  Of course, that is to be expected from a Neighborhood Council group.  They are nothing---if not verbal and  opinionated. To be fair I devised a questionnaire to send to the current BONC Commissioners.

Here are the questions along with my very diplomatic request:

“I am writing a series of articles on the Board of Neighborhood Commissioners (BONC) for CityWatch LA and would appreciate your answering a few questions.  I want to make sure that I quote you accurately.

“There are divided opinions as to BONC’s effectiveness and whether it should continue in the same form, be enlarged and given more power, or downsized.  I am collecting opinions from NC and other community leaders, because the Mayor will be appointing a majority of new members soon and it is important that he look at this commission from all sides.

“You are in the best position to judge the strength and weaknesses and to be able to make suggestions as to the BONC’s future role.

1)     What do you think is your greatest accomplishment as a BONC Commissioner?

2)     What do you think is the Commission’s best accomplishment for the year that just ended?

3)     Do you think BONC should include more Commissioners to reflect the LA Area?

4)     Should there be a minimum mandatory attendance for the Commissioners?

6)     Since Empower LA has most of the control, do you think BONC is necessary?  Why?

7)     If you could make one suggestion to improve BONC’s effectiveness, what would it be?

The response was varied.  The longest serving member Linda Lucks (Venice NC) wrote a thoughtful and complete response. Daniel Gatica wrote that since he was not active for nine months he couldn’t really comment.  Gatica was appointed to represent the North San Fernando Valley.  Apparently, the former Mayor couldn’t find one person to replace him during the nine months.  On the other hand, I can think of a dozen very qualified candidates.

There is some disagreement as to how BONC was initiated. One of the founders and first General Manager of the Department of Neighborhood Empowerment, Greg Nelson, commented  “The City Charter language tends to still confuse some people because it gives the BONC, and its seven members, the power to establish and oversee policies.  However, a general thrust of the new charter was to remove as many city departments as possible from the City Charter and have them exist only by ordinance.  The Charter also states that the general manager of the Department of Neighborhood Empowerment (as that is it's legal name despite what anyone else says) be in charge of the day-to-day operations.

“When the Plan for a Citywide System of Neighborhood Councils was developed, as required by the charter, BONC's duties got enumerated.  It was decided that they would receive the applications for certification from the neighborhood council organizing groups, along with the report from DONE, and make the final decision.  Therefore, BONC could establish policies such as the one that requires applications from neighborhood councils to include a requirement that agendas be posted in multiple locations.  But they can't tell the general manager how to conduct day-to-day operations.”

Of course all this could be moot because Mayor Garcetti could decide to appoint all new commissioners.  Each commissioner writes an undated letter of resignation when they are appointed.  So far the Mayor hasn’t given any indication as to what or when his actions can be expected.

According to Ms. Lucks, “The Commission is necessary to look at the big picture and address policies and regulations.  The problem is … this is a hybrid Commission with no management power.

“Cooperation with the Empower LA General Manager and the City Council is crucial.  Commissioners have been frustrated that our body can’t impose our recommendations unless the Department agrees and carries out our will.  The previous GM chose to not work well with us.”

Another roadblock, mentioned by several sources, is the City Attorney staff.  They sometimes take months to render mostly negative decisions. Usual decisions are “You can’t do that”.

Several BONC policies have been negated because the law could have been interpreted several ways and in typical bureaucratic decision-making, the staff person was loathe to go out on a limb.

Now, with a new City Attorney, who is familiar with NC’s, there might be a different attitude. It would be a refreshing change to get a comment such as “You can’t do it this way but if you change the wording etc., it will work.”

I didn’t intend to spend so much time on the analysis of BONC but if the NC system is going to flourish in this second decade -everything should be on the table.  So the investigation starts at the top, which is BONC in theory- but not in practice.

Next article will include the comments from the other commissioners, as well as NC leaders. The saga continues.

As always I appreciate your comments.