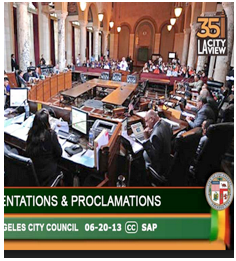 CITY HALL - Why would an honorable man like Bill Rosendahl second a slimy motion by Ed Reyes (& his candidate Chief of Staff Jose Gardena) to virtually give away public land to Kia of Glendale?

Why would the well thought of former ‘outsider’ Joe Buscaino, Chair of the 2 member Information Technology and General Services Committee, take a tie 1-1 vote, and send the Item back to the Council as a solid Recommendation to Approve the deal?

Why would the LA City Council with virtually no debate, rush to approve this deal on a 10-0 vote before Councilman Elect Gilbert Cedillo could  take office (even though he had beat Gardena in the runoff and everyone knew it)?

And finally, why would the lame duck City Attorney and the equally lame duck Mayor sign off on the deal on their way out?

Why indeed. It is not that our elected officials are crooked, harbor evil intent, or have ‘For Sale’ signs in their Council Offices.  Rather they are the players and the victims of the bizarre and byzantine system of LA City governance, that’s why.

Did you ever wonder how a self-proclaimed liberal democratic system produces 10-0, 11-0 and 15-0 votes for virtually all items on the Council agenda?  First you create a bewildering system of Council meetings, agendas, committees, special committees, and odd hour meetings, so that no normal citizen has a snowball’s chance in hell of ever figuring out how their government works.

And just to make sure, you make lengthy and incomprehensible Council Agendas padded with puff items, meaningless discussions, and lots of Awards -- so the real stuff can be buried in the details linked to the Council Files, instead of being clearly stated in the agenda item description itself.

Then you have the City Attorney’s office bless arcane Council Rules, such as having a “Committee of One” where the Chair of a committee can act on agenda items with no one else present, or a Council Rule that on a tie vote the Chair of a Committee wins the day and the matter is recommended.  That’s how.

You create and become slaves to a system of 15 fiefdoms.  Independent fiefdoms that are not accountable to the general public for the public good. The real rule of the LA City Council is ‘don’t mess with my district, and I will not mess with yours.’

You ignore the fact that the actual fiscal & governance business of the City could be accomplished in one Council meeting a week, with a reasonable sized agenda written in comprehensible language.  Of course if someone actually did this, it would be easy to figure out who was violating what law, such as the Ralph M. Brown act or the California  Public Records Act, and see who was engaging in unethical or highly questionable activities like the Kia deal.

As a result of this mind-numbing system,  we the public have a LA City Council of 15 fiefdoms, where new legislators are quickly taught that they better get with the program and stay out of the other district’s business, or they will be ostracized, ignored, given meaningless committee assignments, and generally neutralized until they are replaced.  Over time, the council members succumb.

If you have never been a bureaucrat in a public agency, I know that you may find these  assertions hard to believe.  Having been a bureaucrat, and worked with and for public agencies for most of my adult life, I can assure you that there are many good people who start out wanting to serve the public by becoming an elected official. And they do indeed get ground into the dirt over time -  by a combination of having to appease enough special interests to get elected/re-elected and trying to master the indecipherable intricacies of the bureaucracy.

The prize ultimately become the fifteen City Council seats (the highest paid in the United States of America), sitting around for their twelve year terms, looking to justify their existence without having to do a lot other than proclamations.  And also one could argue, looking to pay back the very large sums of money that put them in office by simply using the tools that their predecessors, lobbyists, and insiders have so conveniently built up through years of ossification.

While this particular article was prompted by the blatant shopping of public land on San Fernando Boulevard as an election payback, it could equally have been over any number of not-that-distant deals by the City Council.  For example, there’s the debacle billed as a victory regarding Elephant Hill by Councilman Huizar, or Councilman Koretz’s 50 year $1 per year lease of an Encino Fire Station to the Armenian Cultural Foundation,  or the Council’s efforts to give a 25 year/$60 million subsidy to the Village at Westfield Topanga (yes, I guess the multi-billion dollar developer Westfield needs it).  The list goes on.

In sum, we are ruled by a self-perpetuating system, that is incapable of change from within, and ultimately this is the system that causes good people to do bad things – to us.

It’s the system that allows elected officials to come to believe that public assets held in trust for the public are in fact their personal property and are to be disposed of as they see fit.  As long as they don’t ask any real questions about what the other 14 Council Districts are doing, of course.

I don’t pretend to have the answers – I simply hope that a real discussion will take place, and would be delighted to take part in one.