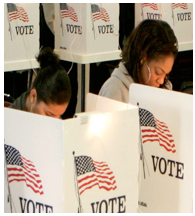 GUEST WORDS - The Trayvon Martin case has once again reminded us that racial divisiveness isn’t going away any time soon in America. The verdict is being debated all over. There are protests in numerous cities. But the Martin verdict and the ensuing protests will nevertheless not have as enduring an impact on how our government works at all levels as the simple act of voting. The surest tool to guarantee that racial discrimination does not occur is the ballot box, to ensure that all Americans eligible to vote have full opportunity to do so.

The Supreme Court’s ruling on the Voting Rights Act, revealed in late June, along with recent actions by a number of states to make it harder for people to vote, are likely to have major consequences for the politics of race.

The Constitution generally leaves voting rules to the states, except where Congress, the courts or constitutional amendments have acted to protect groups from discrimination in voting — including women, racial minorities and the young. The 1965 Voting Rights Act (VRA) was intended to rectify decades of discriminatory practices, especially in the South, and, as recently as 2006, was extended as amended with overwhelming bipartisan support and the signature of President George W. Bush.

The VRA imposed national rules on all the states and managed to discomfort both political parties.  Southern Democrats, after all, were the main targets of the 1965 Act.  Democratic California could not allocate black and Hispanic populations to keep Democratic incumbents in power. Minority voting rights groups used to regularly sue California and Los Angeles about district lines. It also prevented Republicans in Texas from drawing lines to disadvantage minorities.

Lawsuits from minority groups often drew support from Republicans, who did not mind the breakup of “safe” Democratic districts in order to create more minority districts.  It was recognized in both parties that attempts to limit voting would violate the VRA.

After Barack Obama won the White House in 2008 with a new coalition of younger whites and racial minorities, Democrats believed they were on the winning side of history. Only two years later, Republicans swept to victories in midterm elections — nationally and statewide —- not just in the south but also in such industrial states as Pennsylvania, Ohio, Wisconsin and Michigan.

Among the main legislative priorities of these newly elected Republican state governments was the enactment of voter ID laws and other limitations (such as on early voting) that disadvantaged minority groups who were less likely to have the IDs and who tended to heavily utilize early voting. (In Florida, state Republicans also passed the “Stand Your Ground” law that played a role in the Martin trial.)

The VRA provided some protection against these laws. But now the Supreme Court has voided the long-standing “pre-clearance” requirement for those states (mainly in the South) that have had a history of discrimination in voting laws. Within a day of the court’s decision, southern states began imposing new restrictive voting laws and redistricting plans (as in Texas) intended to weaken minority representation.

Thomas Edsall recently predicted in The New York Times that the court’s VRA decision will give Republicans a lock on 11 southern states for years to come, by restricting opportunities for Democrats to win elections — through redistricting — and by limiting the ability of blacks to vote through voter ID and other laws.

We will soon have two voting regimes in the United States, one of states like California trying to expand voting and another of states trying to restrict it. But this leads to the following question: What happens if those wanting to restrict minority voters win control of both houses of Congress and the White House and pass national voting laws similar to those that emerged after the 2010 midterm elections?  Will the Supreme Court allow the dual regimes to continue?

This reality casts a sharp light on the debate about whether Republicans, in weighing immigration reform, can remain a largely white party or must become more diverse.  Without the core of the VRA, Republicans will not have to look over their shoulders in the South, and they can build a base of states entirely without minority voters. With control of many states, a lock on the House of Representatives and a sympathetic Supreme Court majority, Republicans might be tempted to go on as they have.

But another block of Republicans that long supported the VRA does not want to commit the party to a whites-only strategy built on low levels of minority participation.  Hopefully, there will be bipartisan support to rebuild the crippled VRA.  That would be good for both parties and certainly good for the nation. In the absence of a bipartisan solution, much will depend on the outcome of midterm elections in 2014.

The effort to protect and expand the right to vote is entering a new phase, not unlike the early days of the civil rights movement. The lesson of that era is that voting is precious and must be defended in the courtroom, in the political arena and in the neighborhoods where people live and vote, even if it means personally helping a voter in another state to meet excessively difficult requirements intended to discourage voting.

While it may be a while before voting rights regain their recently lost bipartisan umbrella, and while that would be an outcome to be greatly welcomed, it remains urgently important now to nurture and protect the franchise.