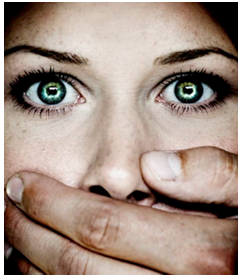 DOMESTIC VIOLENCE - A newly released study conducted by the World Health Organization verified that approximately one-third of the world’s women will be victims of domestic violence during their lifetime, and 40 percent of homicides in which the victim is a female are the result of domestic violence.

It should be clear, then, that this is a serious issues affecting millions of women (and some men) worldwide. Why is it, then, that I am still reading garbage like that being promoted by the followers of Christian Domestic Discipline (CCD)? These religious zealots are spreading the notion that spanking a wife is appropriate if it disciplines her to be submissive, women’s supposed god-given role.

The Packet even goes so far as to describe which implements one should use so as to ensure the right amount of “sting.”

It is sickening that anyone, and according to reports in the Daily Beast and Huffington Post, an increasing number of people, really believes that beating their partner is a way to ensure a healthy relationship. It is this type of controlling behavior that is the very root of abusive relationships.

Further, what this teaches young people about gender roles and the expectations for men and women is likely to exacerbate the issue, which Dr. Margaret Chan, head of the WHO referred to as “a global health problem of epidemic proportions.”

To each his or her own religion, to be sure. But it is hard to imagine that Jesus, the Prince of Peace, would have supported demeaning and abusing your partner.

(Laura Finley, Ph.D., teaches in the Barry University Department of Sociology & Criminology. This column was provided by CityWatch and  PeaceVoice.)