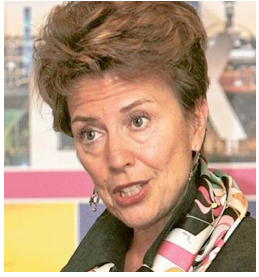 ALPERN AT LARGE - For the last decade and more, there have been many elected officials, newspaper reporters, and grassroots efforts (including my own Friends of the Green Line initiative) who have tried to unearth why the Green Line never made it to LAX.  I started the aforementioned initiative shortly after 9/11/2001, and although we originally tried to remain independent of the other LAX reconfiguration controversies, there persisted one unavoidable conundrum:

For as long as can be remembered, LA World Airports has a "groupthink" problem of believing they own the City of Los Angeles, and not the other way around.

Gina Marie Lindsey has made some undeniable progress in upgrading LAX since her appointment in 2007 as Executive Director--the fast-tracked international upgrades and a myriad of other terminal/facility upgrades are proof positive of that...but, as the Daily Breeze points out, the question of whether she deserves to keep her job is one that merits consideration.

To my way of thinking--and I hardly doubt I'm standing alone on this item--the role of the Executive Director at LA World Airports (LAWA) is to implement the vision of the Mayor.

And our new Mayor, in case anyone is living in an alternate universe, is one Eric Garcetti.

So the answer as to "who should be in charge at LAX" appears to be rather simple:  if Lindsey or anyone else is being chosen to be the ongoing or new LA World Airports Executive Director, she/he had better be ready to implement the "Garcetti Vision in Transportation, Planning and Commerce."

Yet that very vision is--to my guess, one that is being cautiously and exhaustively pondered by our new Mayor and his staff, which is how it should be at this immediate moment.

I commend Mayor Garcetti for keeping trusted and smart veteran Borja Leon over from the Villaraigosa Era, and I commend Ms. Lindsey, former Mayor Villaraigosa or anyone else who--to the necessary loss of Paul Koretz in CD5--got brilliant folks like Lisa Trifiletti and Christopher Koontz to work over at LAX.  We've never had such a brilliant brain trust at LA World Airports and the Mayor's office as we have now.

Yet the problems facing Antonio Villaraigosa when he entered office following Mayor Hahn (who failed miserably in his unilateral, LAWA-dominated approach to reconfiguring LAX) are very different than those facing Mayor Garcetti now that he's entered office.

Villaraigosa also needed Measure R to gain both the immediate fiscal capital to do this, and to gain the respect of Washington for a variety of reasons--not the least of which was to promote a long-overdue America Fast Forward program to allow federal bridge loans to states and localities willing to put their money where their mouths were.

Unfortunately, as myself and others learned to our collective horror, Mayor Villaraigosa was willing to throw the very same Angelenos he relied on to pass Measure R, and to fund our necessary transportation projects, under the bus (no pun intended).

Case in point:  the Casden Sepulveda project, which was so poor in land use planning, and so awesomely inappropriate (if not downright illegal), that the very benefits of the Expo Line we're funding were almost singlehandedly negated with this project...and the credibility of Downtown and the Planning Department is at serious risk of being destroyed in the minds of Angelenos active in Neighborhood Councils and community/homeowner organizations.

And with the Times as a willing participant in the one-sided trashing of the very same community leadership necessary to help our City pursue a legal and proper policy necessary to move forward in the 21st Century, the grassroots is now living in an Orwellian world where the truth is turned incessantly on its head.

Ditto for the Hollywood Millennium and LAX Expansion projects:  proper policy, sustainable and environmental policy, and legal policy can't be dropped because of political expedience.  The Times and the City Planning Department can throw these regions under the bus for "Overriding Considerations", but alienate too many swaths of otherwise-volunteer, idealistic Angelenos and you can kiss future revenue raising efforts goodbye!

So the problems facing Garcetti (and the rest of us, because we really ARE all in this together, accept it or not) are political, and a sea change in the Villaraigosa Era is needed to restore the trust, faith and partnership of Angelenos who've morphed into betrayed objectors after years of disrespect from City Hall.

In everything from our roads to our rail/bus system to our airport system, we will need to raise revenues someday, make no bones about it--but fixing the City's leadership and spending problems involves a critical series of first steps before that can EVER happen.

So when LA World Airports presented a series of concepts to connect LAX with our budding MetroRail system, it both raised hopes and fears that LA World Airports was still living in its own bubble, was still years behind Metro in its vision on how to connect with the rest of the region, and (of greatest importance):

It showed that the unwillingness of LAWA to partner with Metro and the City of Los Angeles was always, and remains, one of the greatest reasons we never got the Green Line and MetroRail into LAX.

(And behind the scenes, the enabling Federal Aviation Administration and intransigent airlines are also the source of much of the blame, to boot!)

Yet while LAWA is being dragged, years if not decades late, into getting MetroRail into LAX, the concept of "better late than never" is both fair and accurate.

So the next Executive Director, at least at how this rail/transportation/economy/mobility/environmental advocate sees it, has at least three major problems to address and prove her/himself:

1) MetroRail must connect to LAX, and whether it's an Automated People Mover indirect connection at Century/Aviation or whether the Green and Crenshaw Lines are directly connected underground, LAWA must be willing to cede some control to Metro and the City of Los Angeles...particularly if Metro and the City/County are going to pay for it.

2) Metrolink and MetroRail connections to both LAX and Ontario Airports should no longer be relegated to the role of science fiction.  We need the Inland Empire as a partner, not a rival, when it comes to funding a regional rail and airport system.  Metrolink/MetroRail connections between Century/Aviation and Downtown Union Station, as well as to Ontario Airport, must be funded and expedited in any long-range Metro plan.

3) Both the LAX and Ontario Airport regions must be a source of well-paying jobs with benefits (that includes health care, by the way!).  Quality jobs to establish LA and the Southland as the port of entry for the Pacific Rim, and as a manufacturing and commercial powerhouse, should be a primary goal of all parties involved with airport renovations.

And to best achieve these measures, an affable, political and respectful Eric Garcetti should be as kind to Westchester as he is to the Inland Empire, and with an Executive Director at LA World Airports to allow him to achieve a dossier of accomplishments that are both necessarily commercial and political alike.