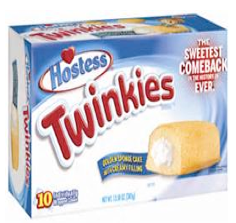 LABOR POLITICS - The return of America's favorite spongy cake and goo, better known as Twinkies, is being marketed as "the sweetest comeback in the history of ever".

For whatever reason, Twinkies are one of those items, like the Big Mac, Oscar Mayer wieners and Oreos, that have an iconic status. We know they aren't particularly good for us. We're not entirely sure what's in them (Twinkies even have something new that extends their shelf life a few more weeks), but most of us have eaten them at some point. They remind us of childhood when we had deep discussions about the right way to eat the oval-shaped cakes (In one big gulp? Eat the filling out first? Savor every bite?)

When Hostess, the parent company that makes Twinkies and other bakery delights, filed for bankruptcy last year and then announced it would shut down in November, people bought out all the Twinkies in stores within hours and boxes started appearing on eBay for astronomical amounts. So it's easy to see why the return of Twinkies this week is generating a lot of fanfare.

But there's a sour side to this comeback that's getting lost as millions of boxes Twinkies hit the shelves again: this is also a tale of 18,000 job losses and questionable corporate management.

Just ask Erwin Merrill of Westbrook, Maine. Merrill is a former Hostess employee who was laid off when the company closed. He worked there for over a decade, doing everything from mixing cakes to shipping. He has vowed never to eat a Twinkie again:

Corporate America just don't care about the little people. The people who actually did the work for them got the short end (or shit end, excuse my French) of the stick.

Merrill used to be paid $15.51 an hour with benefits and "enough overtime to take care of the bills". He hasn't been able to find full-time employment since he was laid off. His new job pays $11 an hour, but comes with no insurance since he's only part-time. The plant where he used to work was bought by another company, but he says it has refused to hire the old workers out of fears of employees unionizing.

A spokeswoman for the revamped Hostess company said it plans to grow to 1,800 workers soon. To put that another way, Hostess went from over 30 major bakery centers to four, and many of the former workers were not rehired. It hasn't been such a great comeback for many old employees – or taxpayers who picked up the tab for various programs to aid the laid off workers.

When Hostess was threatening bankruptcy last year, the headlines centered on the greed of the unions, especially the Bakery, Confectionery, Tobacco Workers and Grain Millers International Union, and how they were driving the company into the ground.

Like most stories, it's a lot more complex than that.

Keep in mind that Hostess had been in and out of re-organizations for about a decade and had filed for bankruptcy before in 2004. Anyone who followed the company even loosely knew that it had failed to evolve its products over the years.

By the time the last ditch negotiations with the unions started in 2012, Hostess was offering to pay workers like Merrill less than they had been paid when he started with the company 13 years prior. He recalls the day the CEO showed up at the Maine plant to try to convince the union to take the deal:

He comes in an Armani suit and $5,000 Rolex on the wrist and tells us to take the deal. And we're like, well, where's our pension? He couldn't answer us. They stole our pension.

Reports confirm that the company had taken the pension payments for a year and repurposed them.

Top management also raised their own salaries just before the company's bankruptcy filing.

Even after months of unemployment, Merrill says he would still vote to reject the company's final offer.

This was a textbook case of a lot of problems coming to head at once, including too much debt from private equity and hedge fund owners trying to squeeze the company. The old Hostess was carrying about $1 billion in debt. There was certainly room for a deal with workers, but after years of poor decisions from management, it's somewhat understandable why those like Merrill weren't ready to sign whatever was on offer.

As Hostess tries to re-invent itself, it's "sweetest comeback ever" promo should be taken with a huge grain of salt.

(Heather Long is assistant editor for The Guardian's "Comment is Free US." This article was posted first at The Guardian)