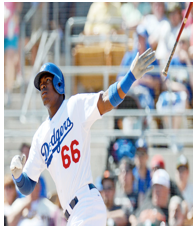 ALL STAR GAME POLITICS - If you don't follow baseball, you may be unaware of the controversy simmering around Dodgers rookie Yasiel Puig. He came up from the minors less than two months ago, has played on a level comparable only to that of the early Joe DiMaggio, and has singlehandedly (okay, with both hands) lifted the Dodgers from the ignominy of overpaid underperformer status into credible pennant contenders. Fans nationwide gleefully wrote him onto the All-Star team by online ballot.

Puig has played, as of this writing, exactly 33 games in the Major Leagues. The Dodgers, who had a lot of money, now have a lot less, because they agreed to pay him $42 million over seven years.

Old school baseball players and their managers take offense to the All-Star designation for a player who has barely gotten his uniform sweaty. But the people want Puig, and Puig they shall have, when the All-Star Game takes place in New York next week.

Baseball traditionalists believe that All-Star status is something one earns over time. Casual fans couldn't care less about a player's body of work; they're just interested in stars, which Puig, at least for the short term, now is. Sports talk radio commentators recognize that baseball has a phenomenon in Puig and that the All-Star game is a marketing showcase. Failing to include Puig, therefore, would be an unpardonable offense.

Puig had the good fortune to come of age in the age of American Idol, when you can become a star literally overnight. You don't have to spend years paying dues; you just go viral. Consider the difference between yesterday's Frank Sinatra and today's Psy. Sinatra toured with big bands for years before he hit; Psy, the Korean voice of "Gangnam Style" (two billion YouTube hits and counting) became a planetary legend with one video. If extraterrestrials exist, they are probably on Alpha Centauri doing the horse dance and singing, "Hey, pretty lady!"

And so it is in sports. LeBron got his $60 million deal with Nike before he stepped on an NBA court. Andrew Luck signed to quarterback the Baltimore Colts for $22 million prior to throwing a single NFL pass. And now Yasiel Puig has parlayed seven undeniably great weeks into eight figures.

The veteran players may or may not begrudge Puig the money; they definitely resent his sudden All-Star status. That's because they come from a world where what you do over a long period of time defines who you are. Puig, baseball's flavor of the month, leaves a sour taste in their mouths.

In baseball, hitters and pitchers "solve" one another. Meaning that tendencies are analyzed and baseball experts do everything that can to drag outliers back to the mean. In the sport's language, the goal is to create a "book" on a player: identify his weaknesses and capitalize on them. The fastball hitter may have trouble with a slider; a particular pitcher may struggle to keep the ball down. Once word gets out, it's much harder for a phenom to keep up that initial momentum.

This may or may not happen with Puig. He could be the next Henry Aaron. Or not. He could also run into serious trouble. If you listened to sports talk radio the week before the Dodgers elevated Puig to the majors, the topic was the fact that he had enormous trouble coping with authority. Not quite "cancer in the clubhouse" material, but the verdict among baseball men was that he was too immature to handle the pressures of the big leagues.

So now they're putting him front and center at the All-Star Game.

There's something to be said for the old way of doing things, where you had to earn your stripes, pay your dues, work your way to the top. Those of us who are a little older and come from that world are grateful that YouTube didn't exist when we were in our twenties or Facebook when we were in our teens. We're very happy, thank you, that the mistakes we made in our callow years aren't on our permanent technological record.

I have no problem with Puig playing in the All-Star Game; he's definitely a star and baseball is the world's worst sport at marketing himself. We've just seen what happens to people, especially those in the public eye, who receive too much too soon. From Aaron Hernandez (New England Patriot accused of manslaughter) to Lindsey Lohan (actress accused of everything), it often turns out that sudden success is no gift from the gods.

I wish Yasiel Puig the greatest of success, personally and professionally, not that he's ever heard of me or cares about receiving my blessing. I want him to stay on the baseball diamond and not the police blotter and enjoy his newfound celebrity.

It used to be that it took ten years to become an overnight success. In today's world, it can take ten years to get over having been one.