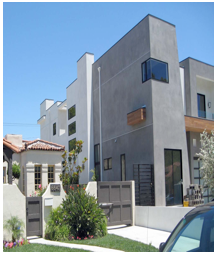 LA’S NEIGHBORHOODS - Encircled by West Hollywood, Beverly Hills, Carthay Circle, and Park La Brea, the area of Beverly Grove has been under siege for nearly a decade.

Hulking McMansions built on spec defy the scale and character of the neighborhood and deprive their nearest neighbors of light, air, and privacy.

Relief finally may be in sight for this charming residential enclave.  An ordinance that comes up before the City Planning Commission next month could snatch Beverly Grove from the jaws of the speculators.

Most of its roughly 700 homes were built in the 1920s and 1930s on lots of about 6,100 sq ft.  Styles include Spanish, Mediterranean, Tudor, Norman, English Cottage, and Heinz 57, and the houses average about 2,000 square feet plus detached garage.  But on these modest city lots, cowboy contractors have crammed dozens of tall, boxy houses that measure about 4,400 square feet including their attached garages.

In 2006 the City granted Beverly Grove a temporary ordinance.  In 2008 it passed the Baseline Mansionization Ordinance.  Even at a glance, it’s clear that neither measure put a stop to mansionization.  In 2011, the City Council adopted Paul Koretz’s Motion for a Beverly Grove RFA Overlay District.  To the immense relief of beleaguered Beverly Grove, the Planning Department will finally bring an ordinance based on that Motion to the City Planning Commission in early August.

Bottom line:  The mansionization of Beverly Grove violates City policy on every level.

The remedy is at hand.  The proposed ordinance based on Councilmember Koretz is a model of simplicity and sensible compromise.

The proposed RFA ordinance allows for change and renewal but keeps the scale and character of the neighborhood.  It honors community values and City policy.   Now the City just needs to pass it.

(Shelley Wagers is a long-time community activist. She lives in Beverly Grove.)