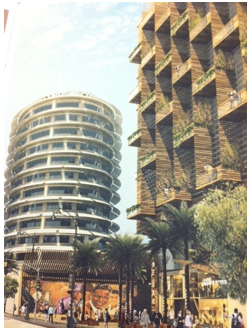 LA WATCHDOG - At the Planning and Land Use Management Committee on Tuesday afternoon, June 18, that was attended by an SRO (standing room only) crowd of over 250 people in the John Ferraro Council Chamber Room, the New York City developers of the Millennium Hollywood project agreed to reduce the height of its two towers from a total of 100 stories (55 stories for the East Tower and 45 for the West Tower) to 76 stories (39 stories and 35 stories), a reduction of 26%.

They also agreed to delay the hearing before the full City Council to July 24 from June 19.

However, according to several council staffers, this was a done deal before the meeting. Otherwise, how would the developer been able to make such a significant change on the fly and a staffer from the office of Councilman Eric Garcetti been able to say so quickly that Eric approved of these changes.

In addition to accepting these preordained changes, the members of the PLUM Committee, Councilmen Reyes, Huizar, and Englander, referred the project to the full Council for its approval, summarily turning down the appeal of the Hollywood community to this oversized development that was approved by the politically appointed and conflicted City Planning Commission.

However, while these three self-proclaimed land use specialists accepted this so called concession, the reduction in the height of the two towers will not reduce the density of the project or mitigate the resulting gridlock.  And Hollywood’s skyline will still be blighted by the twin towers.

Nor did these three geniuses take into consideration a number of significant issues raised by the Hollywood community’s attorney, Robert Silverstein, indicating that the Committee meeting was all show to appease all the Hollywood residents who, for the second time, made the effort to schlep downtown during the middle of the work day.

There are several significant issues that have not been addressed, all of which will be the basis for continuing litigation against this gridlock causing monstrosity.

The Committee failed to acknowledge that the criticisms of the California Department of Transportation which determined that the City’s analysis was flawed because it failed to determine that this 1.1 million square foot project would make the surrounding streets unsafe and negatively impact the 101 during peak hours.

Nor did the City’s analysis take into consideration the cumulative effect on traffic of the other 57 projects in Hollywood, including the new Target at Sunset and Western.

The Committee also did not take the time to analyze the claim that the developer failed to disclose (or possibly covered up) that the twin towers may sitting on a geologic fault that would result in severe damage in case of an earthquake.

Nor did the Committee consider that the blatant financial conflict of interest of William Roschen, the politically appointed Chairman of the City Planning Commission, tainted the findings of the Commission.

There are a number of other issues that were also not considered by the three wise men, including, but not limited to, the lack of adequate parking for the residents of the 492 multimillion dollar luxury condominiums who will NOT be taking the Red Line or the bus to work, the delay in emergency response times, the flawed Hollywood Community Plan, and the lack of detailed building plans, all of which have an impact on the Environmental Impact Report and the findings required by the California Environmental Quality Act.

Rather than proceed with the current oversized Millennium Hollywood plan, the parties should take a lesson from the recent settlement that the Westside residents made with developer Alan Casden with the help of Bill Rosendahl and Paul Koretz. In this case, the project at Sepulveda and Pico was downsized to a three to one Floor Area Ratio that eliminated 150,000 square feet of retail space and cut the impact on traffic by 75%.

Otherwise, without a reasonable compromise that respects the community, Hollywood will be a war zone, turning it into the poster child for overdevelopment, fueling the distrust of City Hall by not only the Hollywood community, but the rest of the voters who already are fed up with the shenanigans of our Elected Elite and their campaign funding cronies.

Eric, is this how you want to start your new administration?