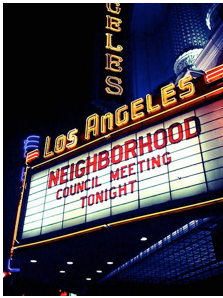 NEIGHBORHOODS LA - When I first considered writing articles about the LA Neighborhood Councils (NC’s) it was because I felt they were the best kept secret in the City of Los Angeles.

I wanted to convince all of you….and yes them… that they are important; even more relevant than ten years ago; and should be more influential in the political process.  In other words our City politicians and government agencies should respect and take NC’s opinions into consideration when acting on public policy issues.

In order to discuss their individual and cumulative effect, I needed to do the research to see what the initial expectations were, what was accomplished, and the future direction.   CityWatch Editor, Ken Draper was kind enough to supply me with the archives of all the articles about the NC’s published by CW since 2003.  He also gave me a list of sources.  It contained community leaders who were there before the official NC’s were certified. These founders helped draft the road map.

Everyone smart enough to be reading CityWatch knows the Neighborhood Council concept is not new.  Many other cities have some type of program. The Los Angeles NC system was put in place to “encourage greater public participation in the political process.”  Those words are part of the Charter.

Greg Nelson was the general manager of the Department of Neighborhood Empowerment (DONE) during the great ‘certification gold rush’.  I asked him if the NC’s had lived up to his expectations.

He thinks there is plenty room for improvement. An article he wrote for CW last December listed 111 things the NC’s should be doing by themselves, and in conjunction with City Hall.  This list should be required reading for all the new Council staff, commissioners and Neighborhood Council Boards of Directors.  You may not agree with some or even many - but it is a thoughtful approach by someone who has been there.

I needed to get some background from the volunteer side and talked with Doug Epperhart, who was the founder of Coastal San Pedro Neighborhood Council (the second NC certified by the City) and currently serves as a Commissioner on the Board of Neighborhood Councils (BONC).  When I asked him the same question he replied his expectations were on the low side and it is a mixed bag.  He has worked diligently the last decade in both his own NC and Citywide.

When asked what the number one “fix” he would institute he said that instead of 95 Neighborhood Councils there should be two or three hundred.  His reasoning was it was very difficult to engage a neighborhood of more than 6000 stakeholders.  Since we know that all politics is local, the NC’s Boards would be smaller and not so unwieldy.  More interaction with stakeholders would be possible.  They could have real discussion instead of the two minute public comment. This would ensure the Board truly represented the community and not just the opinions of the Board.

Both these gentlemen have walked the walk and talked the talk.  Their ideas are certainly worth discussing.  Hopefully we can elicit some response from you… pro and con?

I have the greatest respect for Taylor. He is another one who has devoted many hours to innovative and practical ideas both in his NC and City activities.  He feels that too many times the NC’s made demands without asking the elected officials how the NC’s could help move the official’s agenda.  Good governance is also compromise.   We know the results of being the party of “no”.

Mayor-elect Garcetti presented two “wish lists” to the Neighborhood Councils in both 2002 and 2004.  He itemized the priorities and things he expected from the NC’s.  Now that he is almost finished with the “listening tour” it would be helpful for him to give his NC wish list for 2013 and beyond.

Saturday afternoon there is a meeting of the working groups BONC entrusted with making an updated blueprint for the Neighborhood Councils.  It will be interesting to see what changes they propose. Will there be “out of the box” thinking and how much has history affected their collective mindsets?   Even though some long time NC leaders are of the opinion that -if it’s not broken don’t fix it- change is necessary.

This is an exciting time to be part of the Neighborhood Council system.  I will keep you posted (pun intended).

(Denyse Selesnick is a neighborhood council activist and serves on the board of the Tarzana Neighborhood Council.)