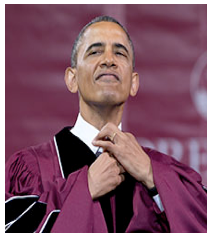 POLITICS - I’m not surprised that President Barack Obama and Attorney General Eric Holder have been waging war on the news media. They and other members of the Obama team have always struck me as elitists who don’t think really intelligent or worthwhile people would go into journalism.

That’s not an uncommon view among politicians, corporate bosses, well-paid professionals and parents who fret that their daughters and sons are choosing the low-paid and scorned media business instead of law or medical school.

These are extraordinary steps to take against journalists engaged in their daily work. A debate is now raging in the news business over whether the reporters and their sources threatened national security.

Walter Pincus, veteran national security reporter for The Washington Post, wrote that whoever told The Associated Press about a CIA operation that infiltrated al-Qaida and Rosen about North Korean plans for a nuclear test “were not whistleblowers exposing government misdeeds. They harmed national security and broke the law.”

That’s a minority view, counter to the strongly expressed opinions of a majority of journalists who believe, as I do, that the AP reporters and Rosen were engaged in legitimate newsgathering.

Many Obama fans are shocked and appalled at his administration’s relentless effort to punish the sources of these stories and to use police state methods against the reporters publishing them.

I’m not. Even though I have been an Obama booster, much to the disgust of some of Truthdig’s readers, I have long thought that the president and his staff hold the news media in low regard.

Jeremy W. Peters revealed in The New York Times in July how the Obama press office in Chicago insisted on veto power over what reporters quoted in interviews with campaign officials. “The quotations come back redacted, stripped of colorful metaphors, colloquial language and anything mildly provocative,” Peters wrote. There was some of this in Mitt Romney’s campaign too, but not with the efficiency and dedication of the Obama team.

Even those covering the campaign at the lowest grass-roots level, as I did, saw the short leash the Chicago headquarters held on, for instance, a storefront office on Crenshaw Boulevard in South Los Angeles. Nobody would talk to me there unless I cleared it with the local press secretary. Once I got permission, people were more than willing to tell me what they were doing. I’ve never encountered that sort of top down control before.

The assault on the AP and Fox News’ Rosen was so egregious that even the lapdogs of the Washington press corps have been moved to indignation. Ordinarily, they submit to Obama’s contemptuous treatment and take pleasure in his witty speeches at the White House Correspondents’ Association dinner.

Obama’s attitude, I bet, is as much cultural as it is legal.

The image of the press as something scurrilous is deeply rooted in our society. University of Southern California journalism professor Joe Saltzman, who heads USC Annenberg’s Image of the Journalist in Popular Culture program, said in an interview with a faculty colleague, blogger Henry Jenkins, “When your favorite aunt asks you why would anyone go into journalism, a profession filled with arrogant, impolite reporters who invade people’s privacy, make up stories and sensationalize the news, where is she getting her information? She probably doesn’t know any journalists, has never visited a newsroom, and has no idea how reporters work. Yet she has very specific ideas about who journalists are and how they behave. And she learned this by watching journalists in the movies and on television and reading about them in novels.”

From my years in reporting about the rich and powerful, circles Obama now travels in, I have found they feel the same as Saltzman’s mythical favorite aunt. In fact, their attitude may be stronger because of class and educational biases. This doesn’t just apply to Obama. The Ivy League and big corporations and law firms have provided many Cabinet and staff members for other administrations. Having gained privilege and wealth, they don’t understand why an intelligent, talented person would take another course.

As Saltzman said, “Surveys continue to show that most Americans want a free press that is always there to protect them from authority, from Big Business and Big Government, and give them a free flow of diverse information. But those same surveys also show that most Americans harbor a deep suspicion about the media, worrying about their perceived power, their meanness and negativism, their attacks on institutions and people, their intrusiveness and callousness, their arrogance and bias.”

Americans who feel that way might ask why a decent woman or man would go into such a business. Why would journalists try to obtain material that government officials, from the president on down, consider secret? Have they no respect for authority?

I think journalists should question authority, right from the beginning, when their first tasks are digging up hidden local police reports and crooked city hall contracts. From there, those who stick with it will go on to try to open up the secrets of the highest levels of government, an unpopular but honorable task, no matter what your aunt says.

(Bill Boyarsky is a journalist and blogs at truthdig.com where this column first appeared. Visit truthdig.org for other prominent writers like Robert Scheer, Amy Goodman and Chris Hedges.)