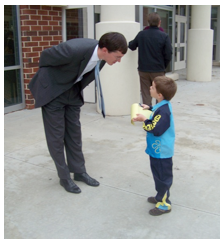 MAILANDER’S LA - If the recent Mayor's race was unsatisfying to you, or if you simply were too put off by it to care much, you might at least wonder why that was so.

Out-of-town media found our mayoral candidates as well as our mercifully completed Mayor's race largely boring.  I did not; I often found it exciting and meaningful.  But I will tell you who I did find boring in the Mayor's race mix: our local academics, who often moderated or served on debate panels alongside of journalists, who peddled information that was often wrong or suspect at best, and did so with insistence, and who even at times seemed to be running for something themselves.

I wouldn't care so much about this, but I see so many people of profound analytic political talent whose insightful observations on our elections are completely unknown, largely thanks to the print and broadcast media types who instead promote local race "analysis" from academics in para-university, government-themed political "centers."

In the most recent election cycle, the academics asserted themselves in our election process in two significant ways: they threw often suspect polls on the race together hastily, and they served as moderators and panelists at the dreadfully dull candidate debates.

Their polling was ultimately found to be hit and miss, and mostly meaningless miss.  Yet print and broadcast media constantly celebrated these polls and the people who shepherded them, even while acknowledging that the race was boring and politically disappointing.

Meaningful political polling is very difficult for an academic center to accomplish, as issues such as determining who might be a "likely voter" is an often proprietary function of real hardcore political polling.

Dan Schnur at USC's "Jesse Unruh Institute of Politics"--most all of these "institutes" are named for ancient heavies in our local political sphere--at least recognized the problem, and solved it by inviting others to solve it.  The polls he put together, which typically put Garcetti in a comfortable lead since the time of the primary, were a collaboration between two private polling companies with strong political polling divisions. You can make expertise or you can buy it, and Schnur wisely chose to buy it.  The Times/USC poll often jibed with the private internal polling of the Garcetti campaign, which never had him below a four point lead since the time of the primary, but which also kept this information quiet.

However, the poll of Raphe Sonenshein's "Pat Brown Institute of Public Affairs" at Cal State University, Los Angeles, which was conducted largely in-house, had Greuel with a slim one-point lead two weeks before the election--even if it spelled Greuel's last name wrong in its first set of too-thin crosstabs, and its political party affiliation category originally only added up to 90% rather than 100%.

And Fernando Guerra of Loyola Marymount’s “Center for the Study of Los Angeles” put together an exit poll on Election Day.  That one deserves much more scrutiny.

We still haven’t seen real meaningful crosstabs to that poll posted; for instance, we know the poll was comprised of 65% Democratic voters, 19% GOP, and 15% Others (Sonenshein’s poll somehow located more than twice as many folks as “Others”—31%—who might be “likely voters”—that number was certainly too high).  But we don’t know what percentage of Guerra's Democratic voters were early voters and what percentage were Election Day voters--a fact which should be easy to find in crosstabs but which is not available.  Nor do we know if the poll even suggests that this figure for Democrats is supposed to suggest the actual composition of the electorate, or any figure is supposed to stand as an accurate snapshot of the race.

The LMU/CSLA researchers put together a highly unusual exit poll strategy, which they called “racially stratified homogenous precinct methodology."  Yet they also said they chose "25 randomly selected and ethnically representative" precincts at which to do their polling.  It all seemed to work with regards to forecasting turnout, but I have much doubt about it.

Those doubts first centered on the word "randomly"--how do you "randomly" choose a precinct that you are choosing because of a specific certain criteria: namely, that a precinct is ethnically representative? Can I see those precincts now, please, to see how "randomly" they were indeed chosen?

And did the totals for the early votes also come from these same precincts? That seems statistically unlikely, to be able to catch people from specific precincts who have already voted, a scant week before an election.

If they weren't, of course, but they are aggregated into your "homogenous precinct" totals, well, your precincts aren't so homogenous after all, are they?

And are the respondents self-identifying, or does the poll have its own way of determining the built-in (but random!) racial "stratification"? Self-identification is a key component especially in polling Latino presence in an election.

I will say that Guerra's LMU/CSLA poll is presented in a way that indicates they had a top-flight web designer involved. But with polls, I'd rather see dingy web pages in which all is revealed, rather than handsome ones in which not much is.

As for the performance of various academics at debates, there were far too many of these for any one debate or performance to matter, so their performance in the minds of the public I'm certain remains a haze. The candidates and their obliging interrogators were brought before every possible group, and depending on the group, the candidates' performances could more closely resemble auditions than debates at times.  But through all of the debates, political science academics at local para-academic organizations were the ones most entitled to ask the candidates questions alongside journalists, and their questions were typically banal, stamping the race with a character it needn't have had in the public's eye.

While these academics from their various para-academic institutes enjoyed copious agency through the mayoral campaign, those who write exclusively online on civic matters were not invited to sit on a single panel of any of the fifty debates.  The city's many bloggers, who may know the city and its politics best of all, were invited to participate in none of these forums, even as academics often turned to high school students to address the candidates towards a debates end, imagining this made the debates more participatory and democratic.

As a consequence to all this academic usurpation of seats that might more rightly belong to real civic voices, Eric Garcetti was never asked about the cancellation of Sunset Junction Street Fair.  Wendy Greuel was never asked about the long declining state of Foothill Boulevard in her old district.  Despite the city's profound homeless population and ever escalating rentals, we never heard either of the candidates seriously challenged on affordable housing policy.

Guerra at Loyola, also known as a Latino-issues specialist, was once on the City's lobbyist register.  Sonenshein tinkered with Mayor Riordan's charter reform adaptations.  Schnur was once a Republican communications specialist. None of these people have stood apart from the Office of the Mayor or any other local political office with anything resembling dispassionate academic distance.

In LA's fractured local media world, where every market is a niche market, academics are increasingly competing for the same spaces in publications that actual writers and pundits are. And media entities such as local TV affiliates and the Los Angeles Times are rewarding them. Insecure editors who feel they can't go wrong with an academic extend them favor that often extends far beyond their real expertise. Producers can dependably find a gab-ready, studiously boring academic between nine a.m. and three p.m. when so many local civic shows are broadcast or taped.

And we see the results: record lows at "the only poll that matters," the one on Election Day.  There are four million people in Los Angeles and by the time all the votes are counted we will be lucky to find that a tenth of them voted for a Mayor. Mayor Garcetti's vote total would not have gotten him elected in any election since 1949.

I don't understand why local academic institutions are trying to gain so much agency in the selection process of a Mayor anyway.  If they hope to perform a civic kind public service, a greater service could be provided by conducting meaningful studies about affordable housing, transit hub development, the effects of gerrymandering, &c. And they should be invited to try their luck by vetting them in media, along with the rest of us.