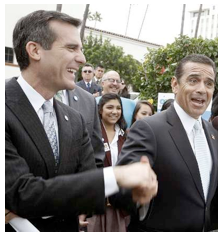 MEMO TO OUR NEWLY ELECTED - First, congratulations are in order to those who won last Tuesday.

Second, good luck to those who did not win last Tuesday's elections.  Third--and most importantly--this was a low voter turnout for a variety of reasons and with considerable implications for the immediate and long-term future.

The homeowners, community leaders and civic activists who are active with their Neighborhood Councils and homeowner/neighborhood associations!!!

These individuals (like those of us "nerds" who write for CityWatch) don't get paid for our trouble and time spent from our jobs and families, and are praying and fighting (at the cost of sleep, greater income, and family life) against all odds that the time, energy and even personal funds used to fight for a better Los Angeles will make a difference.

On the other hand, the "unholy alliance" of developers, lobbyists, trade unions, public sector unions and chambers of commerce truly get PAID to work behind the scenes when those of us with families and jobs can't hang out at City Hall and deluge our electeds with private meetings and campaign funds during the day to pursue policies that will enrich themselves at the expense of the overwhelming majority of taxpaying Angelenos.

So, again my congratulations to Mayor-Elect Garcetti, City Controller-Elect Galperin and City Attorney-Elect Feuer.  You were voted in, and potentially will again be voted in four years from now, by a more principled, civic-minded, homeowner-dominated electorate that demands INCLUSION into the currently top-down City government that is Los Angeles.

This isn't a Republican/Democratic thing--tyranny and lack of inclusion isn't partisan, and the powerful forces that have dominated and virtually bankrupted the City of Los Angeles, and which have disgusted and turned off Angelenos from their City government, is what killed the chances of Wendy Greuel to be Mayor and Dennis Zine to be City Controller.

(Trutanich's antics were his own undoing, but it is to be reminded that he once was elected as a man of the people, and his decision to break from his promises killed his credibility...something that Eric Garcetti and Mike Feuer and Ron Galperin would do well to consider.)=

Right now, despite the overall favorability of our Mayor, it would do well for our new electeds to really think about where all the state-elected pols (including Villaraigosa and Wesson) have left our City.  Yes, we have new state-elected pols entering City government, but they have to remember that HERE we have Neighborhood Councils.  Sacramento is VERY top-down, but it's not supposed to be that way in the City of the Angels.

So here are my A-B-C's of how those who have left from, and those who perhaps wish to go into, state government should take advantage of all those "little people" in the Neighborhood Councils to fix our economic governments and (more and most importantly) restore the faith of the average Angeleno in City government).

Have more evening meetings, and perhaps sleep in a few extra mornings while working later into the evening.  They do this in Culver City and Santa Monica, where committees and City Council meetings don't force "working people" to make the same miserable choice about attending City of L.A. meetings that they do with Jury Duty.  Choosing between jobs/putting food on the table/driving children to school and going to City Hall is unfair.

(Having a Westside and other regional City Halls for local meetings wouldn't hurt, either.)

And by "working people" I mean those with private as well as public sector jobs, be they union or non-union.  This disgusting term of "working people" was used by Wendy Greuel for overpaid DWP workers but without consideration for those of us, be we blue-collar or professional, who have to shell out the big bucks for their unsustainable salaries and benefits.

B: Bring Neighborhood Councils and their representatives to the bargaining table.

City finances involve public funds, and taxpayer funds, and property tax and sales tax and...well, you get the idea.  The whole concept of having private negotiations, secreted from the rest of us mere mortals, between public sector unions and elected officials (who almost always have to curry these unions' favor to be elected or re-elected) only proves those who oppose the existence of public sector unions were and are RIGHT.

Having public sector unions (whose leaders really are shafting their membership, particularly the younger members) suck up all the oxygen in the room during these private negotiations is just WRONG.  Having ALL meetings that discuss public funds be required to have Neighborhood Council representatives attend can do two things:

2) It will be much, much harder for Neighborhood Councils to reject the need for more revenue raising and grassroots/volunteer services to perform City services and initiatives after public sector givebacks and efficiencies are demonstrated.  Sooner or later, we WILL have to raise revenues to fix our infrastructure--and Neighborhood Council leaders must be part of that process.

Garcetti, Galperin, Feuer and the new City Council can all benefit from this approach.

C: Casden/Sepulveda--Find out what infuriates transit advocates and community activists about this, and fix this problem, which is reflective of all the tone-deafness and downright corruption that is going on from Planning...and all the political powers that have allowed this project to go as far as it has.

This project, so huge and car-oriented and inappropriate for this transit-adjacent location, zipped through Planning and the CPC in a manner that will virtually kill Westside desire for road and rail improvements and expansions in Los Angeles.  It's corrupt, involves violating environmental, CEQA and Brown Act laws that should appall anyone. and (along with the Hollywood Millennium Project) iconic of what is wrong with the way our City does business.

Outgoing City Attorney Carmen Trutanich and his deputies, Jane Usher and William Carter, have recommended this Casden/Sepulveda travesty go back to Planning, and transit-friendly incoming City Attorney Mike Feuer needs to follow suit.  It's illegal, stinks of a lack of transit planning, proper urban planning, and obeying the law with respect to Community Plans.

Kiss any future Measure J's or road repair bond measures good-bye if this goes through, unless of course you think you can do these measures without Westside support.  Other developers will follow Casden's lead (with all the electioneering/money laundering and influence he has done to date and for many years) if this illegal travesty goes through.

Garcetti, Feuer and Galperin were brought in by the people, the voters, the neighborhood volunteers...so let's hope they can use us for their fiscal, political and even moral advancement.  We can do this, and we can have leaders who don't view voters and volunteers as "little people" to be exploited.

(Ken Alpern is a Westside Village Zone Director and Boardmember of the Mar Vista Community Council (MVCC), previously co-chaired its Planning and Outreach Committees, and currently is Co-Chair of its MVCC Transportation/Infrastructure Committee. He is co-chair of the CD11 Transportation Advisory Committee and chairs the nonprofit Transit Coalition, and can be reached at [email protected]  He also co-chairs the grassroots Friends of the Green Line at www.fogl.us. The views expressed in this article are solely those of Mr. Alpern.)