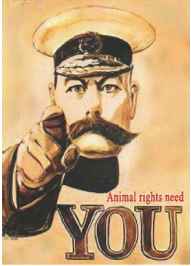 ANIMAL RIGHTS - Standing outside a slaughterhouse in Draper City, Utah, Amy Meyer was horrified by what she saw.

Cows struggled to stay out of the plant and employees hauled one cow that appeared sick or injured in a tractor. While standing on public property, Meyer pulled out her cell phone to document the scene. And…she got arrested.

Big Ag has found a clever new way to keep the public from seeing footage or photographs of animal cruelty. In six states (Iowa, Kansas, Missouri, Montana, North Dakota, and Utah), Big Ag lobbyists succeeded in making filming or photographing agricultural operations illegal. Similar measures are in the pipeline in other states, although Governor Bill Haslam just vetoed one in Tennessee.

Meyer was the first to be arrested under one of these so-called “ag-gag” laws. After much public outcry, the authorities dropped all charges against her. But the case raises a fundamental question about our food system: Do we have a right to know how our food is produced?

Big Ag likes to claim that farming is messy and bloody and that when we consumers, uneducated in farm ways, see the grim realities of farming, we won’t understand it. “Why are you killing Wilbur?” we cry, completely forgetting that there’s no way to produce the bacon we ate for breakfast without killing a pig. Show us a photo of a slaughterhouse and we’ll renounce meat on the spot.

And yes, some people do feel that way. A whopping 3.2 percent of Americans are vegetarians. The prevailing majority of us eat meat. In fact, our culture celebrates Temple Grandin — portrayed by Claire Danes in an HBO movie — for designing more humane slaughterhouses. On the whole, Americans aren’t offended by the simple, unavoidable realities of farming.

Animal abuse isn’t the only issue at stake – so is food safety. Remember that horrible video of slaughterhouse employees kicking sick cows, prodding them with forklifts, and even applying electric shocks? The cows were too sick to go into the human food supply — they represented a risk of mad cow disease — and the heinous acts in the video were done by employees trying to make the cows stand up long enough to pass their USDA inspection. Want a burger?

Big Ag’s other favorite claim, any time footage of tormented animals makes the news, is that “a few bad apples” are to blame for the abuse.

Like when HBO showed footage of hog farm employees euthanizing sows by hanging them from chains. The Center for Food Integrity,  an industry-funded front group, came out saying, “The actions of a few ‘bad actors’ in no way reflect the high standards demonstrated daily by a vast majority of America’s dairy farmers.”

But that’s not what an undercover investigator found. Identifying himself only by a pseudonym – Pete — he described his work taking jobs around the country on farms, ranches, and slaughterhouses, documenting what he finds. “Every single facility… that I’ve worked at has been breaking the law,” he told Democracy Now! That doesn’t sound like “a few bad apples.”

Clearly, agribusiness doesn’t want activists documenting animal cruelty at factory farms and slaughterhouses. Here’s an easy way to make sure they don’t: Don’t abuse animals. If your workers and facilities follow the law, then no one can document law-breaking practices on the premises.

On the flipside, if farms and slaughterhouses are guilty of repulsive and sadistic abuses, why should we pass laws to help them hide it? As Supreme Court Justice Louis Brandeis famously said, “Sunlight is the best disinfectant.” The more Americans know about how our food is produced, the more producers will change their ways to match the wishes of the American people.

(Columnist Jill Richardson is the author of Recipe for America: Why Our Food System Is Broken and What We Can Do to Fix It. This column was provided CityWatch by OtherWords.org) Animal Rights Art/Flickr