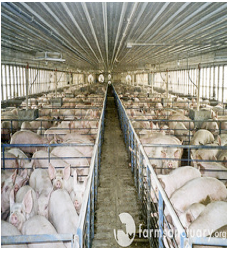 ANIMAL RIGHTS - Big Ag's eager to keep us all in the dark about what they're doing to the pigs, cows, and chickens under their care.

Amy Meyer was curious. Then she was appalled. Then she was charged with the “crime” of using a cell phone to video what appalled her.

Welcome to the Brave New World of “ag-gag” laws being pushed by agribusiness corporations to stop reporters, workers, animal rights advocates, and even curious 25-year-old truth-seekers like Meyer from recording abuses that are routinely taking place on factory farms.

Actually, these are the repressive laws of the cowardly new world of industrial agriculture. Big Ag’s eager to keep us all in the dark about what they’re doing to the pigs, cows, and chickens under their care.

A resident of Utah, which passed a gag law last year, Meyer had heard about some ugly doings at the Smith & Sons Meat Packing outfit in the town of Draper City. She decided to take a look.

Even from the public roadway where she stood the horror was easy to see. Then she dared to document it with her camera. The corporate manager scrambled out to declare that she was trespassing, later claiming she’d crossed a barbed-wire fence onto corporate property.

Cops were called, no such trespass was found, and she was released. But the corporation, whose owner just happens to be mayor of Draper, got city prosecutors to charge her with — get ready for it — “agricultural operation interference.” This strangely worded infraction is punishable by a six-month jail term.

However, global public outrage poured into Draper City — thanks to Will Potter, author of the GreenIsTheNewRed.com [[hotlink]]  blog. Within 24 hours, prosecutors dropped all charges against Meyer — the first person in America to be charged under these ridiculous laws.

Because of the courage of people like Meyer, Potter, and thousands of freedom defenders, Big Ag is choking on its own ag-gag scam. To help fight this corporate repression go to change.org/AgGag.

(Jim Hightower is a national radio commentator, writer, public speaker, and author of the book, Swim Against The Current: Even A Dead Fish Can Go With The Flow, Jim Hightower has spent three decades battling the Powers That Be on behalf of the Powers That Ought To Be - consumers, working families, environmentalists, small businesses, and just-plain-folks. This column was provided CityWatch by OtherWords.org)