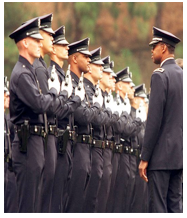 GUEST WORDS - There is no "magic number" for how many LAPD officers it takes to keep Los Angeles safe. Yet, the number 10,000 keeps popping up as a central issue in the city's never-ending budget debate. The dilemma posed by some city leaders is that Los Angeles is boxed in, forced to decide between funding police or parks, squad cars or street repair. But it's a false choice, and it obscures the real issue which is the urgent need to fully prioritize essential city services and develop a long-term funding plan that finally addresses unsustainable employee costs.

When I was president of the Los Angeles Police Commission in 2001, it was far different moment in our city's history. LAPD was facing record attrition rates for officers and struggling to attract new recruits. Public confidence teetered near an all-time low as the department struggled to implement a federal reform consent decree and dealt with the aftermaths of the Rampart scandal and the 1992 civil unrest.

In 12 short years violent crime and murder rates have plummeted a whopping 50 percent and property crimes have slid by more than a quarter. Los Angeles hasn't been this safe since Joe Friday wore a badge in the 1950s.

There's a number of reasons for the drop in crime rates: The groundbreaking leadership of former Chief William Bratton and the innovative course set by current Chief Charlie Beck have brought LAPD into the 21st Century. LAPD's COMSTAT program is using real-time statistics to targets crime fighting resources more effectively and efficiently. And, rank and file officers are on the streets every day working ever-closer with the community and becoming integral parts of the neighborhoods they serve.

External factors should not be overlooked. The crack-cocaine epidemic is waning from its apex in the 1980s. Gang violence dropped due in large part to successful court injunctions and interventions.

Public school reforms continue to take hold slowly turning schools that were once gang factories into houses of hope and real places of learning. These same trends are echoed in cities across the nation.

Despite the progress, one constant remains -- Angelenos rank public safety as Job #1. That priority is not tied to any number, like 10,000 officers. Rather, it's rests on whether the LAPD has the resources necessary to effectively keep our neighborhoods safe. Period.

10,000 officers certainly has a nice ring to it for political ads. But, it's also not that far off the mark from what is needed to effectively patrol the nation's most sprawling big city. After all, as the LA Times pointed out earlier this week, we still rank 15th out of major cities in the number of officers per 1,000 residents.

This week, the Los Angeles City Council began debating next year's city budget. Front and center is how to adequately fund the city's most essential city services - police, fire, libraries, parks, public works, and infrastructure. And there isn't much savings to be found by cutting remaining programs or services.

More than 90 percent of the city's budget is consumed by employee costs including salaries, health care, and pensions. Pension costs are projected to top $1.3 billion per year by 2016 -- more than the entire annual budget of LAPD. But pensions don't show up on any Angelenos list of "essential city services." Same with the nearly 40 percent salary increases that most city employees have received since 2002. What's more, Angelenos continue to pay 100 percent of health care premiums for most city employees.

It is time to move beyond what is the right number of officers and, instead, focus on what's right for the future of Los Angeles. Developing a long-term plan for how to fund all of the city's core services -- especially LAPD -- should be right at the top.

To get there, everything needs to be on the table.

City Hall should forgo this year's scheduled pay raises. Every city employee, including police and fire, should contribute towards a portion of their health insurance premiums. LAPD staffing and overtime rules should be evaluated to determine the most cost-effective model that in turn keeps our streets safe. And, the next mayor should be adamant about working with the City Council to finally determine and fund only the most essential core services.

With real reform, there is no need to retreat from a robust police force. Success does not mean we should take our foot off the gas. Succeed and then change course? Ridiculous. Great cities face their challenges head-on and invent new paths towards the future. There are at least 10,000 reasons for Los Angeles to do the same.

(Rick J. Caruso is the founder & CEO of Caruso Affiliated, and served on the Los Angeles Police Commission from 2001-2005, Commission President from 2001-2003. He can be reached at:  www.twitter.com/@rickcarusola )