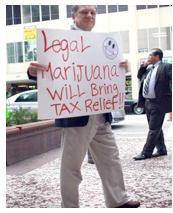 POT PROHIBITION HAS RUN ITS COURSE - It is time for California to decriminalize, tax and regulate marijuana and decide who sells it,

who can buy it legally, and for how much. When California became the first state to approve medical marijuana, we led the nation on progressive drug policies, and now it is time to lead again.

Bolstered by growing public support and building on our initial leadership, Californians must renew our push for common-sense marijuana policy by developing a state level regulatory system and lead the national effort to end draconian laws that favor incarceration over education.

In California, San Francisco has taken the lead in reforming ineffective drug laws and changing the conversation around substance use. Medical marijuana laws, marijuana decriminalization, and the efforts to reduce the state's prison population make us a strong voice for change. But it is not enough. We stand at a time where science and common sense must trump age-old fear and propaganda.

San Francisco pioneered and advanced innovative programs to reduce the harms of substance misuse by using alternative adjudicative action, using drug and community courts as an alternative to the traditional criminal court system and sentencing. It involved connecting people to treatment and mental health services, housing and resources for education and training. San Francisco has invested significant local tax dollars in providing substance treatment to those who need it, but San Francisco is just one city -- and it is not enough.

I am not advocating for the use of marijuana, but the current laws are stigmatizing and criminalizing millions of Americans young and old. The war on drugs has become a war on society and we can and must do better.

In the November 2012 general election, Colorado and Washington became the first states to decriminalize possession and growth of small amounts of marijuana and create a system for taxing and regulating the product for adults over 21. California needs to do the same. Even organizations such as the California Medical Association recognize taxation and regulation as a preferred policy for controlling marijuana.

Marijuana prohibition has caused irreparable harm to millions of people by saddling them with criminal records and the collateral sanctions associated with even marijuana misdemeanors, such as the potential loss of employment, housing, financial aid and child custody. These sanctions and penalties fall disproportionally on African Americans and Latinos, devastating entire communities for generations.

Changing marijuana laws is one important part of shifting the drug policy paradigm from a criminal framework to one of public health. But it is not enough. Decriminalizing marijuana alone will not solve America's problem with mass incarceration.

Forty-two years and $1 trillion later, we recognize the "War on Drugs" has not only failed but also created inter-generational social problems that will likely take as long to solve. There is no reason why California cannot set the example for the nation in responding to drugs in a rational and sensible way. It is time to be bold enough to consider the science and the examples set forth by other states and nations.

The time has come to decriminalize, tax and regulate marijuana -- anything less is not enough.

(Gavin Newsom is the lieutenant governor of California and a former mayor of San Francisco. He recently authored "Citizenville: How to Take the Town Square Digital and Reinvent Government." Newsom blogs at HuffingtonPost.com where this article was first posted.)