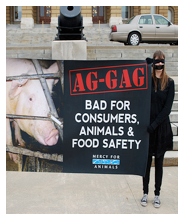 ANIMAL RIGHTS - In most state legislatures today, "off the wall" has become the political center, and bizarre bills are no longer unusual.

Still, it seems strange that legislators in so many states — including Arkansas, California, Florida, Indiana, Missouri, Ohio and Vermont — have simultaneously been pushing "ag-gag" bills that are not merely outrageous, but downright un-American. Each is intended to quash free speech by banning journalists, whistleblowers, workers and other citizens from exposing illegal, abusive or unethical treatment of animals that are incarcerated in the factory feeding operations of huge corporations.

Our nation's founders mounted a revolution to establish our free-press and free-speech rights, enshrining them in the First Amendment to ensure the free exchange of ideas — even when the Powers That Be didn't like the message that such freedoms produce. In fact, the Founders knew from hard experience that the protection of those freedoms was especially essential when the Powers That Be have something they're eager to hide from the citizenry.

Yet here comes a mess of so-called "conservatives" attempting to use state government to outlaw messengers who shine a light on corporate wrongdoing — turning those who expose crimes into criminals. Even kookier, these repressive laws declare that truth-tellers who so much as annoy or embarrass the corporate owner of the animal factory are guilty of "an act of terrorism."

The freedom-busting terrorists in this fight are not those who reveal the abuse, but the soulless factory-farm profiteers in the corporate suites and the cynical lawmakers who serve them.

Oddly, each of these state proposals is practically identical, even including much of the same wording. That's because, unbeknownst to the public and other legislators, the bills don't originate from the state lawmakers who introduce them. Instead, they come from a Washington-based corporate front group named ALEC — the American Legislative Exchange Council.

This infamous "bill mill" periodically convenes its corporate funders to write model bills that serve their special interests. Then ALEC farms out bills to its trusted cadre of state lawmakers across the country, who introduce them as their own, not mentioning the corporate powers behind them.

The secretive ALEC network produced the model ag-gag bill in 2002 and began shipping it from state to state under the ominous tile, "Animal and Ecological Terrorism Act."

The freedom-busting terrorists in this fight are not those who reveal the abuse, but the soulless factory-farm profiteers in the corporate suites and the cynical lawmakers who serve them.

Actually, factory farms are not farms at all. They are corporate-run concentration camps for pigs, cows, chickens, turkeys and other food animals.

Factory farms are not farms at all. They are corporate-run concentration camps for pigs, cows, chickens, turkeys and other food animals.

Held in corporate confinement, these creatures of nature are denied any contact with their natural world, instead being crammed by the thousands into concrete-and-metal buildings, where they are locked in torturously tiny cages for the duration of their so-called "life" — which is nasty, brutish and short. All this merely so food giants like Tyson Foods, Smithfield and Borden can grab fatter and quicker profits. Their abusive industrial system is so disgusting that America's consumers would gag at the sight of it.

That's why they're desperate to keep you from knowing what goes on inside. Nonetheless, word has been getting out, as animal rights advocates, consumer groups, reporters, unions and others have exposed some of the realities of animal confinement to the public, including showing wretch-inducing photos and videos.

Rather than cleaning up their act, however, the industrial food powers have simply doubled down on disgusting by getting industry-funded state legislators to go after anyone who reveals their ugly secrets.

Their attack on whistleblowers will gag you almost as badly as viewing the gross animal abuse. But, really, who do they think they're fooling? If they have to pass a law that says, "Don't look here," people will naturally wonder what they're hiding — and will demand to see it and change it. Six states have passed ag-gag laws, and six more are presently moving toward passage.

To see what your legislature is doing — and to join the fight to stop factory farming everywhere — go to humanesociety.org.

(Jim Hightower is a national radio commentator, writer, public speaker, and author of the book, Swim Against The Current: Even A Dead Fish Can Go With The Flow, Jim Hightower has spent three decades battling the Powers That Be on behalf of the Powers That Ought To Be - consumers, working families, environmentalists, small businesses, and just-plain-folks. This column was posted first at creators.com)