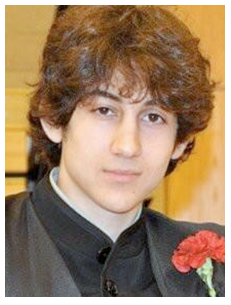 JUSTICE - “We’ll give him a fair trial, then we’ll hang him,” an apocryphal admonition believed to derive from the days of frontier justice and that has since been reprised in movies, television Westerns and op-ed columns advises.

Now that we have Boston Marathon bombing suspect Dzhokhar Tsarnaev in custody, the country is ready to follow that old advice and give the accused a trial. We’re just not certain about the “fair” part.

Even as the 19-year-old Tsarnaev remains in a Boston-area hospital unable to speak because of a wound to his throat, the uncertainty has been expressed largely on two fronts: whether to read Tsarnaev his Miranda rights, and whether to charge him—or at least temporarily hold and treat him—as an “enemy combatant” subject to the Military Commissions Act.

At the early stages, President Obama and the Department of Justice announced their intention to delay giving Tsarnaev his Miranda rights while a chorus of influential Republicans, including Sens. John McCain of Arizona, Lindsey Graham of South Carolina and Kelly Ayotte of New Hampshire, and Rep. Peter King of New York, have called for Tsarnaev to be tried before a military tribunal like the detainees imprisoned at Guantanamo.

Although understandable in the heat of the moment after the deadly attacks, neither stratagem is necessary from a legal or practical perspective. Moreover, both threaten to further erode American civil liberties and revive the climate of post-9/11 hysteria.

Authorities justified the decision not to Mirandize Tsarnaev under the “public safety” exception to the rule. First recognized by the Supreme Court in the 1984 case New York v. Quarles, the exception was designed to permit police to engage in limited and focused questioning of suspects before reciting Miranda warnings as a safeguard against immediate threats to public safety.

Just how immediate the threats had to be before the exception applied is apparent from the facts of the Quarles case itself, in which police officers confronted the defendant, an alleged rapist, in a supermarket where they discovered upon frisking him that he was wearing an empty shoulder holster.

Under the circumstances, the Supreme Court held, police were justified in asking Quarles at the scene of his arrest where his gun was before reading him his rights.

The war on terror, however, has brought about a broad expansion of the public safety exception. In March 2011, The New York Times disclosed the existence of an internal FBI memo that not only reminded agents involved in the interrogation of terrorism suspects about the public safety exception, but went on to instruct that “[t]here may be exceptional cases in which, although all relevant public safety questions have been asked, agents nonetheless conclude that continued unwarned interrogation is necessary to collect valuable and timely intelligence not related to any immediate threat … ”

Despite the length of time Tsarnaev has been in custody and despite Massachusetts Gov. Deval Patrick’s assurances that there is “no basis for concern about another imminent threat,” a special FBI interrogation unit reportedly began questioning Tsarnaev in writing without Miranda warnings after he regained consciousness Sunday evening.

No matter how bold the decision to steam ahead under the public safety exception may seem, it could prove to be a costly mistake for both the prosecution of Tsarnaev and the long-term interests of the criminal justice system and the country as a whole. The DOJ’s expansion of the public safety exception is an invention of the executive branch crafted without judicial oversight or review. As applied to Tsarnaev, the exception would create the unnecessary risk of an appellate court reversing an eventual conviction because of a Miranda violation.

Invoking the exception so long after Tsarnaev’s arrest will also exacerbate popular misconceptions about the social costs of the Miranda rule and promote the dangerous idea that constitutional rights can and should be sacrificed or curtailed whenever the state deems necessary.

Long criticized by law-and-order hard-liners for hindering criminal prosecutions, the Miranda rule in practice has proven to have little, if any, actual adverse impact. Notwithstanding Miranda, three out of every four arrested suspects agree to speak with police, with a reported range of 50 to 75 percent issuing confessions of guilt. Even more important, according to NYU Law professor Stephen Schulhofer, the net effect on the overall conviction rate of excluding statements obtained in violation of Miranda has been negligible.

The Miranda rule is aimed at striking a balance between the need for efficient law enforcement and the need to prevent abuses in interrogation. In view of the wealth of video and forensic evidence that will no doubt be marshaled against Tsarnaev, there is no reason to upset that balance.

Nor is there any good reason to test the limits of due process by subjecting Tsarnaev, a naturalized US citizen, to what would be an unprecedented trial before a military commission rather than a civilian court. Since 9/11, 90 percent of terrorism cases tried in federal courts have resulted in convictions. In New York’s federal courts, the conviction rate is 100 percent.

The Obama administration so far has resisted the call for a military commission to try Tsarnaev as an enemy combatant, opting instead to proceed against him for the bombing fatalities in federal court on terrorism charges, which carry the potential of the death penalty. In Massachusetts, where capital punishment has been abolished, Tsarnaev may also face murder charges in the shooting death of an MIT security officer. Even if he avoids execution, Tsarnaev will never be freed.

In the coming weeks and months, the administration’s handling of the case and the fairness with which it operates will be closely watched by the nation and the world. And that’s how it should be, with the proceedings conducted in a public trial in a civilian court, rather than before a military commission cloaked in secrecy, as far too much official policy since 9/11 has been.