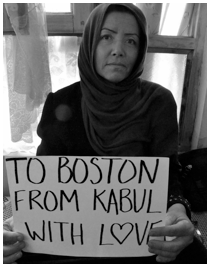 FIRST PERSON PERSPECTIVE - I've had an eerie, sad sense of having fallen down a rabbit hole this week.

Nearly two months ago, I left Boston for Afghanistan -- my fourth trip here to film documentaries, and the one that caused me the most trepidation. Afghanistan this spring is a place of unease, pervaded by the grim fear that yet another decade of war and upheaval may still not yield freedom from oppression.

As an American filmmaker and journalist, it is impossible to tune out the edgy, worried vibe in the country right now. That feeling of being on edge was amplified last week when I woke up to frantic emails and texts from home after the worst insurgent attack in Afghanistan in over a decade. "Yes, I'm fine. Safe," I wrote to family and friends.

But on Tuesday, everything changed. I woke up to a message from my husband, assuring me that he and our 5-year-old daughter were fine. Safe. Wasn't that a given? While I was sleeping, my city and one of its best-loved traditions were violated. Boston was attacked. The finish line I have proudly, joyfully crossed myself became the scene of an unthinkable crime. I am 6500 miles away, in a war zone, and the people I love were experiencing a terrorist attack.

Almost immediately, speculation began as to who was responsible for this atrocity. A lone "wolf"? Al Qaeda? Someone from Afghanistan? With today's news of the manhunt through Boston-area streets for two Chechyn brothers, I texted employees to please stay home. Here, in this war-torn country, I stay glued to CNN, BBC and Al-Jazeera (stations covering nothing but the Boston manhunt), and am reminded that the people I meet here, just like my neighbors and friends at home, wish for peace -- not just for themselves, but for everyone.

This week, I visited my friend Sahera, a woman I first met in 2006 while filming Beyond Belief. She is an Afghan widow who has never attended school, and who can't read or write. She is nevertheless wise, serene, and eloquent. In another life, she would have been a poet. It was comforting to spend time with her.

The people of Kabul have lived with the reality of bombings and violence for so long, many don't even remember a time of peace. But Sahera still imagines it, longs for it, and holds hope for a peaceful life one day for her children. She wanted me to know, and wants the people of Boston to know, that she feels our sorrow, and she sends her love from Kabul.

This is her message to all of us:

We are all creatures of God. It is my feeling as a human being. My feeling for humanity, because we also suffer a lot in Afghanistan. We see these things happening all the time. And this was my personal feeling -- I became very sad when I heard the news on TV. Also, my kids, my whole family, became very sad. These people just went to see the running, and this is what happened.

“As we've passed more than three decades of war, I understand this feeling very well.
I know the pain of this ...

“Most Afghans don't want people killed anywhere in the world... Whoever does things like this, he can never be considered a human. He is worse than a wild animal, because these are actions without mercy... We witness this in Afghanistan. There is no mercy for our children, our women, or our elderly.

“We are very sad for them [Bostonians] because they are not used to this. They're living somewhere where it's peaceful, and this event will shake them. I don't want any human being to suffer such sadness... We want to express our condolences and our sympathy to the people of Boston and the United States.”

(Beth Murphy is an award-winning documentary filmmaker and the founder of Boston-based Principle Pictures. This account was posted first at HuffingtonPost.com)  Photo credits: Sahera's photo is part of the "To Boston. From Kabul. With Love." photo series. [[    ]]