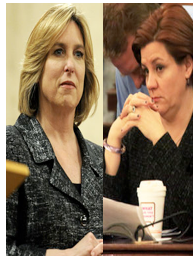 POLITICS - Los Angeles and New York City hold elections this year, and both could elect their first female mayors. In Los Angeles, Wendy Gruel faces Eric Garcetti in a May 21 runoff, and City Council speaker Christine Quinn is ahead in early polls for New York City’s fall 2013 race (Quinn would also be the city’s first openly gay mayor).

But as sometimes occurs when a demographic group seeks a political milestone, neither candidate is the choice of most progressives. Both are strongly backed by real estate interests, and Quinn is strongly identified with her longtime ally Mayor Bloomberg, hardly a progressive favorite. Will voters in these overwhelmingly Democratic cities back a moderate woman over a more progressive male? Here is our analysis.

When Barack Obama challenged Hilary Clinton for the 2008 Democratic presidential nomination, many longtime feminists were outraged that so many progressives backed the Illinois Senator. 2008 was said to be “Hilary’s turn,” and resentment against male progressive Obama backers continued until the convention.

But Obama’s challenge also represented a demographic milestone, which enabled progressives to justify opposing the chance for the nation’s first female president. The Los Angeles and New York City races do not have this dynamic, raising the question as to whether Gruel and Quinn can win voters whose policy positions are closer to their male rivals.

The Los Angeles March 5 general election had only a 21% turnout, which makes polling for the May 21 runoff more difficult. But while the May turnout is less predictable than federal or state elections, everything I have read about this race has Gruel facing an uphill battle.

I am unaware of polls asking whether voters care about electing Los Angeles’ first female mayor. Since Garcetti is promoting himself as the next Latino mayor ("I have an Italian last name, and I'm half Mexican and half Jewish"), the impact of demographics may be reduced.

If Gruel wins an upset victory, it will not be due to the city’s zeal to elect its first woman mayor.

If you are unfamiliar with Quinn, I suggest you read the March 26, 2013 New York Times story (“Offstage, A Top Mayoral Hopeful in New York Lets Her Fury Fly”) on how she does business. It describes how “friends and colleagues” portray Quinn as “controlling, temperamental and surprisingly volatile, with a habit of hair-trigger eruptions of unchecked, face-to-face wrath.”

Those are her friends talking, not her enemies or political adversaries.

One reason Quinn is favored to become New York City’s next mayor is the nearly unlimited real estate money that will be spent on her behalf (most through independent campaigns). Her chief rivals, Public Advocate Bill de Blasio and Comptroller John Liu, are far more progressive and NYC’s big moneyed interests will spend whatever is necessary to defeat them.

Feminist icon Gloria Steinem recently announced that she would not back Quinn unless the City Council speaker supported a paid sick leave bill she had long opposed. Quinn decided to back a weaker version of the measure last week, but Steinem, while thanking Quinn, also noted how “the 1%” had blocked action on this vital social justice issue.

Liu might have become NYC’s first Chinese-American mayor, but cannot seem to escape a campaign donation scandal that is derailing his campaign.de Blasio is far and away the best progressive choice, but is likely too much of an “outsider” to overcome Quinn’s advantages.

Quinn does not see her “being pushy, bitchy or tough” as a bad thing, and those supporting her (as well as her detractors) will get exactly what they expect once she takes office.

After Quinn takes office and proves too volatile for the mayor’s job, expect national Republicans to define her as a warning sign for what the nation would get under President Hilary Clinton. Despite Clinton having far greater political skills and little in common with Quinn, the NYC mayor’s performance will have talk radio promoting the type of sexist assumptions about female political leaders that Quinn’s election was supposed to dispel.

(Randy Shaw is Editor of BeyondChron where this column was first posted. He discusses the Giuliani-Dinkins NYC mayor’s races in The Activist’s Handbook.    BeyondChron.org)