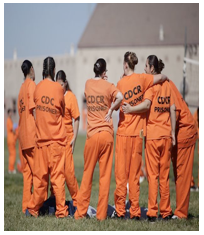 PROGRESSIVE VOICES - As California grapples with a prison system so broken that the U.S. Supreme Court has mandated reductions in the number of prisoners it holds,

the three-part “Smart Justice: Rethinking Public Safety in California” discussion begun this past week at the University of Southern California is examining both consequences and possible solutions to the state’s mass incarceration mess.

Moderated by Tomás Rivera Policy Institute director Roberto Suro, the first session—titled “California’s Corrections Systems and the Lives They Impact” and organized by Californians for Safety and Justice and USC’s Students Talk Back program—featured presentations by James Austin, president of the JFA Institute and author of a ground-breaking report on reducing prison populations, Susan Burton, former inmate and founder of A New Way of Life Reentry Program, and USC graduate students Emily Reisner and Jennifer Moore.

A New Way of Life-“Each time I got out of prison, I was dropped off downtown with no ID, no Social Security card, $200 in my pocket—and no place to go,” said Burton, who began her women’s re-entry program in 1998 after four stints in California prisons resulting from crack cocaine addiction propelled by her son’s death at the hands of a policeman.

“Every time I left prison, I vowed to get my life back on track, but failed,” Burton has written. “I did not know the tremendous odds against me.” Eventually, with help from a friend, she got set on a better path at the Clare Foundation in Santa Monica.

“I wondered why weren’t there resources in South Los Angeles like there were in Santa Monica where I got treatment?” she said this past Wednesday. “70 percent of the prison population have substance abuse problems and yet the best we can do is lock them in cages.”

Since starting New Way of Life with first one house and then others, 600 women have gone through Burton’s program. 150 have been reunited with their families, but hundreds have been denied reunification. Burton says she gets 20 letters a month from women who hope to come to New Way of

Life once they are paroled, far more than her homes can hold.

“It’s really horrible what women in prison and their families have to go through,” Burton said, citing the story of Rozelle, who had dreamed for years in prison of the day she could vote in an election.

“Her boyfriend threw her 2-year-old son against the wall and she shot him,” Burton said. “And by the time she was released from prison, she couldn’t see that son because he had his own life sentence.”

Rozelle ultimately died of cancer, still on parole, before she could ever see her son as an adult or fulfill her dream of voting.

“It’s hard to watch the horrible situations driving life out of our communities, driving hope out, driving dreams out,” Burton observed.

How to Reduce California’s Prison Population

“We can solve our prison problems by making punishment commensurate with the crimes, as we did for many years,” said James Austin, referring to the large number of inmates in California and across the country incarcerated as part of the War on Drugs for relatively minor drug possession and trafficking infractions.

As a common sense example, Austin cited the 25,000 lifers in California who could be paroled, but aren’t. “Most are very low risk.”

But in 1988, California transferred to the governor the final say in granting parole for all prisoners serving life sentences for murder, which—in this tough-on-crime era—has meant nearly all such parole requests have been denied whether there’s a Republican governor or a Democratic one in Sacramento. Arnold Schwarzenegger somewhat and Jerry Brown more dramatically have begun to reverse this trend. Before this change, 4,800 inmates were serving life sentences in California.

With 25 years experience in correctional planning and research, Austin cited several examples in other states and other parts of California that could counter efforts by the LA County Sheriff’s Department and Sheriff Lee Baca to build a $1 billion jail to house more inmates in replacing the decrepit Men’s Central Jail.

Austin noted that Contra Costa County has an incarceration rate one-half the rest of the state, achieved principally through probation reform. By shortening probation terms from three to five years down to 18 months or less, Contra Costa has dramatically reduced its recidivism rates and probation caseloads.

“Also, New York City has an incarceration rate one-quarter the rest of the country, thanks to policing changes,” said Austin. “Police have enormous discretion to arrest someone for a felony or a misdemeanor.”

“And police need to be part of the solution,” Austin continued. “Yes, there are dangerous people out there who need to be locked up, but many others are locked up who need help with substance abuse, not prison sentences.”

How Reducing the Prison Population Improves Crime Rates - In “How New York City Reduced Mass Incarceration,” coauthored with Michael Jacobson, Austin reports that changes in New York City’s policing policies drove down its state’s prison population from 71,000 inmates in 2000 to 59,000 in 2009—a remarkable 17 percent drop at a time with California population soared to 173,000 in 2006.

“Broken Windows” advocates attribute these remarkable improvements to more aggressive policing policies by the New York Police Department—and even to its controversial “Stop and Frisk” program.

“Instead of waiting for a felony to happen and making an arrest, cops now nab offenders for less serious crimes, which at most sends them to jail for a few days or weeks but interrupts the arrestees’ more serious criminal activities,” writes Heather Mac Donald in the National Review.

But Austin and others attribute the declining crime rate more to changes in demographics, an aging of the population, and a decrease in illicit drug markets. And the major influence was New York’s efforts to treat drug addiction more as a public health issue and less a criminal one, which have reduced felony arrests, improved crime rates, and lessened prison and probation rates.

“It is no coincidence that New York State has the largest network of Alternative to Incarceration programs in the country and, that unlike other large states such as California, Florida and Texas, it has seen crime and incarceration rates plummet simultaneously—improving public safety and saving much-needed revenue,” write the ACLU’s Kara Dansky and the Fortune Society’s Glenn E. Martin.

Saner approaches to policing practices as Austin pointed out and better and more humane support for people returning to their communities from prison as Burton called for could do much to inform California’s and LA’s debate about its mass incarceration debacle.

Upcoming discussions at USC and the Pat Brown Institute will further this discussion:

The Pat Brown Institute event will be held at the National Center for the Preservation of Democracy, 100 N. Central Avenue, Los Angeles.

(Dick Price is the editor of LAProgressive.com where this piece was first posted. Follow him and other gifted progressive voices at laprogressive.com)
-cw