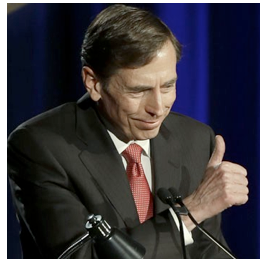 PARTIAL CONFESSION AT USC - It was awfully heartwarming to see The Man Called Petraeus apologize for the sin of committing adultery, something which every person in American has a stake and an interest.  It's all good now. He's a fine upstanding citizen again.

Luckily nobody will ever ask for an apology for this:

The Pentagon sent a US veteran of the "dirty wars" in Central America to oversee sectarian police commando units in Iraq that set up secret detention and torture centres to get information from insurgents. These units conducted some of the worst acts of torture during the US occupation and accelerated the country's descent into full-scale civil war.

Colonel James Steele was a 58-year-old retired special forces veteran when he was nominated by Donald Rumsfeld to help organize the paramilitaries in an attempt to quell a Sunni insurgency, an investigation by the Guardian and BBC Arabic shows.

After the Pentagon lifted a ban on Shia militias joining the security forces, the special police commando (SPC) membership was increasingly drawn from violent Shia groups such as the Badr brigades.

A second special adviser, retired Colonel James H Coffman, worked alongside Steele in detention centres that were set up with millions of dollars of US funding.

The allegations, made by US and Iraqi witnesses in the Guardian/BBC documentary, implicate US advisers for the first time in the human rights abuses committed by the commandos. It is also the first time that Petraeus – who last November was forced to resign as director of the CIA after a sex scandal – has been linked through an adviser to this abuse.

Coffman reported to Petraeus and described himself in an interview with the US military newspaper Stars and Stripes as Petraeus's "eyes and ears out on the ground" in Iraq.

"They worked hand in hand," said General Muntadher al-Samari, who worked with Steele and Coffman for a year while the commandos were being set up. "I never saw them apart in the 40 or 50 times I saw them inside the detention centres. They knew everything that was going on there ... the torture, the most horrible kinds of torture."

You can see the documentary here.  But don't watch it on a full stomach. It will make you sick.

(Digby is the pseudonym of progressive political blogger Heather Parton from Santa Monica, California who founded the blog Hullabaloo… where this commentary first appeared.)
-cw