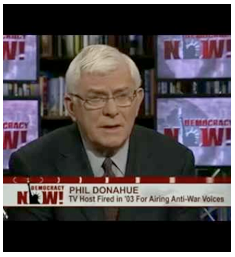 GUEST WORDS - I am not sure exactly when the death of television news took place.

The descent was gradual—a slide into the tawdry, the trivial and the inane, into the charade on cable news channels such as Fox and MSNBC in which hosts hold up corporate political puppets to laud or ridicule, and treat celebrity foibles as legitimate news. But if I had to pick a date when commercial television decided amassing corporate money and providing entertainment were its central mission, when it consciously chose to become a carnival act, it would probably be Feb. 25, 2003, when MSNBC took Phil Donahue off the air because of his opposition to the calls for war in Iraq.

Donahue and Bill Moyers, the last honest men on national television, were the only two major TV news personalities who presented the viewpoints of those of us who challenged the rush to war in Iraq. General Electric and Microsoft—MSNBC’s founders and defense contractors that went on to make tremendous profits from the war—were not about to tolerate a dissenting voice.

Donahue was fired, and at PBS Moyers was subjected to tremendous pressure. An internal MSNBC memo leaked to the press stated that Donahue was hurting the image of the network. He would be a “difficult public face for NBC in a time of war,” the memo read. Donahue never returned to the airwaves.

They do not challenge or acknowledge the structures of corporate power. Their role is to funnel viewer energy back into our dead political system—to make us believe that Democrats or Republicans are not corporate pawns.

The cable shows, whose hyperbolic hosts work to make us afraid of self-identified liberals or self-identified conservatives, are part of a rigged political system, one in which it is impossible to vote against the interests of Goldman Sachs, Bank of America, General Electric or ExxonMobil. These corporations, in return for the fear-based propaganda, pay the lavish salaries of celebrity news people, usually in the millions of dollars.

They make their shows profitable. And when there is war these news personalities assume their “patriotic” roles as cheerleaders, as Chris Matthews—who makes an estimated $5 million a year—did, along with the other MSNBC and Fox hosts.

What mattered then and what matters now is likability—known in television and advertising as the Q score—not honesty and truth. Television news celebrities are in the business of sales, not journalism.

They peddle the ideology of the corporate state. And too many of us are buying.

The lie of omission is still a lie. It is what these news celebrities do not mention that exposes their complicity with corporate power. They do not speak about Section 1021 of the National Defense Authorization Act, a provision that allows the government to use the military to hold US citizens and strip them of due process.

They do not decry the trashing of our most basic civil liberties, allowing acts such as warrantless wiretapping and executive orders for the assassination of US citizens. They do not devote significant time to climate scientists to explain the crisis that is enveloping our planet. They do not confront the reckless assault of the fossil fuel industry on the ecosystem.

They very rarely produce long-form documentaries or news reports on our urban and rural poor, who have been rendered invisible, or on the wars in Iraq and Afghanistan or on corporate corruption on Wall Street. That is not why they are paid. They are paid to stymie meaningful debate.

They are paid to discredit or ignore the nation’s most astute critics of corporatism, among them Cornel West, Medea Benjamin, Ralph Nader and Noam Chomsky. They are paid to chatter mindlessly, hour after hour, filling our heads with the theater of the absurd.

They play clips of their television rivals ridiculing them and ridicule their rivals in return. Television news looks as if it was lifted from Rudyard Kipling’s portrait of the Bandar-log monkeys in “The Jungle Book.” The Bandar-log, considered insane by the other animals in the jungle because of their complete self-absorption, lack of discipline and outsized vanity, chant in unison: “We are great. We are free. We are wonderful. We are the most wonderful people in all the jungle! We all say so, and so it must be true.”

When I reached him by phone recently in New York, Donahue said of the pressure the network put on him near the end, “It evolved into an absurdity.” He continued: “We were told we had to have two conservatives for every liberal on the show. I was considered a liberal. I could have Richard Perle on alone but not Dennis Kucinich. You felt the tremendous fear corporate media had for being on an unpopular side during the ramp-up for a war. And let’s not forget that General Electric’s biggest customer at the time was Donald Rumsfeld [then the secretary of defense]. Elite media features elite power. No other voices are heard.”

“Here is this kid lying there whacked on morphine,” Donahue said. “His mother, as we are standing by the bed looking down, explained his injuries. ‘He is a T-4. The bullet came through the collarbone and exited between the shoulder blades. He is paralyzed from the nipples down.’ He was emaciated. His cheekbones were sticking out. He was as white as the sheets he was lying on. He was 24 years old. … I thought, ‘People should see this. This is awful.’ ”

Donahue noted that only a very small percentage of Americans have a close relative who fought in Iraq or Afghanistan and an even smaller number make the personal sacrifice of a Tomas Young.

“Nobody sees the pain,” he said. “The war is sanitized.”

But once again Donahue ran into the corporate monolith: Commercial distributors proved reluctant to pick up the film. Donahue was told that the film, although it had received great critical acclaim, was too depressing and not uplifting. Distributors asked him who would go to see a film about someone in a wheelchair. Donahue managed to get openings in Chicago, Seattle, Palm Springs, New York, Washington and Boston, but the runs were painfully brief.

“I didn’t have the money to run full-page ads,” he said. “Hollywood often spends more on promotion than it does on the movie. And so we died. What happens now is that peace groups are showing it.

We opened the Veterans for Peace convention in Miami. Failure is not unfamiliar to me. And yet, I am stunned at how many Americans stand mute.”

(Chris Hedges, whose column is published Mondays on Truthdig, spent nearly two decades as a foreign correspondent in Central America, the Middle East, Africa and the Balkans. He has reported from more than 50 countries and has worked for The Christian Science Monitor, National Public Radio, The Dallas Morning News and The New York Times, for which he was a foreign correspondent for 15 years. This column was posted first at truthdig.com) –cw