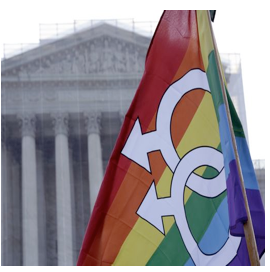 EQUAL RIGHTS - Midway through Tuesday’s generally lackluster oral argument in Hollingsworth v. Perry on the constitutionality of Proposition 8, the ballot measure banning same-sex marriage in California, the Supreme Court’s resident right-wing curmudgeon, Antonin Scalia, posed two theoretical and baiting questions rooted in his “originalist” interpretation of the Constitution that struck at the heart of the case.

“When do you think it became unconstitutional [to prohibit gay marriage]? Has it always been unconstitutional?” Scalia asked attorney Ted Olson, the former Republican solicitor general in the George W. Bush administration who, along with liberal litigator David Boies, represents the two gay couples who brought the original federal challenge to the proposition. Without a clear answer, Scalia said, he would be unable to rule in Olson’s favor.

But instead of responding to the inquiry decisively and asserting that gay marriage should have been recognized the day the 14th Amendment and the equal protection clause were ratified, Olson hemmed and stammered, admitting at one point that he didn’t have an answer and protesting at another juncture that the high court had not similarly required the litigants in Brown v. Board of Education to specify when the “separate but equal” doctrine became unconstitutional. Only weakly and tentatively did he recover and suggest that constitutional rights had to be understood in the context of a cultural and “evolutionary cycle.”

By any measure, Olson lost the sparring match with Scalia and with it an important opportunity to underscore the point that regardless of its precise time of origin, the basic right of all Americans—gay and straight—to wed could no longer be denied.

Fortunately, Olson didn’t lose the entire lawsuit. He also didn’t alter the likely outcome in both Hollingsworth and the case of Windsor v. United States—argued Wednesday on the validity of the federal Defense of Marriage Act (DOMA)—which is that the justices will hand down narrow and sharply divided opinions that will advance the cause of marriage equality but fail to articulate a clear nationwide constitutional right to same-sex marriage.

Short of handing a sweeping victory to either side—establishing a fundamental 50-state right to marry on the one hand or upholding Proposition 8 on the other—the court has multiple options available to craft a ruling that would leave both sides dissatisfied but would nonetheless hand the proponents of marriage equality a practical win.

Substantively, the court could follow the Obama administration’s suggestions and adopt the “eight-state solution,” declaring that those states that currently recognize same-sex civil unions must offer full-fledged same-sex marriages. The court also has the option to limit the scope of its ruling to California, as the 9th US Circuit Court of Appeals did when it invalidated Proposition 8 early last year.

The court also could hold on procedural grounds, as many of the justices hinted during the arguments, that the proponents of Proposition 8 lack legal standing to prosecute the case because they are not official agents of the state, which has declined to defend the measure. In that event, the court would dismiss the appeal, which would in turn reinstate the order handed down in 2010 by U.S. District Judge Vaughn Walker, who overturned Proposition 8 on equal protection grounds as lacking any rational legal basis. The result: Same-sex weddings in California would resume.

It’s also possible a majority of justices could vote to dismiss the appeal as “improvidently granted” because they believe they never should have agreed to hear the case in the first place. Or the justices could prove unable to reach majority consensus on any basis, which would have the same net effect of a dismissal, except that the 9th Circuit’s anti-Proposition 8 ruling would be reinstated rather than Walker’s. Either way, gay marriage would be legal again in the nation’s most populous state, even if it would not be directly authorized elsewhere.

Standing questions were also front and center during the first hour of oral arguments in Windsor since the Obama administration has declined to defend DOMA, leaving that task to House Republicans who may not have the legal right to speak on behalf of the federal government on the issue.

As in the Proposition 8 case, a dismissal in Windsor would effectively restore the prior decision of the 2nd US Circuit Court of Appeals, which covers New York, Connecticut and Vermont and struck down DOMA’s definition of marriage as a union only of heterosexuals.

This in turn would likely mean that in 2nd Circuit jurisdictions, all of which currently recognize gay marriages, same-sex couples could begin to receive federal benefits—such as the favorable tax treatment that plaintiff Edith Windsor was denied—on the same basis as straight ones.

Should the court resolve the standing problem and issue a substantive decision on the merits in Windsor, a five-vote majority, headed by Justice Anthony Kennedy, appears prepared to strike down DOMA’s definition of marriage and extend federal benefits to homosexual couples in all nine states that presently recognize gay marriage. Such a ruling would not alter the definition of marriage in the remaining 41 states that do not allow same-sex couples to wed.

As every seasoned student of the Supreme Court knows, it’s never easy to predict the outcome of its cases based on oral arguments. But three takeaways from those offered in Hollingsworth and Windsor nonetheless seem sound.

First, no arguments appear capable of moving the court’s reactionary troika of Scalia, Samuel Alito and Clarence Thomas into the 21st century.

Second, the current court as a whole led by Chief Justice John Roberts remains arguably the most conservative high tribunal since the early 1930s.

Third and most important, no court—even this one—operates in a legal vacuum. Courts, like all public institutions, are creatures of politics and history. On the issue of marriage equality, the days of separate but equal are nearing an end. Sooner or later, the nation’s highest legal body will have to recognize the inevitable or find a way to step aside.