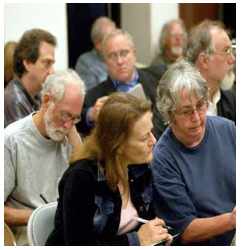 VOICES FROM THE SQUARE - Everyone knows the standard public meeting in America: formal agenda handouts, official presentations, and three-minute speeches at the microphone for citizens. It’s boring. It doesn’t work.

And it’s mysterious—because the past two decades have seen the development of meeting strategies and online tools to change all that, to make meetings truly productive and dynamic. So why don’t American public meetings change?

One major obstacle is legal. The country’s open meetings and records laws include many specific, rigid requirements for how elected officials communicate, meet, and make decisions. For instance, California’s Brown Act severely limits communication between elected officials outside of formal meetings. So a school district that uses an online tool to put members of the school board together with parents may very well be violating the law.

While there are often good reasons behind the laws, many of the rules are unclear, and changes in technology and society have made them even harder to interpret. Lawyers fear that if the standardized procedures are junked and citizens are allowed to participate directly in budgeting or planning decisions, either online or in person, any decisions they make will be under a legal cloud.

Since the old processes of citizen participation offer little real interaction or deliberation, citizen turnout is usually very low; lawmakers often refer to the few people who turn up as the “usual suspects.” On the other hand, if the community has been gripped by a controversy, turnout is often high, and the three-minute commentaries from citizens can last long into the night. (One of the more popular video compilations on YouTube is a set of outrageous three-minute statements by citizens and responses by public officials, culled from public meetings all over the country.)  But neither extreme is helpful.

Many local leaders understand that society and technology have changed, and they want to use new online tools and engagement processes. They also want to involve citizens more directly in budget cuts and other difficult decisions. “If we think we’re going to come out of this recession and expect everything to go back to normal, we’ve got another think coming,” Harry Jones, county executive of Mecklenburg County, North Carolina, once told me. “We need to reach out and reframe our relationship with citizens—the people who are the ultimate source of our revenues.”

Over the last two decades, Jones and many other local leaders have pioneered a new generation of participation practices. These include the use of citizens’ juries and other deliberative processes that allow large, diverse groups of residents to tackle hard questions. And there are a burgeoning array of online tools to report problems, generate and rank ideas on government policy, work in small action teams, and visualize options for public budgeting and land use planning.

The trouble is most of these efforts occur outside the scope of official citizen participation processes and the laws that govern them. This has created a host of legal headaches for public officials who want to engage the public but don’t want to face legal penalties or be subject to litigation.

Simply put, opening the doors to civic engagement requires new rules. Over the last year, a working group of scholars and local officials from around the country has drafted model state and local laws that would support more effective forms of public participation. These model laws would exempt new types of civic engagement processes from judicial review, as long as the processes were sound and followed principles of transparency and fairness, with records of engagement made public and processes open to rigorous evaluation.

In the 1980s and ’90s, laws on alternative dispute resolution were enacted to give Americans new alternatives to judicial proceedings. Something similar is required for public participation. We must free elected officials and decision makers to engage the public, even as we uphold the goals of transparency and accountability.

Reaching out to constituents, and making policy with their collaboration, is the essence of democracy. When our public officials try to do this, the law should be on their side.

(Matt Leighninger is executive director of the Deliberative Democracy Consortium, an alliance of the major organizations and leading scholars working in the field of deliberation and public engagement. This column was posted first at ZocaloPublicSquare.org … connecting people with ideas and offering other important writers and dialogue.)