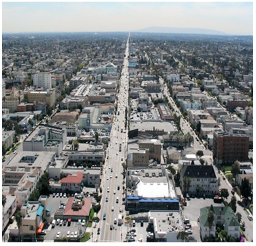 CALWATCHDOG - Los Angeles obviously doesn’t work. The election of a new mayor, the first phase of which was held Tuesday, won’t help.

LA’s schools are among the worst in the country. Driving through the city is an obstacle course the roads are so bad. The city is visibly deteriorating.

The problem is not democracy, but the lack of democracy. The city council has 15 members for 3.8 million people. That’s one council member for every 253,000 people. How can the council possibly be responsive to what people need? Can you keep track of 253,000 people?

As with most cities in California, the council is held hostage by the ultra-powerful public-employee unions, which demand — and usually get — massive pay, perks and pensions. The pension situation is so bad the city is on the verge of bankruptcy.

’72 Suburbs’-Dorothy Parker once said LA was “72 suburbs in search of a city.” Well, if we break it up into those 72 suburbs, the new cities would be uneven in population, but the average would be about 53,000 per city.

Wouldn’t this duplicate government offices and increase costs to taxpayers? Not if it’s done right. The members of the new city councils would not be paid for their jobs. City Halls, instead of being gigantic “Taj Ma City Halls,” would be in strip-mall storefronts.

As Costa Mesa is trying to do, most city services would be outsourced to private companies. Fire departments would be of the voluntary kind. Police could be contracted out to the county sheriffs, or perhaps contracts could go to groups of cities forming competitive departments.

The LA Unified School District would be abolished. In its place — assuming the new cities even have public schools — would be 72 new school districts, all of them merely doing administrative work for charter schools, on the New Orleans 100 percent charter model.

Of course, the major resistance would come from the unions. But the bankruptcy of the current LA would take care of much of that.

The politicians also wouldn’t like it. The mayor of huge Los Angeles automatically becomes a statewide, even national player. I remember when Sam Yorty ran for president back in 1972.

And outgoing Antonio Villaraigosa often has been talked about as a gubernatorial candidate or to get a cabinet position in the Obama White House.

Political ambition aside, breaking up LA would do wonders for the people who live there. They could control their own affairs democratically at the small, local level, instead of trying to work through the immense city bureaucracy or the remote city council.

Breaking up LA is a reform whose time has come.

(John Seiler, an editorial writer with The Orange County Register for 19 years, is the managing editor for CalWatchDog.com where this column was first posted.)
-cw